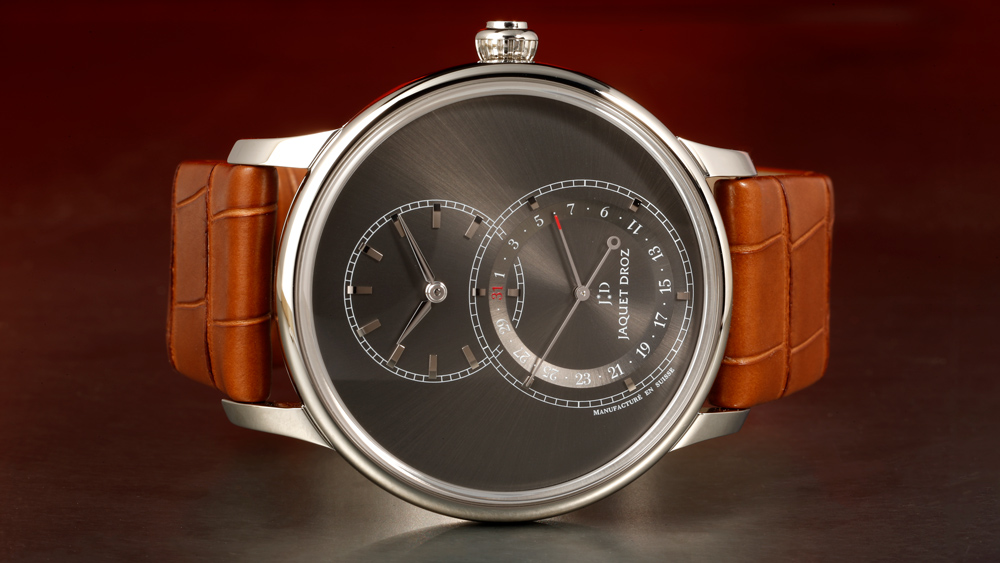 Though first unveiled in 2011, the Grande Seconde Quantième remains a bit of an overshadowed gem. When most collectors think of Jaquet Droz, elaborate automata like the Charming Bird, or the painstakingly crafted dials of the Thousand Year Lights or Paillonné Enamel pieces. Meanwhile, the many variations within the Grande Seconde line make a compelling case as a well-executed and understated dress watch.

By and large the collection has relied on very traditional aesthetics, pairing roman numerals with traditionally crafted enamel and lacquer dials. New for 2017, this Anthracite-dialed variant ($9,500) boasts the same high-caliber execution as its sibling in a slightly more modern guise. We took a closer look at the larger of the pair (it is available in both 39 mm and 43 mm versions) in this week’s installment of Watch of the Week.

The Grande Seconde Quantième is one of the watch industry’s shining executions of minimalism. Though its time indication is splintered into a smaller upper subdial for hours and minutes at twelve o’clock and a larger subdial at six indicating seconds and the current date, the piece is still quite legible overall. Its slightly warm anthracite grey dial is nicely paired with a handcrafted brown alligator strap with rolled edges that wears very comfortably on the wrist.

Speaking of its dial, the satin-brushed finish seen on this piece is an interesting take on the technique. Rather than a simple radial pattern, Jaquet Droz centers the pattern around its lower subdial. The applied indices are made of 18-carat white gold, and are immensely reflective in lower light. One detail we’ve always appreciated with the Grande Seconde collection as a whole is the profile of its case. At 43 mm, the piece wears somewhat large for a dress watch, however the case tapers in from the dial side to its caseback. This details significantly improves wearing comfort on smaller wrists, though in many cases the better vote would be to size down to the 39mm if you’re looking to maintain more conventional dress watch proportions. That said, taller and heftier fellas in the room will no doubt be satisfied by the larger version, which is carries the same retail price as its sibling.

As with all things from the brand, the Grande Seconde Quantième is no slouch in the movement department. Its in-house manufactured 2660Q2.P self-winding caliber uses a pair of mainspring barrels to deliver a power reserve of 68 hours. A silicon balance spring is employed, improving the movement’s stability and efficiency. The Quantième was the first instance where the brand turned to silicon, and it has since been integrated into the balance of the brand’s catalog. The movement is elegantly finished with radial Geneva stripes, and is wound by a partly skeletonized and well-decorated rotor.

The color palette of the anthracite Quantième certainly lends itself to the colors and textures of autumn attire. A few of the looks inspired by the film Kingsman: The Golden Circle that have landed on Mr. Porter would make a fine pairing, as would some of the wool coats and cashmere sweaters recently unveiled by Santoni. Focusing in on footwear, the dress hiker boots from Berluti and Brunello Cucinelli we recently featured would complement the piece’s alligator strap perfectly.

The Grande Seconde Quantième Satin-Brushed Anthracite has arrived and is available through Jaquet Droz boutiques, the Swatch Group-owned Tourbillon boutiques, and select retail partners around the globe.