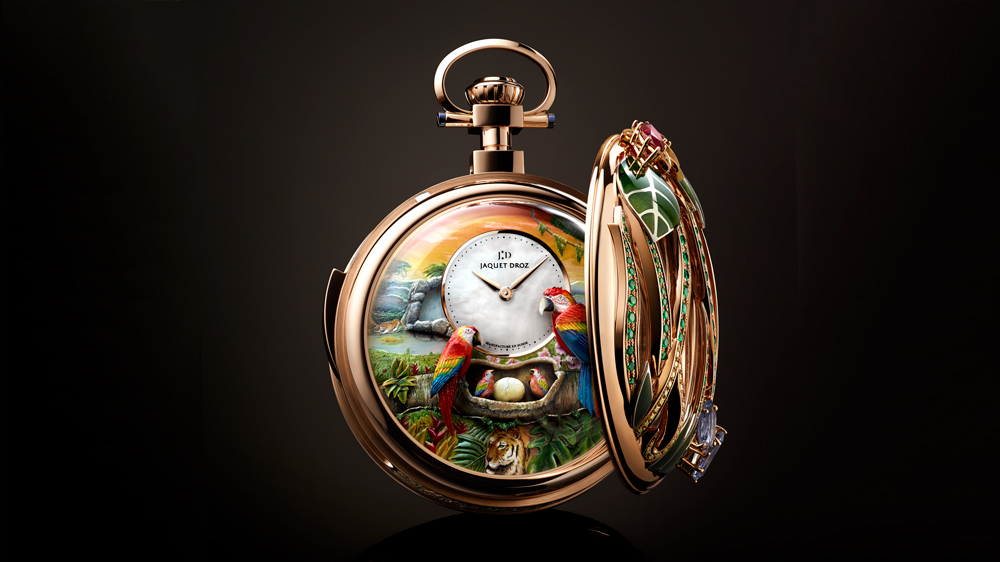 Jaquet Droz has a storied history of creating automata, the ancient and technically difficult technique of creating lifelike scenes through moving mechanical devices—the precursors to modern androids. Today we have everything from iPhones, artificial intelligence, and virtual reality to rendered real-life experiences through technical innovation, which means the art of automata is typically seen behind museum glass. But some watchmakers, like Jaquet Droz, have carried the preservation of the artisanal craft into the 21st century. This year, the Swiss watchmaker unveiled an automata signing machine that can sign your signature or any message of your choosing, as well as a new Tropical Bird Repeater wristwatch for its automata collection that is limited to just eight pieces ($661,500). Now it has introduced an even more exclusive-version automata timepiece in a one-of-a-kind minute Parrot Repeater pocket watch ($1,050,000).

The automata function is similar in concept to its Bird Repeater wristwatch from 2012 in that it features two birds hovering over a pair of chicks and an egg, but instead of a pair of Blue Tits (native to Jaquet Droz’s home in the Jura Valley of Switzerland) the pocket watch displays a pair of exotic parrots. The scene comes to life when the left-hand bird moves its entire body and its partner on the right wiggles its head. A chick hatches from its egg while a sibling chick hops back and forth. The tree trunk, birds, and nest are gold appliqués painted and then applied by hand to the dial. Surrounding the scene is a jungle of vines and hibiscus, rendered through miniature painting and engraving, and a tiger pauses at the foot of an animated waterfall. Another tiger is located beneath the macaws at six o’clock. A mother-of-pearl dial with two gold hands keeps the time and is surrounded by a red-gold case, which is adorned with a stunningly colorful array of gems set painstakingly by hand.

In person, the 56 mm Parrot Repeater pocket watch is every bit as magnificent as described, and when its RMA88, minute-repeater, hand-winding movement springs the timepiece into action, time seems to stand still as you watch the timepiece come to life. It’s a piece that preserves the history of this exceptional craft that sprang forth from the Jaquet Droz manufacture 280 years ago and delighted the kings and emperors of Europe, China, India, and Japan throughout the 18th and 19th centuries.