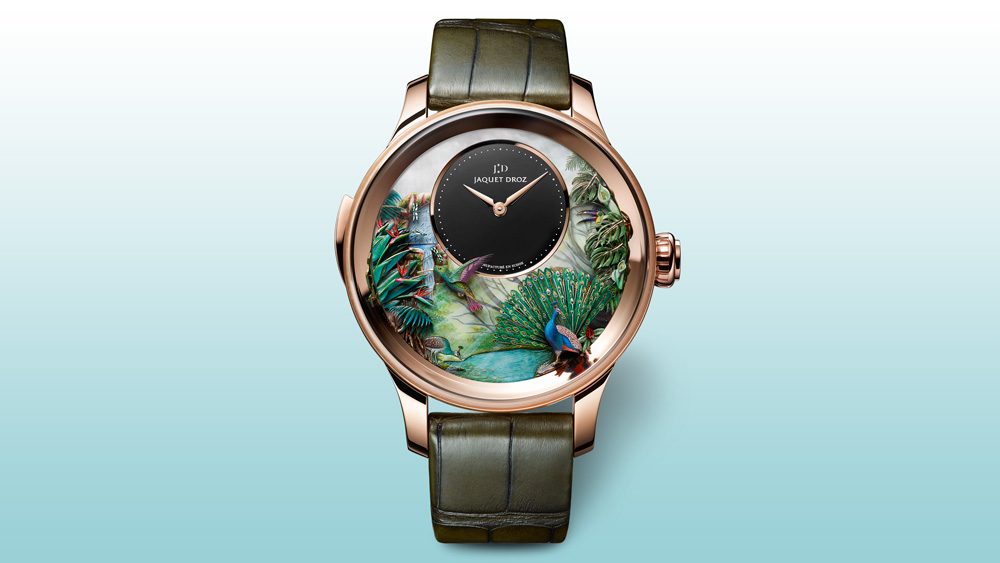 In 2012 Jaquet Droz released the stunning Bird Repeater (from $472,500). The watch expertly combined the minute repeater (an on-demand chiming complication with two hammers and two extended gongs) and miniscule automata (mechanical depictions of animals/humans). On the foundation of its movement, the RMA88, a series of limited editions have been produced, each featuring a slight deviation from the same underlying complications.

Fast-forward to 2017, where Jaquet Droz has released the Tropical Bird Repeater ($661,500), a dramatic and colourful evolution of the 2012 watch. The Tropical Bird Repeater is powered by the RMA89, a very similar movement to the RMA88—however a brief glance at the dial suggests that there have been some notable changes. Indeed, with the RMA88, an entirely new series of animations are depicted on the dial, which we shall cover shortly.

The dial-side of the Tropical Bird Repeater, even in static unwound form, is magnificent. The main dial is mother of pearl and provides six layers of hand-engraved and hand-painted 18-karat red gold. A dark onyx timekeeping subdial offsets it. A small aperture sits at 9 o’clock, beneath which rotates a running seconds disc that provides a constant animation of cascading water. This waterfall animation is the only automaton powered and regulated by the timekeeping gear train, and subsequently the increased frequency of the RMA89 serves to provide a very slightly smoother impression of flowing water than its predecessor (one extra transition per second).

There are a number of hand-engraved red gold animals that have gathered by this sun-dappled pool in a tropical forest, and six of them are automata that come to life when the repeater slide on the caseband is activated. In the foreground of the waterfall at 9 o’clock, three dragonflies (their wings contain Super-LumiNova®) move about a set of orchids. A hummingbird occupies the space at 7 o’clock; its wings beat at a staggering forty times per second as it retracts its beak from the orchids flower. Next, a peacock sits coyly across from the pool, and as the hummingbirds dance fades it twice fans out a set of beautifully hand-engraved and painted tail feathers. The final automaton is the toucan, whose moving beak is made visible by the opening of two ferns.

The entire sequence plays out in conjunction with the chimes of the cathedral gongs and is so captivating that it is sure to be activated several times before the minute passes. The leopard, however, appears to have seen it all before, and is barely conscious.

The view from the back of the watch reveals a familiar scene when comparing the RMA89 and RMA88: a single barrel movement with two hammers and two cathedral gongs, each of the latter making nearly two complete circumnavigations of the periphery. On closer inspection, there are small differences: a different gear train bridge format, the governor for the repeater (which regulates the release of the repeater power) is visible, and the jewel bearing for the balance wheel is a brilliant cut ruby.

The Tropical Bird Repeater is currently available in a limited run of 8 pieces, each in 18-karat red gold, with hand engraving on the lugs and band of the 47mm case.