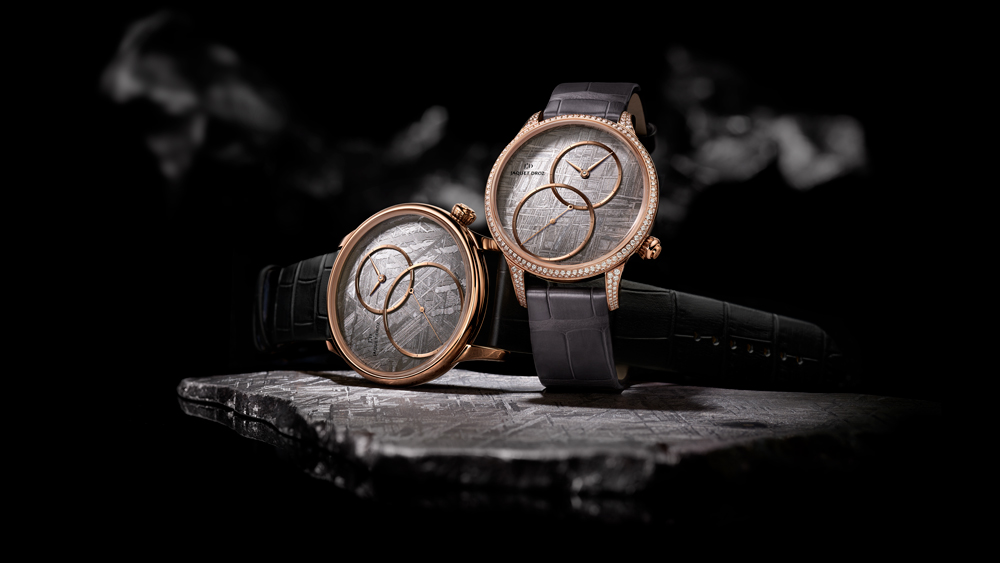 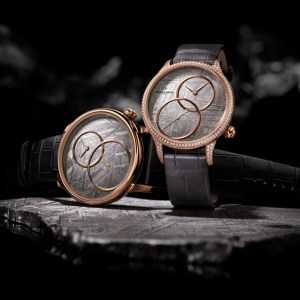 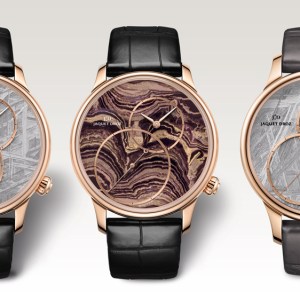 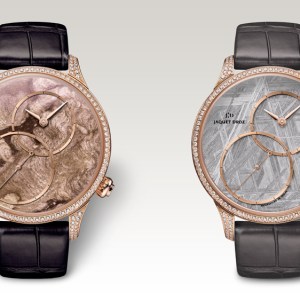 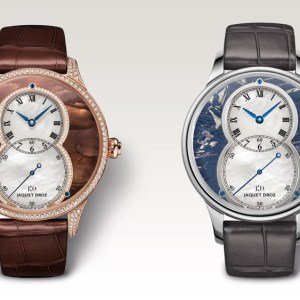 As a 280-year-old brand, it is hard to believe Jaquet Droz introduced its most recognizable model, the Grande Seconde, only 16 years ago in 2012. The signature design, however, is based on a historic pocket watch and has served the brand well as a foundation for a variety of both classic and modern designs. The Grande Seconde is not only unique as a collection, but also as a versatile design that lends itself to seemingly endless interpretations. We’ve seen moonphase versions, skeletonized versions, and grand feu enamel dials that highlight the minimalism of its aesthetic. It is one of those designs that can be interpreted as classic, modern, métiers, masculine, or feminine. The latest is a mineral dial in two limited series: the Off-Centered Meteorite and the Stromatolite. According to Jaquet Droz, these two materials symbolize “the origins of life and the farthest reaches of the cosmos.”

A meteorite is a meteor—a rocky body orbiting the sun—that survives entry through the Earth’s atmosphere. It is composed of iron and nickel and makes an ideal dial material because of its density and hardness. Cutting and finishing a meteorite dial is a job that requires time and skill, but the payoff is a beautiful, organic sheen with a subtle matrix, and each dial is one of a kind. The gray-hued meteorite is ideally paired here with a pink-gold case and registers as one of the most minimalist interpretations of the Grande Second design. Even the diamond version is more dress watch than jewelry watch, and it could easily be worn by either a man or woman.

Stromatolite, unlike meteorite, is not from outer space. It is an earthly mineral—a fossilized sedimentary rock that dates back to the Precambrian period, 3.5 billion years ago. The look is a bit more organic than the meteorite dial. While meteorite is a sleek steel-gray, the colors of stromatolite can range from brown/beige and gold to reddish/gray and pink, with a curved rather than angular matrix. As with meteorite, each stromatolite dial is unique.

In these new mineral dial pieces, the model’s signature overlapping registers are skewed off-center so that the larger seconds subdial is slightly to the left of six o’clock and the upper hour and minute register is slightly to the right of 12 o’clock. The visual effect calls to mind orbiting planets rather than the straight-on, figure-8 impression of the traditional Grande Seconde dial. There are three series of 88 pieces each—88 being a nod to the 8 formed by the overlapping registers—in this case a sideways 8 if you are looking at the dial straight on. There is a 39 mm model ($23,800 in meteorite and $27,600 in stromatolite), a 39 mm model set with diamonds ($33,000 in meteorite and $36,800 in stromatolite), and a 43 mm model ($25,900 in meteorite and $29,700 in stromatolite).

The 39 mm versions contain the Jaquet Droz automatic Caliber 2663P, and the 43 mm versions<CE: Does the 43 mm model come in a diamond version, too? Wasn’t mentioned in the previous paragraph.> contain the Jaquet Droz automatic Caliber 2663A.P, both with silicon balance and pallet horns and a double mainspring barrel for a 68-hour power reserve. The diamond version in the 39 mm size is set with 280 diamonds totaling 1.67 carats. The straps come in gray or black alligator, and an individual serial number is engraved on the back of each 18-karat red-gold case.