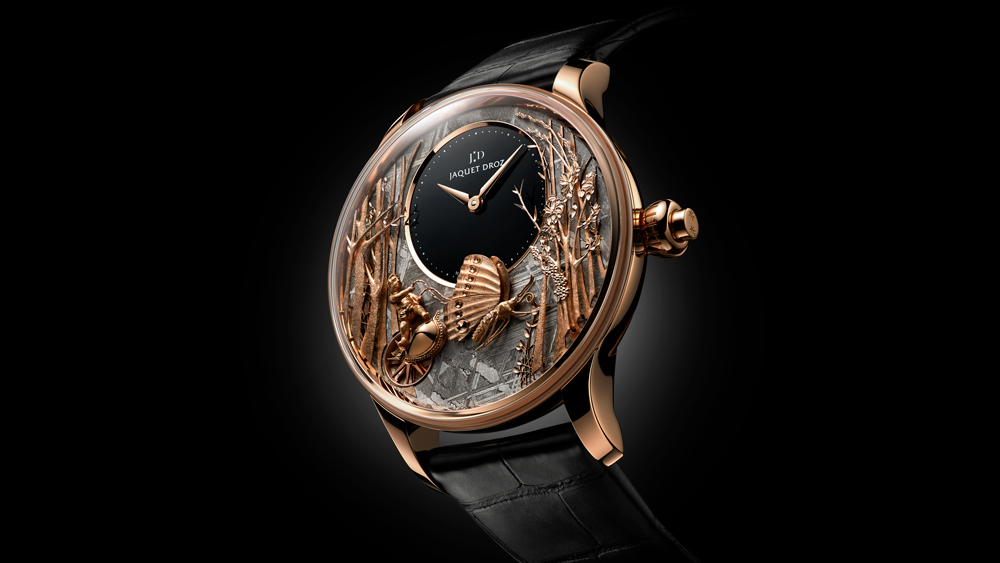 Jaquet Droz makes watches for people who demand more of their timepieces than mere utilitarian function—the intricate automaton watches are real showpieces in both aesthetic and old-world watchmaking expertise. The Loving Butterfly follows the Charming Bird in a long line of whimsical automaton creations by Jaquet Droz. These watchmaking wonders are collectibles akin to an expensive wind-up toy made of 18-karat gold and precious materials, which take an extraordinary amount of hours to create and can only be conceived at the hands of top watchmakers.

The latest of these rare creations from Jaquet Droz can be set into action through the press of a button at the top of the crown. The butterfly on the dial comes to life through the beat of its wings leading the spinning wheels of a chariot mounted by a grinning cherub. The wheel of the chariot appears to turn quickly because of an optical illusion created by the combination of fixed and mobile spokes. The performance lasts 90 seconds, during which time the butterfly flutters its wings 300 times. 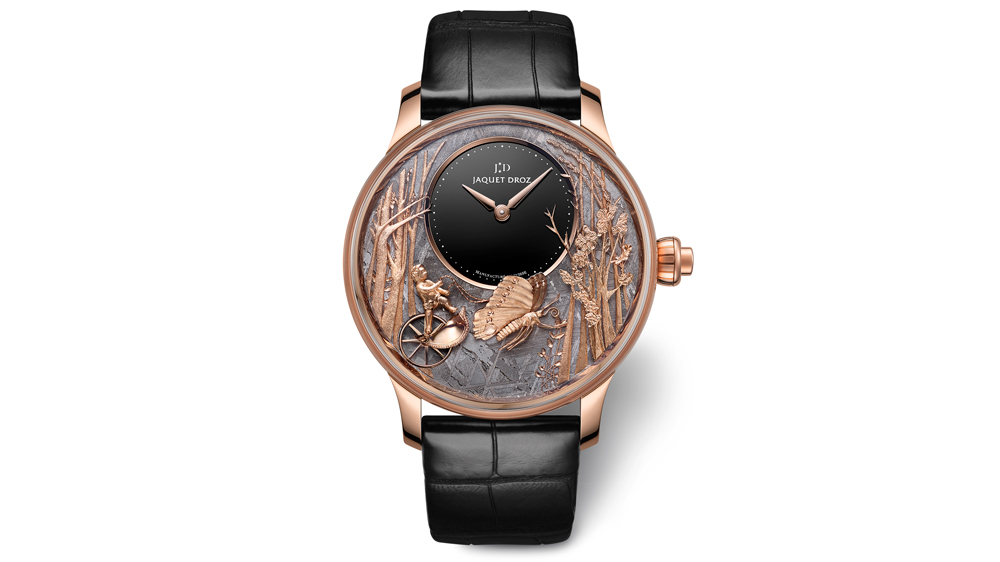 The timepiece carries on the tradition of the company’s 200-year history of creating automatons and animations. Company founder Pierre Jaquet Droz’s first automatons were created as advertisements to attract new clients and impress nobility during the 1700s. They were the ancient precursors to robots. One of his most famous inventions was an android-like automation called “The Draughtsman,” programmed to draw sketches—a modern version unveiled earlier this year, can sign your signature or any custom message of your choosing.

Another early creation was that of a cherub in a chariot drawn by a butterfly, which is, of course, the inspiration for this new model. The motif is based on the story of Cupid and Psyche, an ancient Greek myth about love and trust, but the narrative here a statement on the fleeting nature of time. The animated scene on the dial is composed of 40 pieces of 18-karat red or white gold that have been hand-engraved in painstakingly, intricate detail. You can see the grooved bark on the micro-millimeter-sized tree trunks (representing the forests of watchmaking’s La Chaux-de-Fonds region of Switzerland), and the butterfly’s articulated legs and life-like antennae. The face on the cherub is carved to resemble that of none other than Pierre Jaquet Droz. 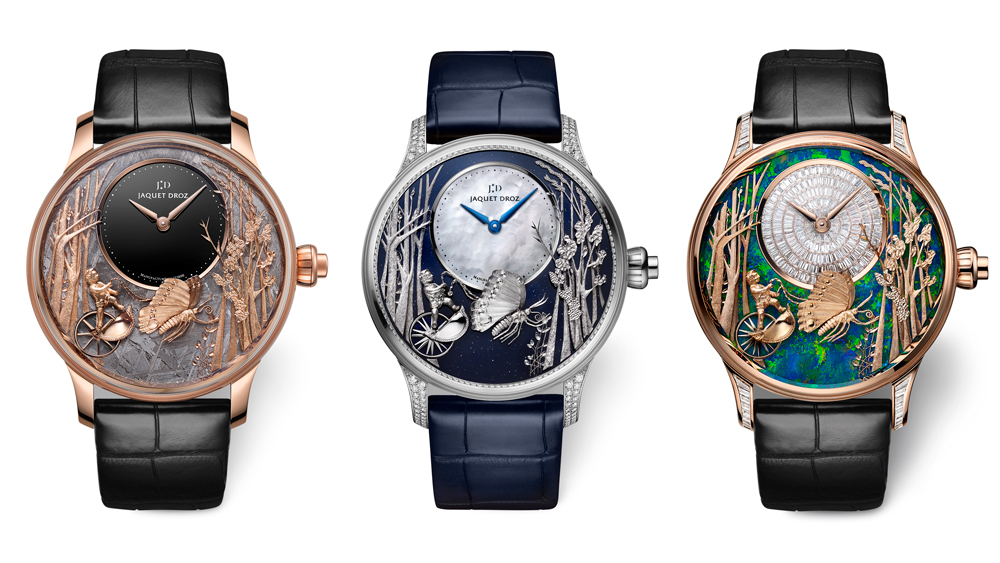 The first iteration of the modern-day Loving Butterfly was introduced in 2017, with a background dial of black onyx or mother-of-pearl. There are three new versions: a meteorite dial with hour and minute hands on an onyx background; a mother-of-pearl dial with hour and minute hands on an aventurine background and composition in 18k white gold; and an opal background with an hour and minute dial with 1.80 carats of invisibly set, baguette-cut diamonds that radiate from the center of the dial and on the lugs. Jaquet Droz will make 28 pieces each of the meteorite version, priced at $126,000, and 28 pieces of the aventurine version, priced at $136,500. The diamond-set opal dial, priced at $262,500, is a one-of-a-kind piece. 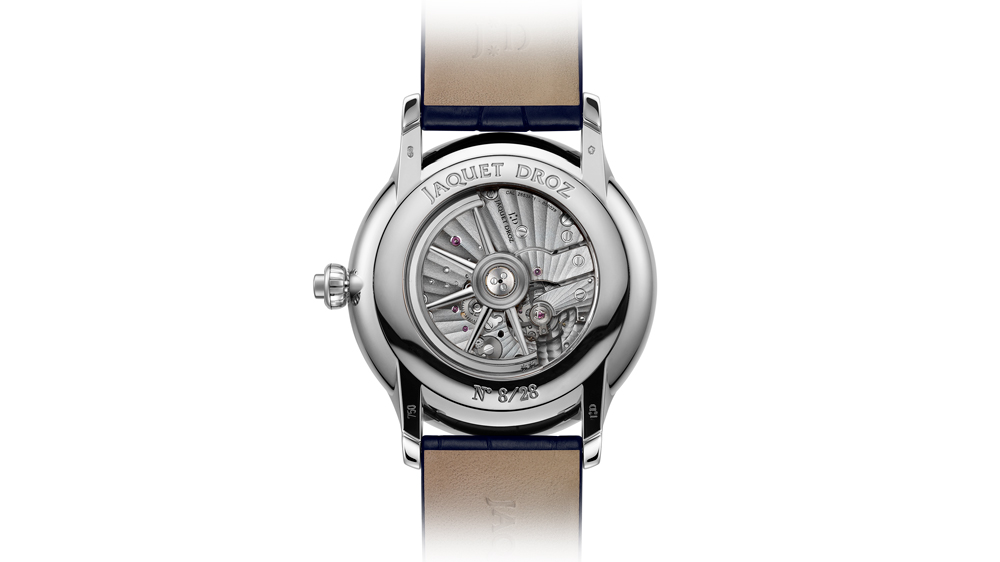 Turning the crown clockwise winds the watch, and turning it counterclockwise winds the automaton mechanism. The automatic movement JD2653 that drives the time has a 68-hour power reserve and is housed in an 18-karat gold case measuring 43 mm wide and 16.63 mm thick. The Loving Butterfly can be ordered through official dealers and select boutiques.