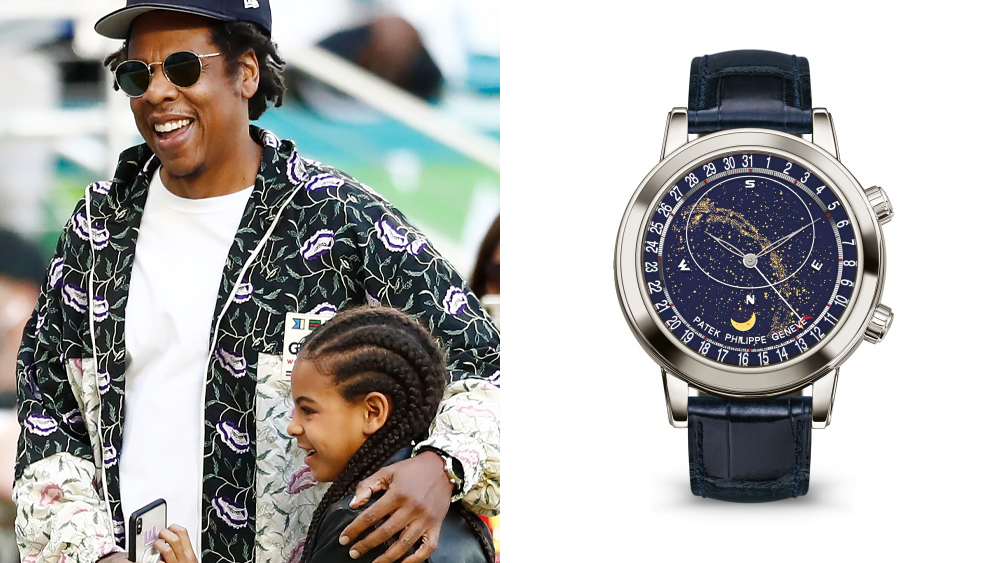 J-Lo may have stolen the show, but Jay-Z was was the picture of otherworldly cool at Super Bowl LIV—and he has Patek Philippe to thank.

The rapper-turned-business mogul donned a gorgeous platinum Patek Philippe Sky Moon Celestial Ref. 6102P timepiece for the NFL’s championship game at Miami’s Hard Rock Stadium on Sunday Night. The watch, which retails for $311,860, could be seen poking out the left sleeve of his Gucci windbreaker as he and daughter Blue Ivy toured the field prior to kickoff.

One of Robb Report’s most important Pateks of the 21st century, the Sky Moon Celestial has been turning heads in horological and fashion circles since it was first introduced in 2015. Drawing on the Swiss watchmaker’s long history of astronomical pocket watches, the timepiece’s exquisitely decorated blue sapphire-crystal dial features a rotating chart of the heavenly bodies, providing its wearer an exact image of the night sky in the northern hemisphere on any given day.

This isn’t the first time we’ve seen Jay-Z show off his Sky Moon Celestial. Back in 2017, at the Grammys, the rapper wore the timepiece to add some flair to his classy blue tux. That outfit was decidedly more formal than the casual ensemble the legendary emcee wore while watching the Kansas City Chiefs defeat the San Francisco 49ers 31-20 on Sunday night, but his ability to effortlessly pull off either look showcased his versatility—and the watch’s.

Of course, Jay-Z’s Patek wasn’t the only thing he did on Sunday that raised eyebrows. The rapper, who co-produced Jennifer Lopez and Shakira’s halftime show, and his wife, Beyoncé, also remained seated during the singing of the national anthem. The gesture, which has predictably angered some viewers and internet-lopers, is believed to have been inspired by ex-49ers quarterback Colin Kaepernick. The 32-year-old QB was all but pushed out of the NFL after he started kneeling during the national anthem before games during the 2016 season in order to draw attention to the issues of systemic racism and police brutality in America.