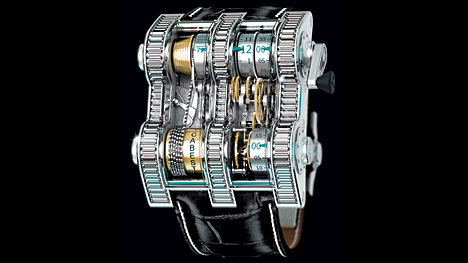 Horology stretches back five generations in Jean-François Ruchonnet’s family, but the young watchmaker approaches the trade from a thoroughly modern, technological angle. Computer-generated imagery, now the basic medium for watch design, was Ruchonnet’s original interest. He had a gift for engineering and computing, and his talent for the latter eventually led him to found DMC Group, a virtual imaging company. There in Geneva, Ruchonnet solidified his reputation as an innovative designer of avant-garde watches and the movements that drive them.

Ruchonnet comfortably remained at DMC until his passion for fast cars, sleek sailing yachts, and streamlined planes led him to conceive a trilogy of wristwatches, beginning with the auto-inspired TAG Heuer Monaco V4 in 2004, which featured a radical movement driven by belts and sliding weights. Four years later, TAG has still not managed to get the V4 concept watch into production, leading some to speculate that Ruchonnet is better suited to designing virtual watches, rather than practical timepieces. Such sentiment undoubtedly forced Ruchonnet to take the dramatic step of building his next watch himself.

The second model in Ruchonnet’s trilogy is the yachting-influenced Cabestan, the French term for capstan. While the movement’s vertical construction excited collectors when very realistic images of a prototype circulated a few years ago, watch brands were less enthusiastic about taking on the challenge of developing such a radical movement—nobody wanted another engineering headache potentially on their hands. Ruchonnet, who candidly describes himself as “unmanageable,” probably added to their hesitation. The designer is also impulsive and passionate about his work, so when his business partner Andreas Stricker suggested that they develop the Cabestan watch themselves—despite the huge challenges in moving a design into production—Ruchonnet agreed.

The movement design of the nautical-looking Cabestan Winch Tourbillon Vertical began with the idea of winding a winch, which necessitated the unusual vertical construction of the plates and bridges. From there, other yachting cues found their way into the mechanism. The watch’s minuscule chain and fusée recalls an actual winch, in addition to its practical function of providing the tourbillon escapement with constant force, even as the mainspring’s power declines. As a final touch, a small winch handle, normally tucked into the strap, both winds the movement and sets the time.

Although developing and manufacturing a reliable movement of this complexity would have proven an immense challenge for even an experienced manufacture, Ruchonnet, who initially collaborated with independent watchmaker Vianney Halter on an early prototype, downplays that outlook. “The thing most special about developing the Cabestan movement was not the technical difficulty,” he says. “It was the fact that it broke all of the rules. I am not scared to break the rules.”

The completion of the Cabestan Winch will inaugurate Ruchonnet’s own manufacturing and watchmaking atelier in the Vallée de Joux. His forthcoming projects include the Cabestan Plume, a technical pen with an expanding nib, and the third installment of his trilogy, the Cabestan Winglet, a watch that promises to adapt aspects of an aircraft cockpit to the wrist.