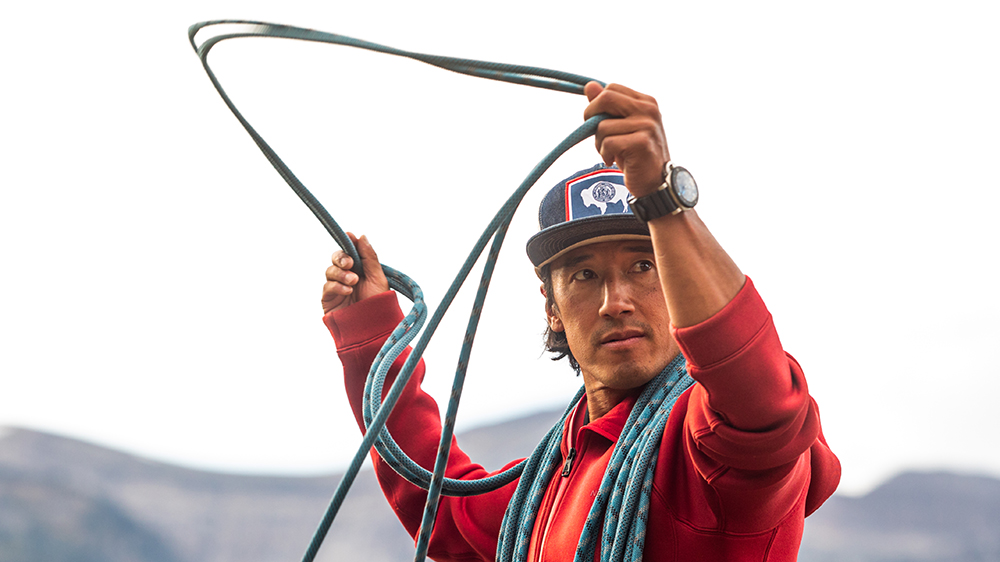 Jimmy Chin is at the peak of his career. The professional climber, photographer and filmmaker shared an Oscar this  year with his documentary filmmaker wife, Elizabeth Chai Vasarhelyi, for adrenaline-pumping Free Solo, the story of climber Alex Honnold’s life-threatening and nearly superhuman ascent to the top of Yosemite’s roughly 3,000-foot-tall El Capitan rock formation… without ropes. It’s a feat many have considered; only Honnold has attempted it. The incredible film, for those who haven’t seen it, is best watched with one hand over your eyes.

“It feels like you’ve entered the fourth dimension,” says Chin of his big win. “It felt like optimal experiences I’ve had climbing, skiing or surfing where your senses go into this other place. I just remember walking down the aisle at that moment, and I see it so vividly because it felt like time was in slow motion. I felt like I saw my whole life flash in front of me.”

The film has since taken home an astounding seven Emmy Awards, including a win for Chin and Vasarhelyi for Outstanding Directing for a Documentary/Nonfiction Program. Needless to say, brands are knocking down his door for partnerships, but his budding relationship with Panerai seems like a natural fit. A Panerai Luminor GMT 44 mm accompanied him to the Oscars, but the new Panerai Submersible BMG-Tech 47 mm is the only model tough enough to join him in the mountains. This month, Chin turned the lens on himself in a film with the Italian marque, where he punishes the watch on the cliffs of Grand Teton National Park.

Made from a proprietary Panerai material consisting of zirconium, copper, aluminum, titanium and nickel, BMG-Tech is heated at a high temperature and cooled for just a few seconds so that the atoms don’t form an ordered structure; the chaos of its makeup is what gives the case material a greater strength, as well as a resistance to corrosion, external shocks and magnetic fields. Its bezel is made of Carbotech—a material made from thin sheets of carbon fiber compressed under high pressure with a polymer called PEEK (Polyether Ether Ketone) for high durability. The result is a featherlight watch that can take a beating and emerge without a scratch.

It’s a design feature that is hugely important to climbers. “You become very selective about what you bring in the mountains,” says Chin, who adds that  he and his fellow climbers even cut the tags off their jackets to reduce weight. “Every ounce counts. You can shave  off five pounds by being conscious of your equipment, and that can mean the difference between being able to carry three days of food or six.”

But the function of time itself—hours, minutes and, more often, seconds—is paramount when you’re making a film where your subject, suspended only by his limbs, is constantly a millimeter slip away from death. In Chin and Honnold’s case, philosophically, it was also the right time to make Free Solo. “It had to be the right moment for him; he prepared for two years, but really he had been preparing his whole life,” says Chin. “Interestingly, it also had to be the right time for me. I needed all of my experience to have the confidence to make this film—any less and it would have broken me. The stakes were so high.”

Not only did they survive, but they achieved the summit. The resulting ascent to fame has been rapid. But Chin is already at work with Vasarhelyi on a feature documentary with Kristine Tompkins and Yvon Chouinard, whom he refers to as his mentors and “the greatest conservationists of our time.” Now Chin will make a film about preserving nature rather than conquering it. Tompkins and her husband, the late Douglas Tompkins, the multimillionaire founder of the North Face and cofounder of Esprit clothing companies, own large swaths of land in Patagonia. “[The Tompkins Conservation] just handed over 1 million acres—the biggest private land handover in history—to the Chilean government,” says Chin of the move that helped create five national parks and expand three others.

Meanwhile, he’s heading to the Maldives for surfing and diving then on to Antarctica in January, followed by the Sahara and the Chilean Andes. His Panerai BMG-Tech will be along for the ride, but will also, perhaps, be a reminder to slow down. “In the mountain, we have this saying, ‘Slow is fast’—if you scramble, you’ll make a mistake that might be highly consequential,” says Chin. “In the moment, you’re like, ‘OK, we have to make up this time.’ But you can’t be in a rush. It’s an interesting dilemma.”