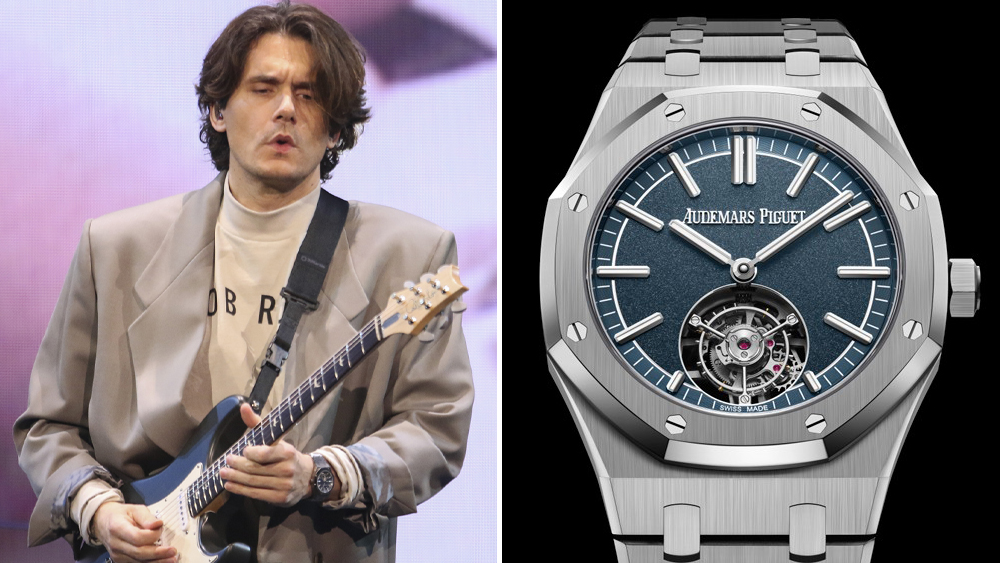 The American singer-songwriter recently performed a show in Atlanta as part of his SOB Rock Tour 2022 wearing a hot new take on the legendary Royal Oak timepiece.

In honor of the model’s 50th anniversary, the Swiss watchmaker released a slew of new Royal Oaks earlier this year. The Gérald Genta-designed watch, released in 1972, is without a doubt AP’s greatest hit, but the latest iterations have small design tweaks and ergonomic improvements that Mayer apparently appreciates.

The singer’s wrist candy appears to be one of the new 41 mm Royal Oak Selfwinding Flying tourbillons finished in titanium. (Audemars Piguet did not immediately respond to a Robb Report inquiry about Mayer’s model.) An elegant outlier, this reference eschews AP’s signature Grande Tapisserie dial with the famous square motif in favor of a sandblasted smoked blue face. It also features white gold hour markers, Royal Oak hands with luminescent coating and a white circle to highlight the minute track. Of course, the Audemars Piguet signature remains front and center.

The timepiece features the self-winding Caliber 2950 movement combining a flying tourbillon with a central rotor, which you can see through the dial side of the watch at 6 o’clock. Featuring a special Côtes de Genève finish, the movement is clearly visible through the caseback, along with a “50 Years” oscillating weight. Speaking of the caseback, it’s been slightly embedded in the case middle for a more comfortable fit. The thinner bracelet is also easier on the wrist, which is great if you’re a Grammy-winning guitarist.

The “Your Body is a Wonderland” singer is such an AP fan, in fact, he owns another Royal Oak tourbillon in pink gold, too, as reported by GQ. The “50th Anniversary” special edition is, of course, price upon request and likely out of reach for mere mortals. Audemars Piguet CEO François-Henri Bennahmias has said, however, that the brand plans to set aside a “big chunk” of Royal Oaks for newcomers who create a relationship with the brand.

“When you don’t know anyone you have to get known by our people and, eventually things happen,” Bennahmias said in January.