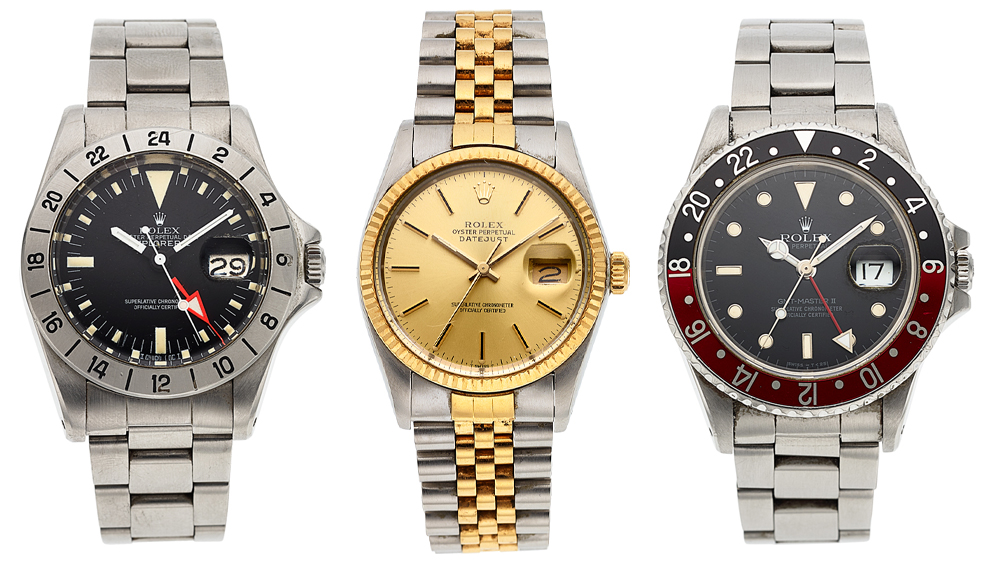 Julian Nott’s name might not ring any bells, but the British explorer and scientist was the preeminent adventurer in his field—ballooning. That may sound like an airy pursuit, but ballooning is a high-tech, high-stakes aviation sport: Nott once sailed 55,134 feet over Colorado, nearly twice the height of Mount Everest, which counts as one of his 79 world records set in the field. Or consider that Nott was the main consultant on Alan Eustace’s free fall from 135,890 feet in the stratosphere, in 2014, breaking Felix Baumgartner’s 2012 record.

“Julian was the main consultant for that free fall because Julian did the science on it back in the ’70s,” says Keith Davis, director of watches and fine timepieces at Heritage Auctions. The watches used by the Rolex-sponsored adventurer—which include an Explorer II Ref. 1655 and GMT-Master II Ref. 16760 “Fat Lady,” both of which accompanied Nott on two successful world-record attempts, as well as a Datejust presented to Nott at the Rolex Awards for Enterprise in 1984—will be available for final bidding on December 10 in New York City.

Each piece comes with an extraordinary amount of documentation. For the Explorer II and GMT-Master II, that includes not only papers from the watchmaker but also copious notes, journals, telegrams and letters regarding the expeditions themselves. Some of the standout documentation includes Nott’s firsthand account of his record-breaking 1974 ascent of 45,836 feet in a hot-air balloon over Bhopal, India, which accompanies the Explorer II; Nott’s personal notebook planning his expeditions—such as sponsorship targets that included Seagram’s, Triumph and Zales—with the GMT-Master II; and original ads promoting Nott and the watches.

While an everyday, two-tone ’80s Datejust is unlikely to be on any serious collector’s wish list, Nott’s comes with his name signed on the caseback and planning documents for his 1984 attempt for the first nonstop, around-the-world balloon flight—a feat so difficult it wouldn’t be achieved until 15 years later by Brian Jones and Bertrand Piccard aboard the Breitling Orbiter 3. The Datejust also comes with a 1982 letter from Nott asking Rolex to make an Explorer watch in titanium, to reduce weight for that 1984 voyage; to date, despite the popularity of the material, Rolex still does not make a titanium-cased watch.

Sadly, Nott’s watches are coming to auction after he passed away on March 26, 2019, due to a ground-based ballooning accident in Warner Springs, Calif., where he was testing high-altitude technology.

“I very much hope collectors will embrace and pass on Julian’s philosophy of life,” says Anne Luther, Nott’s wife. “His favorite quote by Charles Lindbergh was ‘Science, beauty, freedom, adventure—what more could you ask of life?’ Most importantly, he wanted to reinvigorate and rekindle an active spirit of adventure, not in a foolhardy way, but for young people to move away from their electronics and truly experience the thrill of adventure, both big and small.”