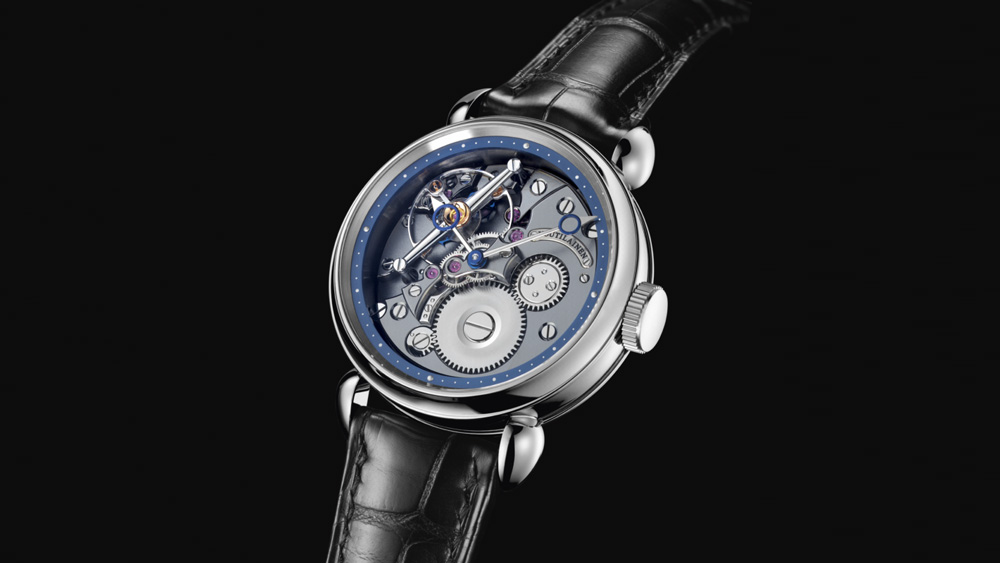 On the flip side. It’s a casual phrase that originated back when DJs actually played records. The flip side was the B side, the less popular side, the track you weren’t all that excited to hear.

But leave it to Finnish watchmaker Kari Voutilainen to flip the script on that paradigm. His new 28ti model—ti stands for titanium inverse—is powered by a new caliber that literally positions the movement inside out, with the escapement and a large, in-house balance wheel located front and center. In the case of the 28ti, which is based on Voutilainen’s signature Vingt-8 model—designed, built, fabricated, finished and assembled entirely at the Voutilainen workshop in Motiers, Switzerland—the flip side is the main event.

Unveiled at the Baselworld fair in March, the model—which comes in a limited series of 26 pieces, eight encased in titanium (CHF 86,000, approximately the same in dollars at current exchange), eight in platinum (CHF 98,000) and 10 in the rare-earth metal tantalum (CHF 118,000)—bears all the hallmarks of a Voutilainen special, i.e., hand-finishing details, such as a movement crafted from German silver, that make watch lovers feel faint.

Voutilainen brought the piece to the recent WatchTime LA event in downtown Los Angeles, and collectors couldn’t get enough.

“The 28ti was just mindblowing,” said Michael Haymond, a financial planner from Orange County who attended the event with fellow enthusiasts from the Chrono Group.

The watchmaker said he strove to give the piece a “very clean appearance” on both of its sides. The hour and minute display runs on the periphery of the openworked dial, while the back side houses a small seconds display and power reserve indicator (to show its 65 hours of run-time).

He said that of the three metals the model comes in, tantalum was by far the most difficult to work with, due to its hardness. He also said the model had sold out, so collectors keen to get their hands on one may want to consider secondary channels.