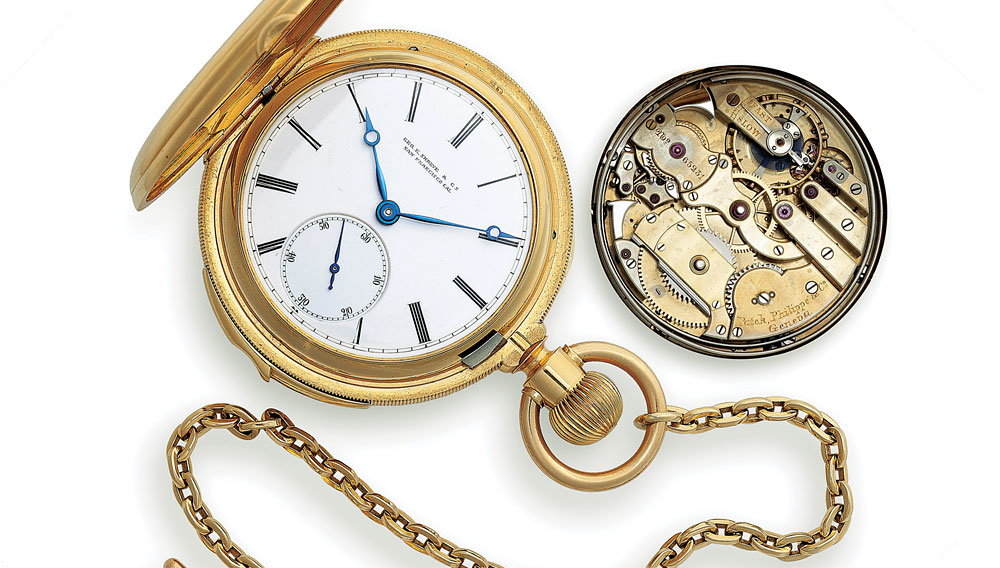 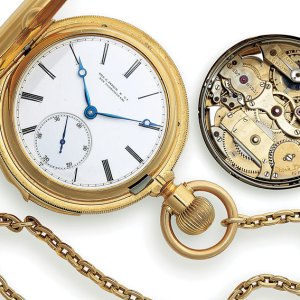 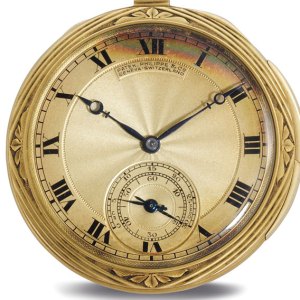 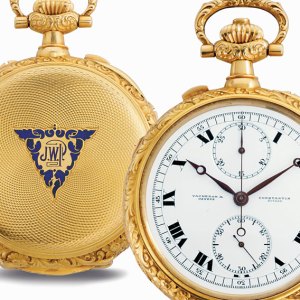 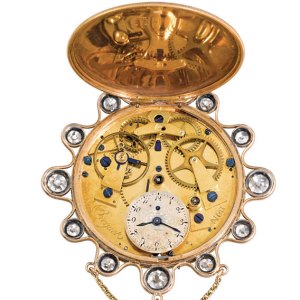 Much of America’s industrialization during the early 19th century can be credited to Oliver Evans, a Delaware-tborn inventor of the high-pressure steam engine, though it was a proclamation that he made at the turn of the century that branded him a visionary. “The time will come when people will travel in stages moved by steam engines from one city to another, almost as fast as birds can fly,” he declared. “A carriage will start from Washington in the morning; the passengers will breakfast at Baltimore, dine at Philadelphia, and sup in New York the same day.”

Almost three decades later, the Baltimore and Ohio Railroad was chartered, in 1827, making it the first westward-bound railroad in America. Additional rail lines soon were established in different parts of the country, and by 1862, tracks were laid to build the first transcontinental railroad. But if Evans is credited for the vision of such railroads, it is pocket-watch manufacturers, such as Waltham and Elgin, who were responsible for saving them, thanks to specifically designed railroad watches.

As Robert Cheney, the head of Skinner Auctioneers’ department of science, technology, and clocks explains, in the late 1860s, communities would calculate time based on the position of the sun, but because the sun’s path across the sky is different at different latitudes and longitudes, the time in each community was different. When the time in Boston differed from that in New York or Baltimore or Philadelphia, catastrophic railway collisions could—and sometimes did—occur. William Bond, the first director of the Harvard College Observatory in Cambridge, Mass., resolved the discrepancy by creating an astronomical regulator that established standard time, but it was up to the watch manufacturers of that era to create timepieces that could precisely keep it.

At that time, watch mechanisms were defined by brass wheels and axles, but once pivot areas started to wear due to constant motion, the precision of the timekeeping would suffer. To resolve this, watch manufacturers began incorporating as many as two dozen jewels—primarily rubies—in a watch’s mechanism, which provided a hard, polished surface impervious to erosion. And, as Cheney explains, these watches, built specifically for use by railroad companies, had to operate flawlessly, regardless of train vibrations, drastic changes in temperature, or constant jostling. “These are all things that can send a watch into a tailspin if they weren’t built to certain specifications,” he says. “It was a rigorous test that these watches had to go through to be designated a railroad watch.”

More than a century later, those pocket watches represent a niche that has remained strong with collectors; and with values ranging on average from $700 to $1,500, it’s a segment of the market that Cheney acknowledges can be a good entry point for a new collector. “It’s a very accessible area of collecting [pocket watches] that shows some sign of continuing on in the 21st century,” he says. “It’s the easiest category to learn and talk about.”

With the exception of such a specialized niche as railroad watches, Cheney sees dark times ahead for pocket-watch collecting, and as the reason he points to a changing of the guard in respect to the generations that are entering the market. “The baby boomer generation—the world’s leading collector generation—is getting old,” he says. “They’re tending to downsize, and the next generation has its own ideals as to what appeals to them. The next generation is more interested in style and fashion and wristwatches that complement their sports cars and boats. They’re more inclined to wear their wealth on their wrist. It’s a whole new direction to this field, and not that it’s here yet, but it’s on its way.”

It’s a somber picture to paint of the pocket watch’s fate as a collectible, but it’s not a view shared by all experts in the field. In fact, many, including Sam Hines, head of the watches and wristwatches department at Christie’s New York, have seen a market that has grown more robust in recent years. Hines points to a period about three years ago as the moment when pocket watches began to attract more attention on the collector scene and also increase in value. As Hines explains, it was the convergence of many factors that contributed to such a shift.

For starters, the stock market took an enormous hit, and as was the case with other collectible items, timepieces grew more appealing. “It became a safer bet to put your money into something that was going to go up in value rather than stocks or complex financial systems,” Hines says.

In the luxury timepiece world specifically, modern manufacturing methods had evolved to the point that suddenly, new manufacturers were flooding the market, promoting new-age construction techniques, and presenting the consumer with a bevy of new styles and brands from which to choose. To compete, the established watchmakers highlighted the one element that distinguished themselves from all the upstarts: their history. “Patek [Philippe] is very much about tradition and they’ve always been the best at promoting their heritage,” Hines says. “So in 2008, Patek had a grand exhibition and invited all modern wristwatch collectors to dinners to show them their new watches, but they also created a museum with 200 pocket watches to show them their heritage and history.”

Hines believes that’s what turned a lot of modern wristwatch collectors on to vintage pocket watches, and when those same collectors surveyed the auction market and found that they could buy a pristine Patek Philippe pocket watch with an original certificate for $5,000, they saw a lucrative investment opportunity. Hines believes the prospect of higher prices is still there, and he points to the Asian market as proof.

Before highly complicated timepieces changed the landscape of watchmaking, the earlier part of the 19th century was dominated by European craftsmen who created highly decorative pocket watches. In fact, some British and Swiss makers created watches tailored specifically to the Chinese aristocracy, and they traveled to Macau to market them to Asian dignitaries. One such firm, Piguet & Meylan, a Swiss company founded by Isaac-Daniel Piguet and Philippe-Samuel Meylan, established itself as the front-runner, and today its watches are considered to be the finest that were made for such an audience.

According to Hines and others, vintage enameled watches from that time period are commanding staggering prices at Asian auctions, as evidenced by a pair of rare Piguet & Meylan gold, enamel, and seed pearl–set pocket watches that sold for more than $375,000 in 2008—more than $115,000 above their highest estimate.

But Asian collectors also are attracted to the highly complicated pocket watches made by respected brands during the late 19th and early 20th centuries, and Hines says that market is growing stronger in the Western Hemisphere as well. “A [vintage] Patek minute-repeating, perpetual calendar, grand complication pocket watch today is still undervalued compared to modern wristwatches,” he says, “so I think there’s still a lot of growth potential in pocket watches.”

Jim Wolf, the director of watches and fine timepieces at Heritage Auctions, shares that sentiment and goes on to say that it’s the inner workings of a pocket watch that are of the most importance to serious collectors. “Whether it’s a 24-jewel railroad watch or a supercomplicated European watch, the collector is looking for the same thing: it’s the mechanism itself and what’s inside,” he explains. “That’s the intrinsic value, rather than just being the gold or enameled case or the housing that holds it.”

According to Wolf, a complicated timepiece by a celebrated manufacturer like Patek Philippe, for example, can contain 800 working parts. By that token, a collector with an affinity for the inner workings of a timepiece will find that a pocket watch, due to its size, provides a better glimpse into that world. “The mechanisms are easier to view and appreciate because they’re larger,” he says. “So from a precision engineering standpoint, it’s easier for those [pocket-watch] collectors to appreciate.”

Though collectors across many disciplines often will analyze years upon years of auction results to chart a specific item’s appreciation or depreciation in value, Wolf urges the pocket-watch collector to abstain from such a strategy, since limited resources have made certain factors more prevalent today than they were even a few short years ago. “Condition has become a much more important factor when it comes to the price that the pocket watch is going to bring,” he says. “In the earlier years there was more available on the market, but today, it’s harder to find things in wonderful condition that aren’t already a part of a collection.”

When it comes to those collections, there are many niches on which an enthusiast could choose to focus. Some collectors choose the enameled or highly complicated watches mentioned earlier, while others gravitate toward decorative or engraved watches. In those cases, as Snellenburg explains, there are even more subcategories to consider. “Originally, watch case decoration was allegorical,” he says. “It was decorated with a scene that told you how to spend your time wisely. Time is [seen as] a river, so when you open up a lot of early Swiss watches, there’s a scene of a river. There were skull cases that reminded you that life is short, and there were watches that depicted lovers because you were getting married and they were showing you the life that was in front of you.”

Such is the personal nature of collecting pocket watches, where after more than 300 years of watchmaking, the only thing standard is the time.