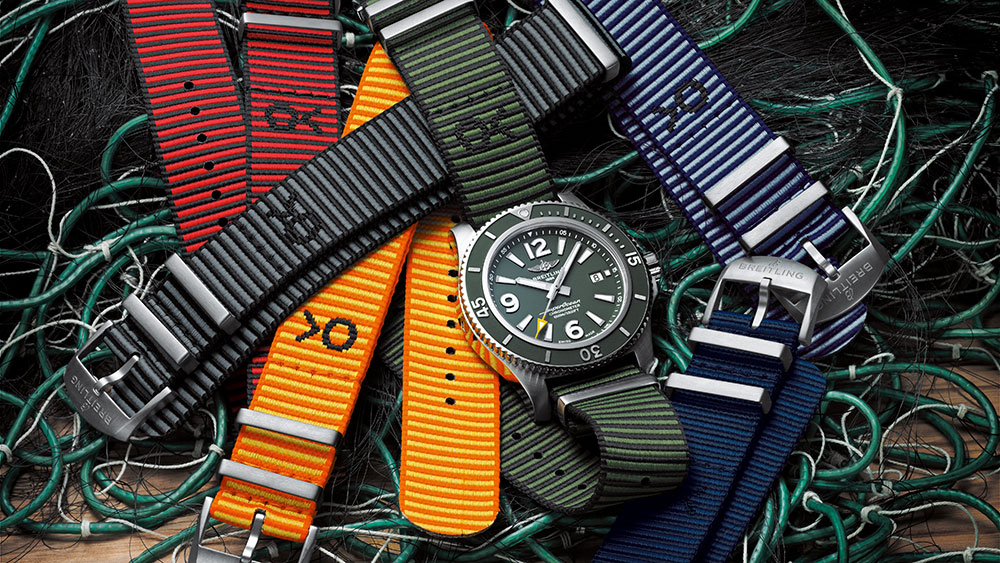 Breitling unveiled a new Superocean Automatic 44 Outerknown dive watch last week in its natural habitat. The watch was tested at the Wave Company Surf Ranch owned by surf champ Kelly Slater, a member of Breitling’s “surfer squad” of ambassadors. The ranch, located near Lemoor, California, just south of Fresno, offers perfect surfing conditions…100 miles inland. Surfers can ride in a long trench-like pool of water with machine-made waves on tracks that resembles a train with a huge snowplow attached to the front. It moves through the water and creates the most powerful man-made wave in the world, reaching speeds of 20 mph. Needless to say, the stainless steel watch, which is water-resistant to 1,000 meters, passed the test.

Outerknown is surfer slang for the other, unseen side of a wave. It is also the name a company owned by Slater that makes sustainable clothing—over 90 percent of Outerknown’s products are made from organic, recycled or regenerated materials. In the spirit of eco-consciousness, Breitling also introduced a line of NATO-style straps for the Superocean (or any other Breitling model) made of Econyl, a recycled material made from discarded fishing nets and other repurposed nylons. Fashion labels Burberry and Prada have also used Econyl fibers in their collections.

“The Superocean Outerknown is a fantastic watch, but the enduring story is the innovative strap collection,” says Breitling CEO Georges Kern. “It marks another important step in our shared focus with Kelly Slater on sustainability.” There are 18 references in the collection in 6 colors and 4 sizes. The Superocean Outerknown watch is 44 mm with a wide unidirectional bezel and a green dial with outsized numerals and indexes coated in Super-LumiNova. It comes on a forest green Econyl Outerknown strap with a total of six different interchangeable colors. The movement, Breitling automatic caliber 17, is COSC-certified with a 38-hour power reserve.

The launch at Slater’s ranch was part of the latest Breitling Summit, which also saw the unveiling of the new Aviator 8 Mosquito Night Flight, created to commemorate De Havilland’s historic WWII-era plane. It’s part of Breitling’s ongoing celebration of its aviator watch heritage, which kicked off earlier this year with the Aviator 8 Curtiss Warhawk collection, a tribute to the famed P-40 Warhawk fighter plane. The Aviator 8 Mosquito was an ultra-light plane made out of a wood laminate, designed to be a light bomber and reconnaissance aircraft during World War II. It was one of the fastest planes in the world – it flew 20 mph faster than the famous Spitfire, which was equipped with the same engine.

“Military historians point out that while the Spitfire won the Battle of Britain, the Mosquito won the war,” says Alistair Hodgson, the curator of the De Havilland Aircraft Museum in England, who was on hand at the summit. The design of the Mosquito, he said, was so top-secret that de Havilland didn’t want to build it at its headquarters near London, and instead rented a 16th-century manor house in Salisbury, moved the entire design team there and built it in total secrecy. “When it was finished, they took it apart piece by piece and transported it by truck back to London.” The Aviator 8 Mosquito Night Flight contains Breitling’s elite automatic Caliber 01 chronograph, with a 70-hour power reserve. The watch is a COSC-certified chronometer and water-resistant to 100 meters. The design is based on the onboard clocks designed by Breitling’s Huit Aviation Department in the 1930s and 1940s, and the red and orange accents on the dial recall the roundels and markings on the fuselage of the De Havilland Mosquito.

The third debut at the Summit was a revamped Avenger collection, Breitling’s entry level line of pilot’s watches. The new collection incorporates elements of the now-discontinued Colt line, and, in keeping with CEO Georges Kern’s aim to refine Breitling’s product line, was pared down from 41 references to 14. Yet the line remains surprisingly broad: There are three sizes—43, 45 and 48 mm—with GMT, chronograph and automatic 3-hand options and a broad selection of dial colors and straps. The bezel of the new Avenger was redesigned, along with a few other tweaks, including color highlights, but most other design elements remain the same, including the distinctive font and the signature rider tabs at the cardinal points on the bezel. The Arabic numerals recall the stenciled numbers on the decks of aircraft carriers.

To market the collection, Breitling assembled an Aviation Pioneers Squad as part of its #squadonamission campaign, including: astronaut Scott Kelly; Rocío González Torres, a commandant in the Spanish Air force and the first Spanish woman to log 1,000 hours at the controls of an F-18 fighter jet; and 18-year-old Luke Bannister, a world champion drone pilot.