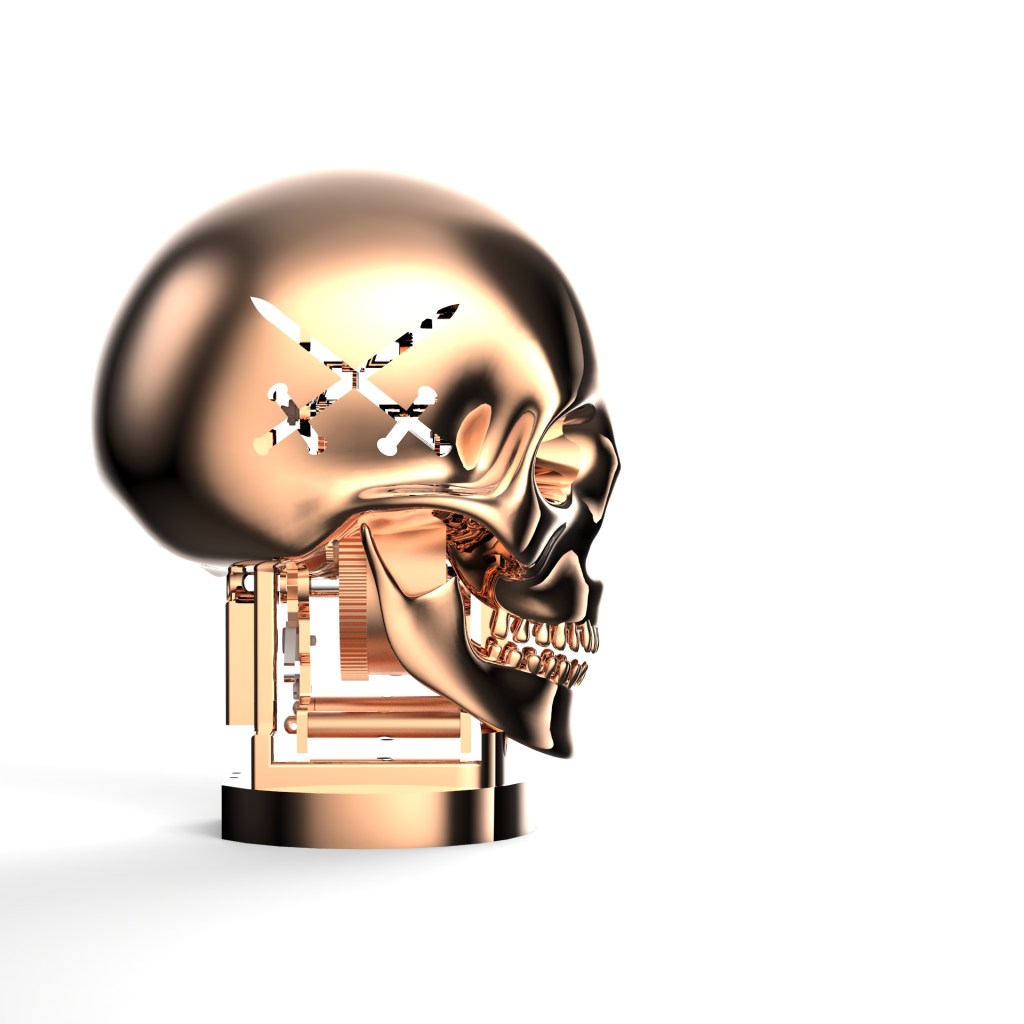 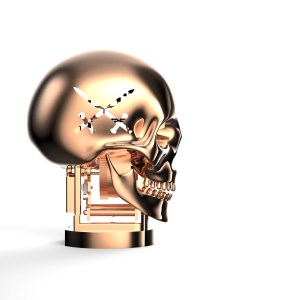 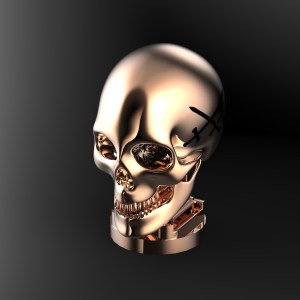 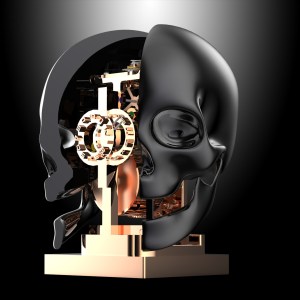 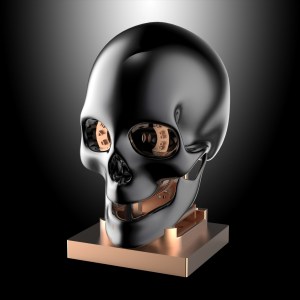 Celebrate life with a kinetic sculpture that tells the time

For this new edition of Baselworld, L’Epée 1839 unveils Requiem: a table clock with an 8-day movement designed in partnership with Kostas Metaxas. This limited edition takes its inspiration from the shape of a human skull and displays the time in the sockets of the eye.

Requiem is a table clock designed and manufactured by L’Epée 1839, Swiss specialist of high-end kinetic clocks. It measures nearly 19 centimeters (7.4 inches) high and weighs about 2 kilograms (6 pounds). It is made of cast aluminum which is then perfectly finished off in the Swiss workshops of L’Epée 1839. Two skull finishings are available: a black skull associated with a movement in gold-plated brass, or a silver color version: aluminum skull and palladium-plated movement. The new movement is an internally designed 1853 HMD caliber with an 8-day power reserve.This new movement features two discs that displaya “slow” jumping hour and sweeping minutes.

Opting for a timeless artistic genre: Memento Mori, L’Epée 1839 and the designer take on a graphic and technical challenge. Memento Mori, literally translated as “Remember that you are going to die”, reminds Man of the humility he must show in the face of eternity.

Kostas Metaxas has chosen to place a horological mechanism deep in the center of the skull, representative of a brain which is master of its destiny but encapsulated. Symbols of intimate ties uniting life and time.The eyes, on the other hand, are spectators of time passing and quite naturally the hour invites itself in the eye sockets. The reading of the hours and minutes is achieved by two transparent discs placed respectively in the right eye and the left eye. So you must face your fears and look at Requiem in the eyes … to know…. the time.

The protective housing formed by the skull around the movement allows only a few reflections of light to filter through openings: two crossed swords, symbol of the brand, placed on the temples, such as openings on another temporal space, suggest the rhythmic oscillations of the escapement.

Requiem is a limited edition of 50 pieces per configuration: black skull and golden movement, or aluminum skull and palladium movement (silver color).

Composed of 160 pieces entirely designed, finished and assembled in the workshops of L’Epée 1839 (except the 24 rubies), the movement is available in two finishings: gold or palladium.

The hour and minutes are displayed inside the eyes, thanks to a system of discs on which the time indications are stamped. L’Epée 1839 adds a whole new complication to its 8-day movement: the disc mechanism displays a “slow” jumping hour and sweeping minutes respectively.

In the presence of a conventional jumping hour indication, it is difficult to know whether the jump has already taken place or not. It is therefore possible to misread the time. In order to avoid this, L’Epée 1839 developed a “slow” jumping hour.As a result of this complication, the hour disk remains stationary during the first 55 minutes of an hour; Then, rather than jumping instantly, it starts to slowly turn five minutes before the new hour. This gradual jump is more easily noticed and the reading of the time is made easier.

With an8-day power reserve, Requiem has to be rewound each week, so offering an intimate moment with its symbolic, thanks to a key specifically placed at the base of the skull, as to represent an essential axis in the human being. From the nape of the neck or more precisely from the cervical plexus in Humans, all information, wills and decisions will be sent to the organs and members. Here, it is the energy necessary for the proper functioning of the table clock which is transmitted through this gesture. The unique key also allows you to set the time.

Far from the traditional clock, these 2 kilograms of skull can disturb even in all of its sobriety. Two swords were engraved on the sides of the aluminum skull to let in the light and give reflections to the movement. The jaw designed to be very realistic is composed of 24 independent teeth.

Each story, each life, each skeleton is unique, bearing the stigmata of time. To make the timepiece even more realistic, L’Epée 1839 has deliberately left small defects, specifically, individually and harmoniously located on each skull, as a sign of life, leaving you to imagine a story and making each timepiece totally unique.

The skull rests on two pillars, recalling the two trapezius muscles, in the middle of which the key is positioned. The aluminum base ensures the stability of the clock.

Requiem is available in two versions:

The hour and minutes are displayed in the eyes of the skull with two stamped discs.

L’Epée 1839 movement developed and manufactured in our own workshops

Manual winding of movement actuated by a specially designed key

An aluminum column system connects the skull to the base on which the movement is fixed.

The unique key for Requiem’s time setting and manual rewinding interlocks directly between the columns.

Kostas Metaxas is a magazine editor, film producer, art and technology enthusiast. He feeds on different sources, and hisvarious and different activities complement each other to enrich his creative work.His artistic journeyis unconventional: from art to design, but for him, it was the obvious step. It is with a wise and multicultural artist’s eye that he approaches this new conception. His creations are unique and he has been awarded many times for his talents as a designer.

Australian of Greek parents, Kostas Metaxas travels the world from Darwin to London, from the Greek islands to Germany. It was during his travels that he found the inspiration of Requiem, resulting from his limitless imagination and his love for music. Self-taught, he likes to understand and discover newmaterials when he conceptualizes objects. In collaboration with L’Epée 1839research and development team, he applies contemporary technologies, and exploits metals to innovate and create.

When asked why so much sobriety in the exterior design, he replies: “This is part of the fascination that I feel with respect to “watch complications”. Thus the ideas of limited terrestrial time and complex mechanical watchmaking envelope can be seen as a metaphor or allegory of life itself (and of all its complications …).

Kostas Metaxas simply succeeded, by drawing this skull, to summarize the famous equation of life. Although not everything is equation, Google will certainly have any kind of answer to offer on this subject, but on principle we all agree that the equation of life is a fragile balance between time and happiness lived from birth to death. Hence, the symbolic human skull, illustrating the passing of time, takes on its full meaning, especially when light comes to rest on the movement through the few openings, and so reflects, for a moment, touches of gold and silver within a gloomy universe.

For over 175 years, L’Epée has been at the forefront of watch and clock making. Today, it is the only specialized manufacture in Switzerland dedicated to making high-end clocks. L’Epée was founded in 1839, initially to make music box and watch components, by Auguste L’Epée who set up the business near Besançon, France. The L’Epée hallmark was that all parts were made entirely by hand.

From 1850 onwards, the manufacture became a leading light in the production of ‘platform’ escapements, creating regulators especially for alarm clocks, table clocks and musical watches. By 1877, it was making 24,000 platform escapements annually. The manufacture became a well-known specialist owning a large number of patents on special escapements such as anti-knocking, auto-starting and constant-force escapements and the chief supplier of escapements to several celebrated watchmakers of the day. L’Epée has won a number of gold awards at International Exhibitions.

During the 20th century, L’Epée owed much of its reputation to its superlative carriage clocks and, for many, L’Epée was the clock of the influential and powerful; it was also the gift of choice by French government officials to elite guests. In 1976 when the Concorde supersonic aircraft entered commercial service, L’Epée wall clocks were chosen to furnish the cabins, providing passengers with visual feedback of the time. In 1994, L’Epée showed its thirst for a challenge when it built the world’s biggest clock with compensated pendulum, the Giant Regulator. At 2.2m high, it weighs 1.2 tons – the mechanical movement alone weighs 120kg – and required 2,800 man-hours of work.