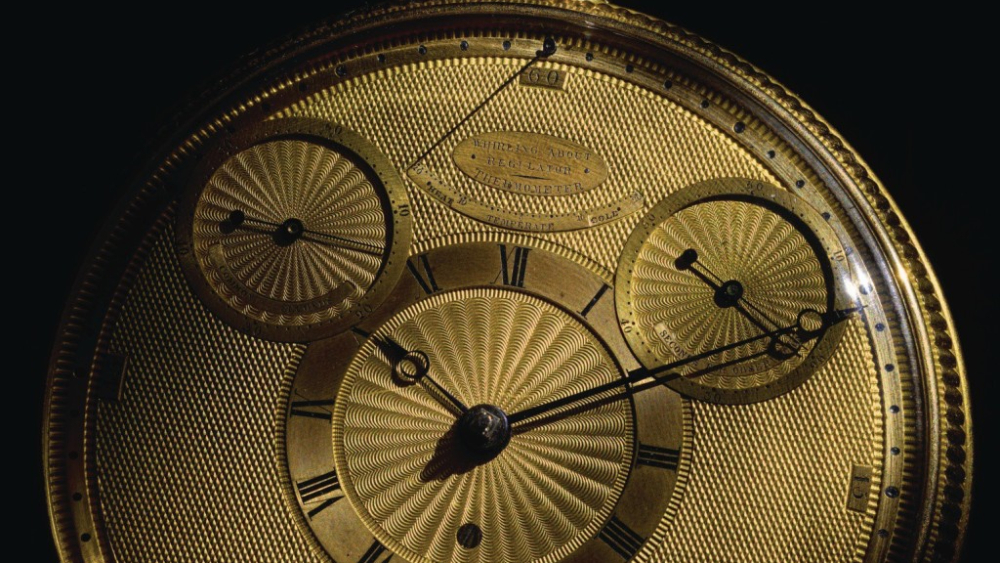 Sotheby’s forthcoming auction of rare collectibles includes a timepiece fit for royalty and a price tag to match.

Originally purchased by England’s King George III in 1808, the gold four-minute tourbillon pocket watch in question was crafted by none other than Abraham-Louis Breguet whose eponymous firm still exists today. Representing just one lot from The Collection of a Connoisseur, the glistening model is expected to fetch as much as $1 million when the final hammer falls.

When it was originally created, this tourbillon was a groundbreaking piece of horology and has survived the centuries in what Sotheby’s is calling “original condition.” It does not bear the Breguet insignia on the exterior,  most likely because it would have caused a scandal for an English monarch to own such an expensive French watch. However, the tourbillon resting inside the cage is marked with the horologist’s name.

Though its royal provenance undoubtedly adds to this piece’s importance, that’s not the only feature that makes it significant. It is believed that Breguet, the man, invented the tourbillon in 1793 while living in exile in Switzerland to escape the Reign of Terror that engulfed France after its Revolution.

Breguet lacked his normal tools but used his inventiveness to create some of watchmaking’s most important developments, the perpetual calendar, ruby cylinder, sympathique clocks and constant force escapements, in addition to the tourbillon. He returned to Paris in 1795 and his patent application for the tourbillon was filed in 1801. The example included in this upcoming auction hails from a period when Breguet had refined considerably his initial design with better movement detail and a larger yet slimmer profile.

Documentation unique to the lot strongly suggests that this specific watch may have been the first sold. Breguet archive notes document it being sent to England on behalf of the king on June 29, 1808. Other than making an appearance in the Five Centuries of British Timekeeping Exhibition in London in 1955, the timepiece hasn’t been seen publicly since the last time it was at auction in 1999, when it sold for $687,028.

The Collection of a Connoisseur opens for bidding at Sotheby’s on July 14th.