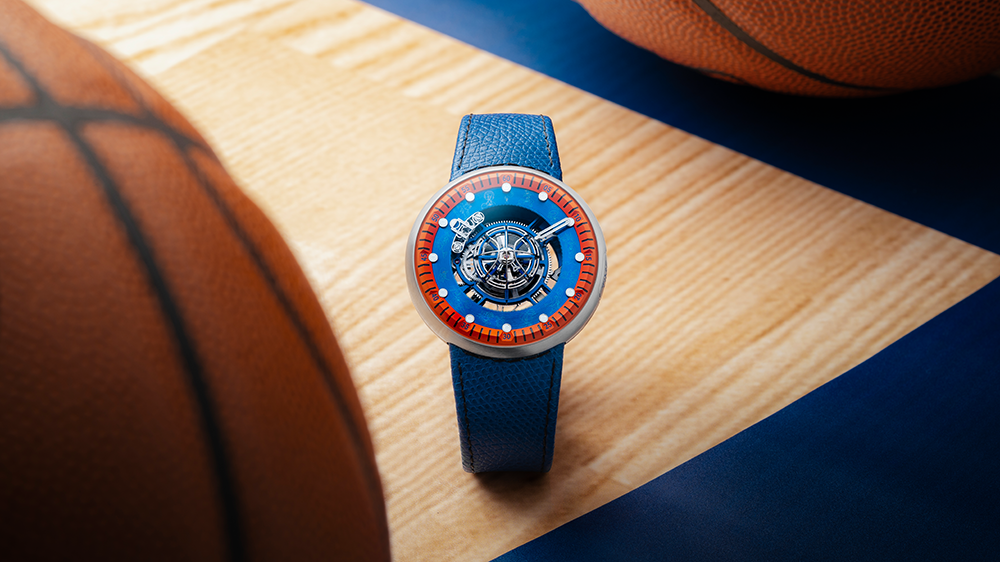 In the lead-up to the premiere of Space Jam: A New Legacy, Kross Studio has unveiled a slam dunk of a timepiece honoring the new movie.

The Swiss outfit, known for its feats of haute horology, has designed a high-complication tourbillon that nods to both the playful nostalgia of the Looney Tunes and the world of basketball while showcasing true technical prowess.

The limited-edition wristwatch features a 45mm titanium case with a sapphire crystal dome that houses a spate of Space Jam motifs and complex mechanics. In fact, the unique timepiece comprises a total of 281 hand-made components, which is enough to make Wile E. Coyote’s head spin.

The tourbillon’s dial is engraved with all your favorite Looney Tunes characters.  Alex Teuscher/Kross Studio

The centerpiece is the skeletonized tourbillon cage that mirrors a basketball and highlights the regulator beneath. This is offset by a blue fixed hour wheel that is emblazoned with the “dream team”—that is, the full cast of Loony Tunes characters, from Bugs Bunny to Marvin the Martian. The hands, meanwhile, have been affixed to a peripheral display mechanism that orbits a full 360 degrees around the tourbillon.

Made in-house, the 3Hz manually wound KS 7000 caliber movement offers a five-day power reserve using a single oversized mainspring barrel. The movement is best viewed via the window on the back of the timepiece. Here, the watch-winding and time-setting can be carried out thanks to a push-button and the D-ring crown.

The watch can be fitted with two different straps, including a deep blue calfskin leather option and an orange rubber design that mimics the color and texture of a basketball. The interchangeable strap system makes switching between the two both quick and easy.

To top it off, the Space Jam tourbillon is housed in a presentation box that doubles as a kinetic sculpture of a basketball. Forged from aluminum and oak, the b-ball actually unlocks with a simple twist to reveal a special spot to store the timepiece. It sits on a pedestal that is adorned with the Looney Tunes squad.

Just like its predecessor, the Space Jam collector set will set you back a pretty penny. Limited to 10, it’s priced at $100,000. And that’s all folks.