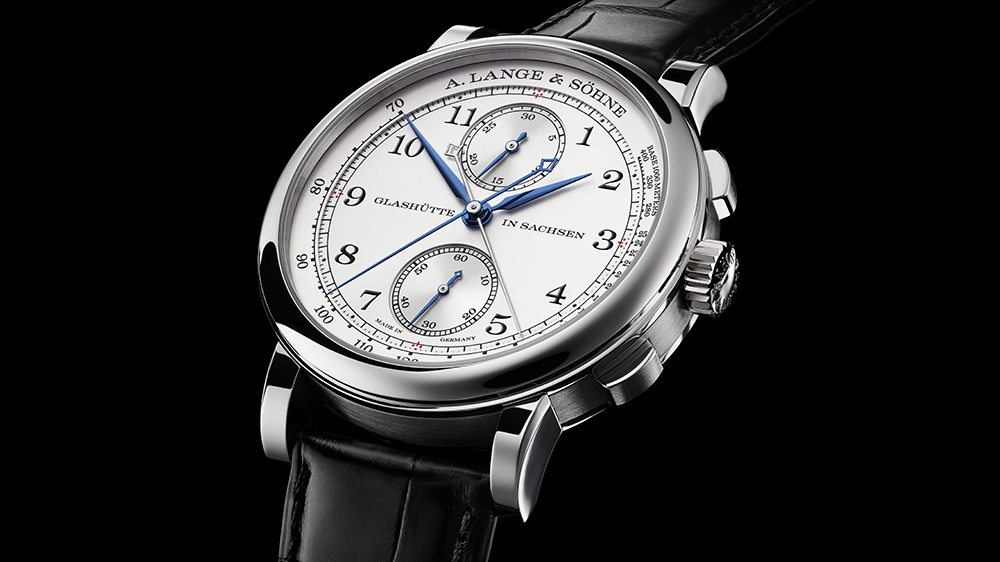 A. Lange & Söhne has a midsummer treat for collectors of its beautifully executed complications: a 200-piece platinum version of its 1815 Rattrapante, with that most beautiful of movements, a manual-wound chronograph.

The 1815 Rattrapante was first launched in Honey Gold, the brand’s proprietary pale yellow gold, in 2020, in a limited edition of 100 pieces—so very few had the opportunity to see it in the metal. The price for the platinum version is officially “on request” but it is likely to exceed the launch price of $134,000 for the Honey Gold version—but then, the number of people wanting to get their hands on one of them will likewise exceed the number being produced. Lange only makes about 5,000 watches a year, so when it does a limited edition, it is limited.

The platinum case is 41.2mm x 12.6mm, which is slim, considering the technical complexity of its 365-part manually wound movement.

The caliber L101.2, with a double column-wheel chronograph construction, has a 58-hour power reserve. Like all Lange movements, it is meticulously decorated and that is proudly displayed through the caseback. You can see the hand-engraved Glashütte stripes on the bridges, which are made of untreated German silver, along with the signature hand-engraved scrolling on the balance cock. An additional chronograph bridge is decorated with a similar floral engraving pattern. All upper sides of the moving parts of the rattrapante chronograph mechanism, including levers, springs and jumpers, are decorated with straight graining while the peripheral chamfers are all polished.

The platinum 1815 Rattrapante has a white dial—or argenté, as Lange calls it—compared to the Honey Gold’s black dial with gold markings. The platinum piece seems more purely traditional, especially with the blued hands and railway-track minute scale, reminiscent of historic Lange pocket watches. The arrangement of the subdials is unique. Rather than the conventional 3- and 9-o’clock positions, the 30-minute counter and sub-seconds are at 12 and 6, respectively. The words “Glashütte in Sachsen” across the dial is a reference to 19th-century Lange pocket watches. Limited to 200 pieces. Price on request.