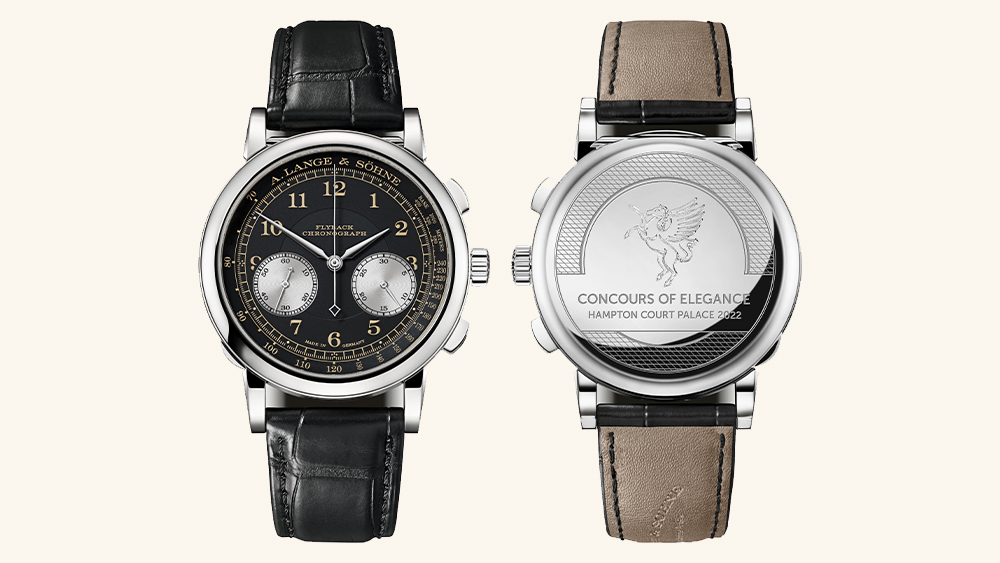 A. Lange & Söhne is revving its engines this fall.

The elite German watchmaker’s chronograph collection will be displaying its charms amidst a collection of 60 classic rare automobiles at Concours of Elegance from September 2 to 4. The event takes place in the gardens of Hampton Court Palace, located within a loop of the River Thames on the outskirts of London. The palace was once the home of Henry VIII (it is said to be haunted by his wives) and descendants of the former monarch’s deer herd still roam the grounds. The legendary gardens are home to the world’s oldest hedge maze—an intricate labyrinth bordered by 500-year-old yew hedges—and the great grapevine, a 250-year-old creeper said to be the oldest and largest in the world.

Amid this scenic display of bygone wealth, a slew of modern high-end toys including Ferraris, Bugattis and Aston Martins will be on display, as well as a special one-of-a-kind Hampton Court Edition of A. Lange & Söhne’s 1815 Chronograph. The watch is set to be sold to the highest bidder on November 6th at the Geneva Watch Auction XVI by Phillips in Association with Bacs & Russo, with proceeds benefiting The Prince’s Trust. The charity, set up by Prince Charles in 1976, supports young people aged 11 to 30, helping them to develop life skills and to access job opportunities. More than a million young people across the U.K. have been supported through courses offered by the organization.

The unique version of Lange’s fan-favorite, hand-wound flyback chronograph has a hinged cuvette, a cover over the caseback that is hand-engraved with the Concours of Elegance logo on the outside and the words “Unique piece” on the inside. The motif took several days to complete, using the intaglio technique, according to Lange. The 39.5 mm case and the cuvette are dressed in 18-karat white gold, while the black dial comes accented with sandstone-colored numerals and silver subdials—a unique combination for the model. The gold hours and minute hands match the rhodiumed steel chrono seconds, subsidiary seconds and minute counter. The Arabic numerals, railway-track minute scale and slightly lower-than-center subsidiary dials are inspired by A. Lange & Söhne’s historic pocket watches. Representing the historic connection between motorsport and time measurement, a tachymeter scale is featured on the periphery. The movement, likewise, is equipped for timing races. Its manual-wound caliber L.951.5, with a 60-hour power reserve, large balance and a slow frequency of 18,000 vph (2.5 Hz), allows the watch to display stopped times to an accuracy of one-fifth of a second. Under the cuvette, you can see the meticulous decoration with floral engraved balance cock, a Lange signature. It comes on a hand-stitched black alligator strap.

Lange & Söhne has been a partner of the Concours of Elegance since 2018, where it showcases watches that reflect the historic relationship between motorsport and time measurement. “The focus is on automobiles, on motion,” says Lange CEO Wilhelm Schmid. “In keeping with our motto to never stand still, we want to move things this year in social terms, too. The Prince’s Trust enables children and adolescents to recognize and meaningfully use their potential. We not only support this goal, but we also share it: For 25 years now, as a training company, we have been experiencing that the promotion of younger generations significantly contributes to the success of our manufacture.”