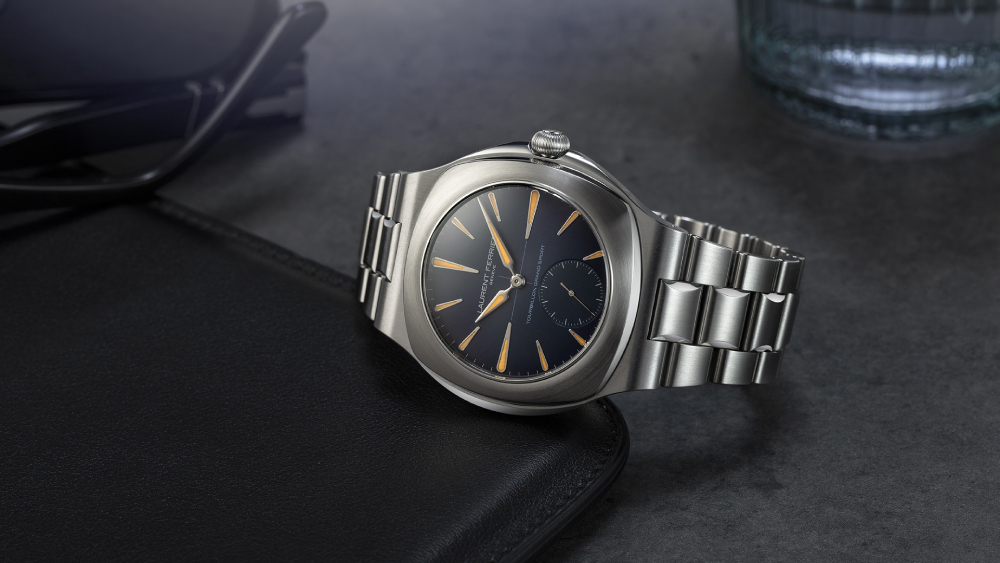 Striking the right balance between elegance and function in a sports watch is no easy task. But Laurent Ferrier may have just struck gold––or at least steel––with its latest timepiece, the first in the brand’s history with an integrated steel bracelet.

Named the Grand Sport Tourbillon, the watch looks markedly different from many of the styles produced by the Swiss firm but stays true to its sense of history and craft. The design takes cues from Laurent Ferrier’s founder, who spent much of his time during the 1970s behind the wheel of a racecar even going so far as to compete in the famous 24 Hours of Le Mans seven times. It’s this commitment to sport that led to the new, limited-edition watch.

Housed in a contemporary 44mm stainless steel case, it has a predominantly circular silhouette and overall rounded edges made softer by a matte finish. The bezel is cushion-shaped but has contrasting mirror-polished flanks while the middle of the case has a barrel-shaped outline. And, of course, it features the house’s first integrated steel bracelet. The central row of the three-row link construction is satin-finished with mirror-polished edges for subtle flash.

A view of the clear case back.  Courtesy of Laurent Ferrier

An opaline dial begins as blue at the center but slowly bleeds into black toward the edges, all the better to contrast with the orange SuperLumiNova hands and indexes. It all remains visible beneath gently arcing tinted sapphire crystal, which creates a slightly convex silhouette when viewed from the side.

The tourbillon, perhaps the star of the show, is only seen via the sapphire case back, which is fixed to the body with bolts resembling those used in motorsports. As proof of the company’s dedication to craft, the tourbillon bridge is also carefully hand-decorated. The movement features a long blade-type ratchet pawl system that clicks as it’s being manually wound. And for the adventurous user, it has 80 hours of power reserve and is water-resistant up to 100 meters.

Learn more about the Grand Sport Tourbillon on the brand’s website.