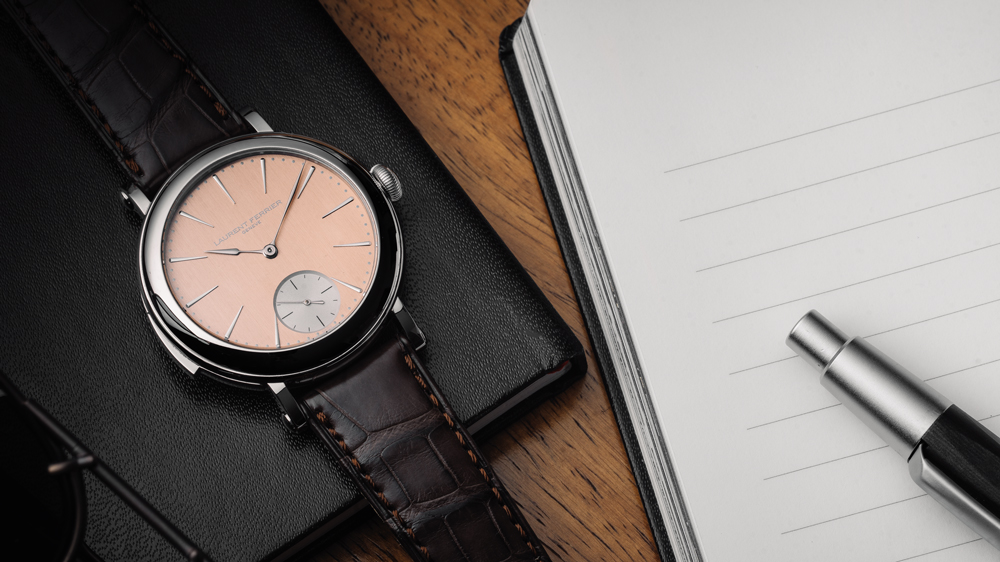 Flying somewhat under the radar at BaselWorld this year was one of the most classically beautiful and well-made watches at the show. We’re talking about Laurent Ferrier’s Minute Repeater, housed in the brand’s School watch case. For a seeming first effort at an acoustic timepiece, the repeater is immaculate. The chime is clean and pure—a fitting musical accompaniment to Laurent Ferrier’s now-famous aesthetic codes.

But in fact, the watch is hardly a novelty in the true sense. Work began on the project when the brand was founded, and some aspects of the movement can even trace their origins to BNB Concept—a specialist in the design of complicated movements for leading watchmakers—as far  back as the early 2000s. There, a modern, high-quality minute repeater ebauche was developed. That design and know-how followed principals Michel Navas and Enrico Barbasini at their subsequent venture at La Fabrique du Temps, where the pair were valuable early consultants for the nascent Laurent Ferrier brand. The look of the movement, however, was wholly influenced by Ferrier himself.

“Back in 2009, the movement design was inspired by the original work of A.L Breguet whose design principles are available in the book Complicated Watches by Antoine Simonin,” explains Laurent Ferrier. “This is a bible for movement designers—particularly for minute repeaters. My son Christian was involved in this project since its inception.”  Both Laurent Ferrier and his son were also involved in the brand’s Double Hairspring Tourbillon, and in the interest of launching this watch as a debut for the small brand, the decision was made to postpone the minute repeater indefinitely.

In 2017, Ferrier decided to reopen the project using the same design, but with some technical updates.  “The original file of drawings has always been with us and we are perfectly legitimate in giving it a fresh start,” says Ferrier. “For instance, we decided to implement our own hand-setting system because it is more efficient. Of course, the main plate and all the bridges were fully designed by myself since the beginning.”

The key measure of the timepiece—the sound—is as much a product of the watchmaker’s hand as the design of the movement. Ferrier entrusted the critical job of assembly and tuning to an independent watchmaker who is a longtime friend. It is this individual’s capabilities, more than anything else, that determines the output of this timepiece. At just 2 -3 pieces per year ($345,000), this exceptional minute repeater will be very hard to get.