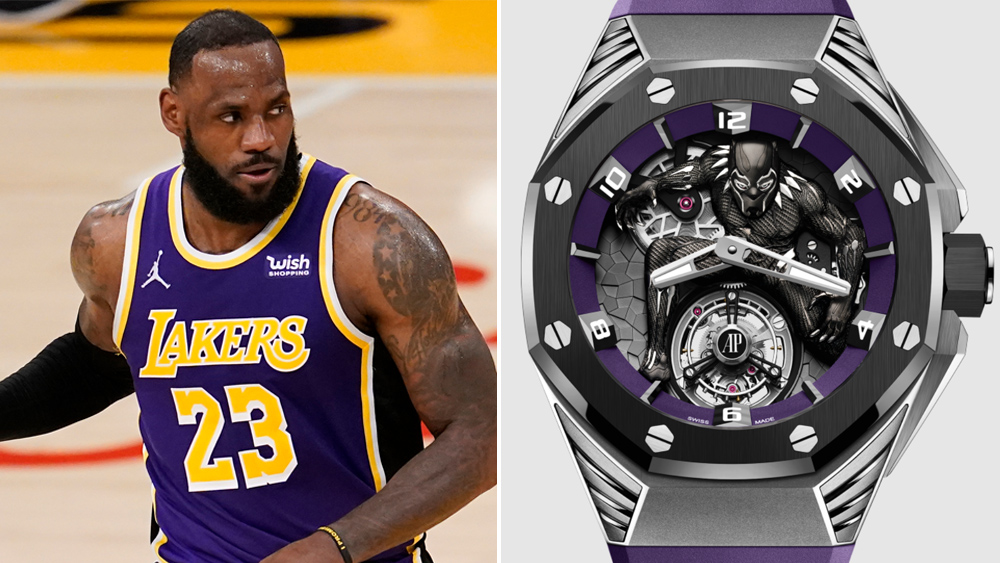 Normally, LeBron James wows us with his play on the court, but last week the watch on his wrist was the star.

The Lakers star, who is currently on the mend after suffering a high-ankle sprain last month, was spotted wearing Audemars Piguet’s new Royal Oak Concept “Black Panther” Flying Tourbillon watch while watching his team take on the Boston Celtics last Thursday. The eye-catching watch was the perfect accessory to wear as fans returned to Los Angeles’s Staples Center for the first time all season.

It’s easy to see why King James would want to wear the King T’Challa-inspired timepiece for such a big night. Its purple rubber strap matches one of the Lakers’ two primary colors, complementing the purple and brown ensemble the four-time NBA champion wore to the game. Of course, what really sets the watch apart is the figurine of Black Panther on its dial. Standing heroically over the tourbillon at 6 o’clock, it is crafted from white gold and has been laser-carved and hand painted to look just like the beloved character portrayed by the late Chadwick Boseman in the Marvel Cinematic Universe movies.

The piece’s satin-brushed 42mm case, which is topped with matching black ceramic bezel, houses the Caliber 2965, a hand-wound mechanism with a flying tourbillon first released in the RO Concept Collection in 2018. It also has a sapphire-crystal caseback that shows off its titanium geometric bridges, the back of the tourbillon cage and part of its gear cage. It all looks like it was crafted in T’Challa’s technologically advanced home country, Wakanda. It also has a 72-hour power reserve, which means it’ll last as long in a fight as one of the Avengers.

To be sure, the Royal Oak Concept “Black Panther” Flying Tourbillon is a timepiece fit for a king—and has the price tag to match. The watch costs CHF 150,000 (about $163,900 at current exchange) and is limited to just 250 examples. We have a feeling James, a former AP ambassador who remains a friend of the brand, had no problem snagging one of his own, especially since he appeared in the virtual press event announcing the watch. Regardless, one thing is clear: James likes the look of the black-and-purple watch, and we expect to see a lot more of it as he and the Lakers prepare to defend their crown in this year’s NBA playoffs.