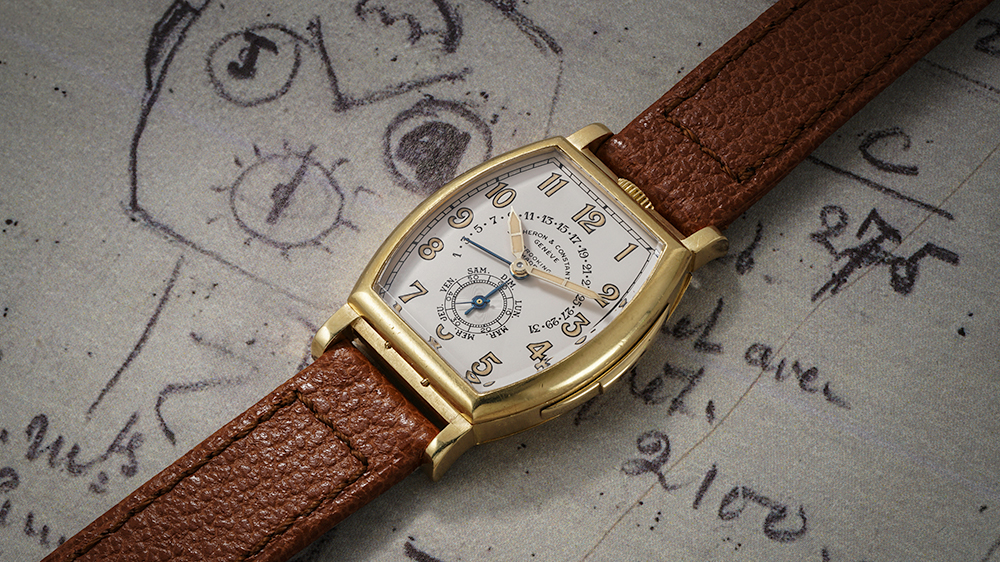 Among vintage watch collectors, the notion of a “holy grail” may be overused, but there is no denying the term’s applicability to a 1940 wristwatch from Vacheron Constantin slated to go on the block at Phillips’s Geneva Watch Auction: NINE on May 11.

Some indication of the piece’s importance comes via a video testimonial that Phillips, in association with timepiece partner Bacs & Russo, put together to promote the sale. Featuring famous talking heads, such as independent watchmaker Philippe Dufour and noted watch scholar, author and collector John Goldberger, waxing poetic about the piece—a yellow gold minute repeater with retrograde calendar in a barrel-shaped case, estimated at 400,000 to 800,000 CHF (approximately $400,000 to $800,000 at current exchange)—the video gets at the heart of why some people consider it the most important wristwatch ever made by Vacheron Constantin.

“You have a watch that in the 1930s was a novelty,” watch expert Aurel Bacs says on the video, referring to its singular reputation as one of only three extant wristwatches featuring calendar complications and a minute repeating mechanism made before the end of the 1940s. “It was revolutionary.”

Alex Ghotbi, head of sale of Phillips in Geneva, goes a step further when describing the tonneau-style watch, which captivated him from the moment he first saw it in a black and white photo in a 1992 book, L’Univers de Vacheron Constantin Geneve.

“For me it was the most beautiful thing I had seen,” Ghotbi says on the video. “I spent 25 years dreaming of the watch until the day we figured out where it was.”

A number of other factors contribute to the wristwatch’s extraordinary reputation: Commissioned in 1936 by a Spanish mining magnate named Francisco Martinez Llano, the piece was brokered by the Madrid retailer Brooking, whose name appears on the dial. Llano, known to family and friends as “Don Pancho,” had his initials engraved on the caseback in blue enamel. He also made an unusual request of the Geneva watchmaker—that the piece be produced with two dials, one with enameled black Breguet numerals and the other with radium numerals.

Four years in the making, the watch—bearing only one radium dial—was delivered to Don Pancho in 1940 and remained in his possession until his death in 1947. After that, the trail went cold. Unbeknownst to collectors, the wristwatch, which over time had become the stuff of legend, spent 60 years in a family vault in Latin America, where it was subject to the vicissitudes of time. The heat and humidity did a number on the dial and the movement, both of which were in states of disrepair when it surfaced in 2011, after the anonymous owner, a descendant of Don Pancho, reached out to Ghotbi.

“All my fears that it would be overpolished, repaired, it would have soldering marks, the dial would have been poorly restored—all this was gone in a split second,” Bacs says.

Phillips took the unusual step of asking the manufacturer to intervene. For its part, Vacheron Constantin dove deep into its archives to research the piece. Not only did the brand’s watchmakers restore the movement using original components when possible, they created, according to Bacs, “a new absolutely faithful one-to-one copy of the original dial,” using techniques from the 1930s (with the exception of applying modern luminous material, instead of radium). The eventual buyer will take home the original, unrestored dial as well as duplicate documents and sketches from the Vacheron Constantin archives.

In the end, Dufour sums up the piece’s immense appeal best: “It’s what we’d call a true minute repeater, with well-made steel parts and beautiful shapes, which is important,” he says in French. “And in terms of finishing and bevelling, it’s always a pleasure to look at.”