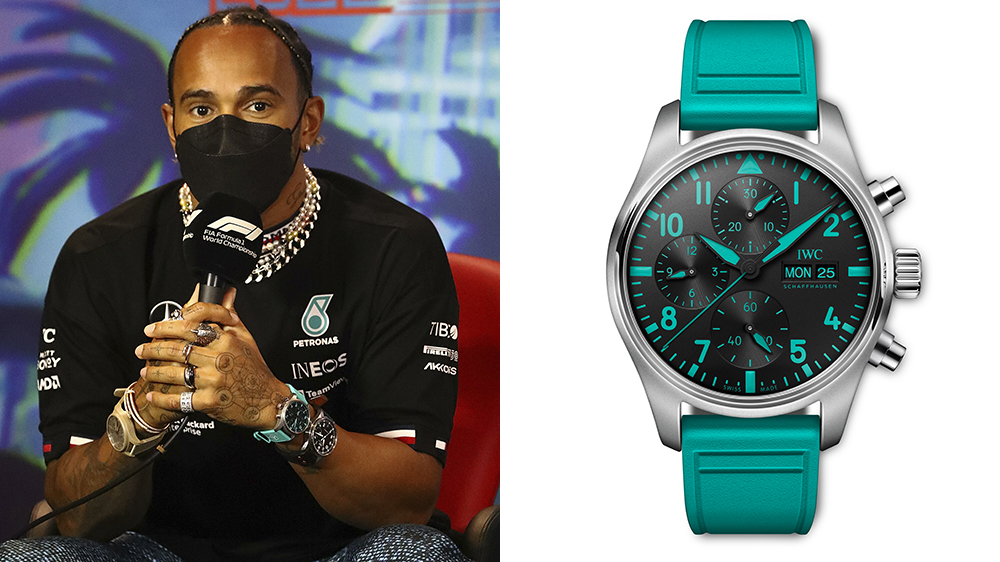 Less than 24 hours after it dropped, IWC’s new chronograph was already creating a buzz.

The watch, created for fans and team members of the Mercedes-AMG Petronas Formula 1 Team, was one of three timepieces (and several necklaces and rings) that champion racer Sir Lewis Hamilton wore in an apparent protest of an F1 regulation banning drivers from wearing jewelry on the track.

At a Friday press conference ahead of the Miami Grand Prix, a bling-laden Hamilton told reporters that he’d skip the race, planned for May 8, if the sport’s governing body actually enforced the ban.

“We’ve got a spare driver so we’re all ready and prepped for the weekend,” he said, according to ESPN. “There’s lots to do in the city anyway! It’ll be good either way.”

The rationale for the rule, which was also in the news ahead of April’s Australian Grand Prix, is that earrings, necklaces and other jewelry can get in the way of medical care, snagging at attempts to remove a driver’s helmet if need be. But Hamilton and other drivers characterized the ban as a distraction.

“I think we’ve made really great strides as a sport. This is such a small thing,” Hamilton added. “I’ve been in the sport for 16 years and I’ve been wearing jewelry for 16 years. In the car, I only ever have my earrings on and my nose ring, of which I can’t even remove. It seems unnecessary for us to get into this spat.”

The ban would mean that Hamilton wouldn’t be allowed to wear the watch, the first one IWC has created during its longstanding partnership with the team, during Sunday’s race, even if his colleagues in the pit have it on.

The new, Pilot’s Watch Chronograph 41 Edition “Mercedes-AMG Petronas Formula One Team” was made to underscore “the spirit of unity and the sense of belonging within our team,” according to a statement Toto Wolff, the team’s CEO. But it’s also a testament to their relationship with IWC. The two companies have worked together since 2013, with IWC serving as the team’s official engineering partner. The team’s designers, aerodynamicists, race engineers, strategists and mechanics, will wear the watch on race day in recognition of the partnership.

A view of the watch’s eye-catching dial and transparent caseback.  Courtesy of IWC Schaffhausen

Fittingly, the watch was made to withstand the rigors of life at high speed. IWC outfitted the watch with a lightweight, grade five titanium case. The material has the highest strength-to-density ratio of any metal and is highly corrosion-resistant. The 41 mm watch runs on the Swiss watchmaker’s 69385 calibre, a chronograph movement with 231 individual parts capable of up to 46 hours of power reserve. It has a transparent caseback that allows you to see what it looks like in action.

The sporty watch, whose dial, subdials and hands are in the team’s signature green, comes with two straps: One is made from embossed black calfskin, while the other is made from rubber tinted in the team’s signature Petronas green color. For even more convenience, the timepiece features an integrated EasX-Change system that makes swapping between the two straps easy.

“Both fine watchmaking and racing are all about precision, craftsmanship and performance engineering. But it’s the human factor—the passion the love and the dedication that make all the difference between good and great,” says Chris Grainger-Herr, CEO of IWC Schaffhausen, in a statement. “This notion perfectly describes our long-standing partnership with the Mercedes-AMG Petronas Formula One team.”

With eight championships won between 2014 and 2021, the Mercedes-AMG Petronas Formula One team holds the record for the most consecutive constructors’ titles. Will they uphold their streak this season? We’ll be watching to find out.

Although the races don’t kick off until May 8, you can purchase the watch through IWC’s website now for $7,850. Whether you wear it behind the wheel is up to you.