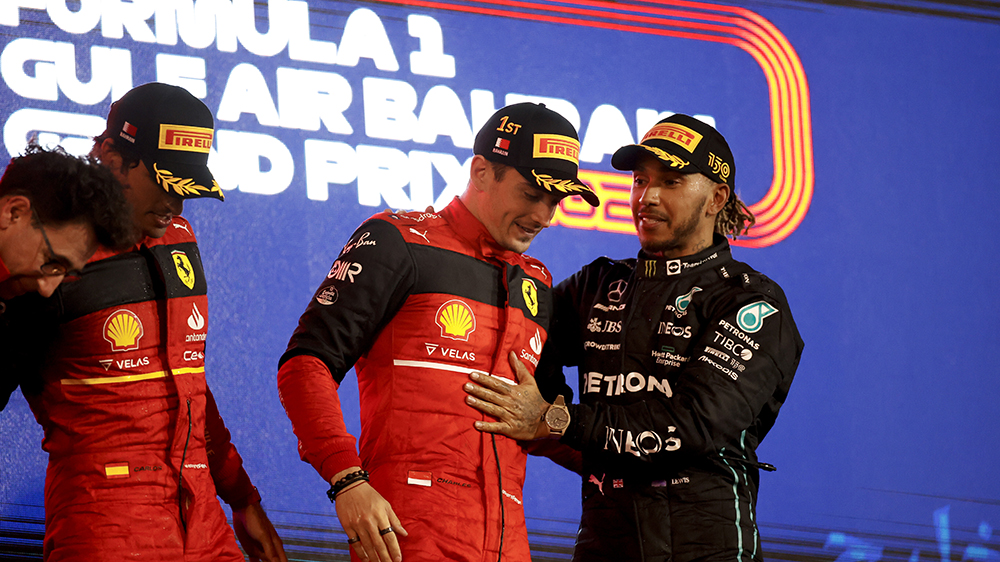 The Mercedes team driver could be seen wearing his trusty IWC Big Pilot’s Perpetual Calendar Top Gun Edition “Mojave Desert” while celebrating on the podium after finishing third at the season-opening Bahrain Grand Prix on Sunday. He may have finished behind Ferrari’s Charles Leclerc and Carlos Sainz but his place in the top three means that the 37-year-old is the first driver to finish on a podium in 16 consecutive seasons.

Almost as impressive Hamilton’s latest achievement is the timepiece itself, which is the first Big Pilot’s Watch with a perpetual calendar. Inside its 46.5 mm sand-colored ceramic case you’ll find large brown dial that features four easy-to-read sub-dials (date, weekday, month and moon phase) and a four-digit year display. It’s powered by IWC’s 52615 Calibre automatic movement, which has 381 components and 54 jewels, and a power reserve that will last you seven days.

Oh, and if you wondering, the watch wasn’t inspired by the Tom Cruise movie or its upcoming sequel. The Top Gun collection, which launched in 2007, isn’t a marketing campaign tied to the franchise at all. The watches from the line were actually developed for the Navy Strike Fighter Tactics Instructor program, which is popularly known as TOPGUN, according to Chrono24. It’s that program that inspired the movie, not the other way around.

Hamilton is a brand ambassador for IWC and we’ve been told that the $35,000 timepiece is one of his personal favorites, a fact supported by the regular appearances it makes on his Instagram account. We expect to see it make at least a few more appearance on the podium this Formula 1 season. Sunday’s top-3 finish was the 183rd of his career, which is 61 more than the next closest active driver, Sebastian Vettel.

We imagine Hamilton, who barely missed out on a record-breaking eighth Driver’s Championship last season, hopes that the majority of his podiums this year are for first and not third place finishes, though.