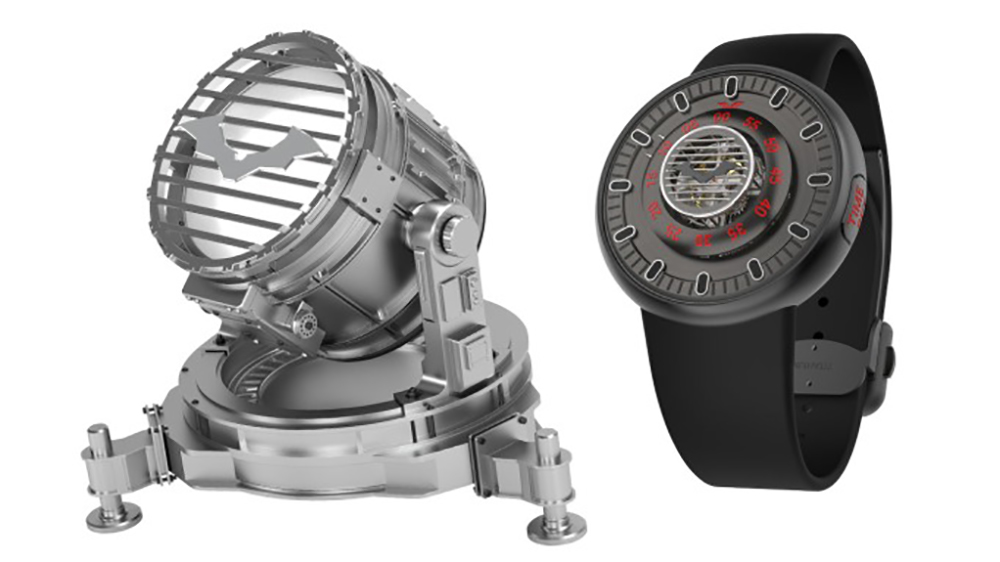 Among the many Warner Bros.-licensed products that are rolling out in tandem with the release of the highly anticipated The Batman movie—ranging from Lanvin and EleVen by Venus Williams apparel to Carhartt hoodies, Puma sneakers, Funko Pop! figures and Emilie Heathe nail polish—likely the most expensive item in the mix is a luxury timepiece.

It features a design inspired by the reimagined Bat Signal seen in the new Robert Pattinson-starring film, due out March 4.

And the purchaser gets not just the black-and-red timepiece, but also a functional, light-up aluminum sculpture of the Bat Signal. Together, the two pieces make up the limited-edition Batman Collector Set, of which only 10 are being produced and which will arrive in a specially made wooden box.

Marco Tedeschi, founder and creative director of Kross Studio, tells The Hollywood Reporter that two out of 10 of the collector’s sets have already been pre-sold.

As for the watch’s specs, it’s a 45mm hand-wound timepiece with a five-day power reserve and is water resistant to 30 meters. It’s made of grade 5 titanium with black DLC coating and features a one-revolution-per-minute tourbillon in the center—“which is not something very common in tourbillon watches,” says Tedeschi—with a bat emblem on the louvered tourbillon cage. (A tourbillon is a rotating, caged mechanism engineered to combat the effects of gravity on a watch’s accuracy.) Powering the watch is Kross Studio’s in-house developed and produced caliber KS 7’000. In all, there are 283 parts in the watch, each hand-made and assembled in Switzerland.

The watch comes with a set of one-click, interchangeable straps, one in black leather embossed with the pattern of the DC superhero’s chest armor, one in black rubber with black stitching and one in red rubber with red stitching.

Black indices tell the hour, while minutes, shown in red, are displayed on a rotating central disk. To set the time, the wearer presses a button which reads (quite straightforwardly) “Time Set” on the edge of the case while turning a D-Ring on the case back in either direction.

“We wanted to create a link between the wearer of the watch and the Batman himself. We thought it would be really fun if the Bat Signal was there, that you [feel you] could call the Batman if needed. That was the starting point of the inspiration in our design,” says Tedeschi.

The companion art piece, meanwhile, clocks in at nearly 13 inches tall. “We converted the Bat Signal into a functional piece of art,” explains Tedeschi. “It’s a light, so you can use it to light up a room and it’s also a watch box, so on the bottom there is a compartment to hide and store a watch.”

“We had access to some pictures of the set because the Bat Signal is completely new,” continues Tedeschi. “But to create something accurate we needed to have much more details, so we had the chance to work together with Warner Bros. and get 3D models as well to adapt.”

A still from the upcoming ‘The Batman’.  Courtesy of Jonathan Olley/DC Comics

In conjunction with the premiere of the Matt Reeves-directed The Batman—whose cast also includes Zoë Kravitz, Paul Dano, Andy Serkis, John Turturro, Jeffrey Wright and Colin Farrell—Kross Studio is also releasing a collection of four watch rolls screen-printed with the likenesses of characters from the film. Two are dedicated to Batman, one to Catwoman and one for the Riddler. “We played with the different leather textures,” says Tedeschi, noting that for the Catwoman roll, “we added some scratches on it just as if a cat did scratch the roll. We are trying to make it funny but still luxurious.” Priced at $250 each, they feature snap-top closures, black microfiber interior fabric and removable pillow inserts for cushioning.

All items are available for sale at kross-studio.ch.