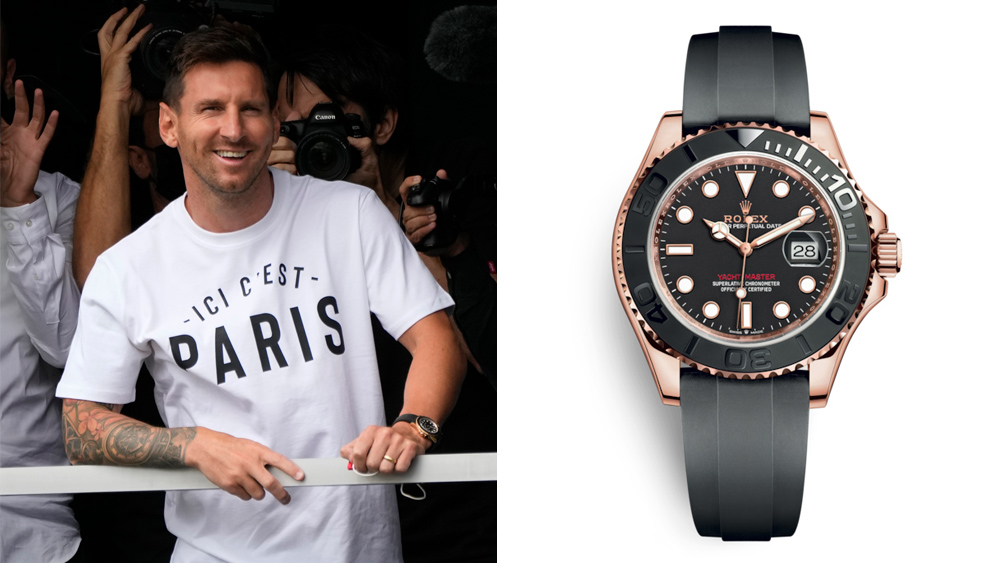 What kind of watch do you wear for your first day at a new job? If you’re Lionel Messi, the answer is easy: a Rolex.

The Argentinian soccer star was spotted wearing a gorgeous rose gold Yacht-Master as he arrived in Paris to sign with PSG on Tuesday afternoon. The sporty-yet-elegant timepiece was an appropriate choice for a player signing his first contract with a team other than the one he grew up playing for.

Barcelona shocked the sports world last week when it announced that Messi would be leaving the club after 21 years. Years of financial mismanagement and a newly implemented salary cap meant the Spanish club could no longer to afford to pay him, even after he agreed to a drastically reduced new contract. Monday’s tearful goodbye to the Barca faithful suggested that Messi probably isn’t overjoyed to be moving to the French capital, but it’s clear he’s trying to make the most of a difficult situation. And the first step in that process was showing up to his new job with a smile on his face, “This is Paris” stamped across his t-shirt and a Yacht-Master on his wrist.

And what a timepiece Messi chose for his first day. The Oyster Perpetual Yacht-Master, ref. 126655, is a true beauty that has been referred to as an “era-defining timepiece” by this magazine. It has a 40mm 18 karat Everose gold case that houses a black dial and is topped with a matte black ceramic bezel. It’s powered by the watchmaker’s new-generation 3225 automatic movement, has a 70-hour power reserve and a durable Oysterflex bracelet with a matching Everose safety clasp. It retails for $27,300, which is no small sum, but then again Messi’s new two-season contract is believed to be worth roughly $40 million a year.

Meanwhile, the soccer star’s Rolex wasn’t the only luxury watch on display on Tuesday. During the formal announcement of Messi’s contract, PSG president Nasser Al-Khelaifi could be seen wearing the new Patek Philippe Nautilus. You know, the one with the olive-green sunburst dial that has become virtually impossible to find since its release this spring? Of course, when you make $40 million a year, or are able to write a check for that much, in-demand watches are just a little bit easier to find.