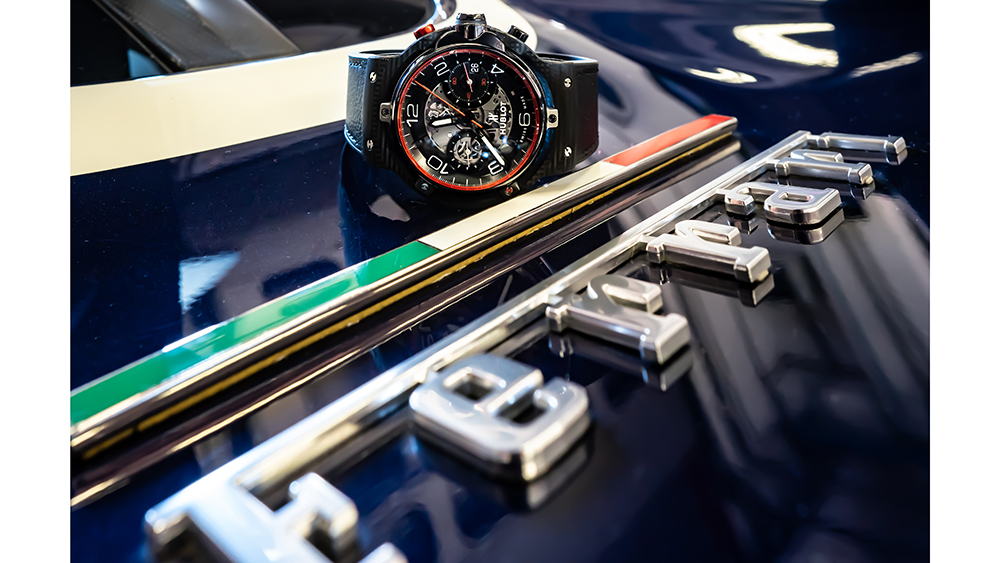 It wasn’t that long ago that one of the most closely monitored datasets coming out of Italy was the stats of the country’s motorsport champions. Covid-19 hit Italy early and hard, especially Northern Italy where factories like Ferrari, Lamborghini and Ducati have ceased production and world-famous raceways like Tuscany’s Mugello currently sit empty and silent. Hope glimmers in the rescheduling of races, including a stage of The Ferrari Challenge slated for the Mugello circuit in August. Whether such optimistic schedules can be met remains to be seen, and the mere image of Ferraris roaring past thousands of tightly-packed fans is, alas, no longer easy to conjure.

The meaning of motorsports in Italy is forged in the community celebrations that accompany a race. When I attended last year’s Finali Mondiali, the European edition of the Ferrari Challenge, cafes were filled with those seeking espresso, camaraderie and live coverage. Extended families gather in their homes to cheer their favorite drivers. And convoys of motorhomes and overstuffed station wagons crawl bumper-to-bumper toward the raceways for weekend-long outings with family and friends. An Italian race is, ultimately, a grand communal celebration of the best the country has to offer: the world’s most talented racers driving the world’s fastest and most beautiful cars and motorcycles in front of what are arguably the world’s most socially outgoing, fervent and stylish fans. Covid-19 having suddenly shut all of that down presents an eerie picture of how this pandemic has impacted every aspect of what makes the Italian lifestyle the envy of the world.

Fans of The Iron Horse were treated to parade of late-model Ferraris outfitted for the track at Mugello Raceway.  Allen Farmelo

But glimmers of hope matter now more than ever, and it is perhaps healing to recall that Italian motorsport was in full swing just months ago. And no racing event is as decidedly Italian as The Ferrari Challenge, a year-long racing program in which owners of track-ready Ferraris compete against each other on the most technical tracks in Europe, North America and Asia. The Finali Mondiali (World Final) of The Ferrari Challenge sees the leaders from those three continents race each other for the year’s biggest trophies.

The event is the largest annual gathering of Ferraris, and thus a veritable feast for the eyes, ears and hearts of those who revere The Prancing Horse. The 2019 edition of the Finali Mondiali was held at none other than the Mugello Raceway, a highly technical track nestled in the hills north of Florence in Maranello, home to Ferrari’s factory and museum. The surrounding area is also home to Maserati, Lamborghini, Ducati, Pagani, M.V. Agusta and more. It costs teams an estimated $3-million each year to participate in the Ferrari Challenge, and participants range from self-funded private individuals to professional drivers with corporate sponsors. Depending on the driver’s level of experience, he or she will compete in one of four categories against drivers in the same model Ferrari, either an 812 Superfast (Ferrari’s fastest production car to date) a 488 GT (running Ferrari’s most powerful twin-turbo 8-cylinder engine), the track-only 12-cylinder FXX (a prototype with which Ferrari tinkers with their latest tech), or a bonafide Formula 1 Ferrari racer. Ferrari refreshes the 812 and the 488 GT each year, making the Ferrari Challenge a testing ground for the company as well as an opportunity for all 1000 of these elite customers to become part of the coveted R&D process at Ferrari. If it’s Italian and it goes fast, it’s made nearby.

Approaching the Mugello circuit by car on the first day of the Finali Mondiali was like attending a Ferrari parade. There were more than a few young families packed into $350,000 12-cylinder GTC4 Lusso hatchbacks, while a pair of gray-haired women sporting huge movie-star sunglasses and silk scarves, worn babushka-style, chatted away in a $215,000 Portofino with the top down. A seemingly countless number of incognito drivers hid behind the tinted glass of 812 Superfasts, F8 Spyders and 488 Pistas. All these cars purred impatiently, awaiting entry into the Mugello grounds where high-end trackside accommodations and a museum with over $1 billion worth of vintage Ferraris would eventually greet them.

Over $1 billion worth of Ferraris were on display during The 2019 Ferrari Challenge at Mugello.  Allen Farmelo

One joy of attending the Finali Mondiali is watching friends and family out on the track unleashing the cars, but it’s clearly the deep dive into the vibrant social culture of Ferrari that’s the main draw to this weekend-long event. Men head-to-toe in Brunello Cucinelli puff large-gauge cigars and toss back Negronis with radiant women in evening gowns on their arms (in some cases one on each arm). Attendants naturally group themselves according to language, with huddles of Japanese folks breaking into laughter at some indecipherable punchline, Italians interrupting each other in escalating dialogue about the race, and a smattering of Americans—yours truly included—engaging in uncharacteristically subdued conversation that emerges when we trod on another country’s best turf.

To be surrounded by hundreds of Ferraris was a rare and surreal treat. Six of the new roofless Ferrari Monzas were lined up on the Mugello grounds—likely, the largest assemblage of that model in the world. This so-called naked car is built around the 812 Superfast power plant, the fastest to ever leave the Maranello factory. Able to reach 100km in 2.9 seconds, the indescribable thrill of that acceleration is available for those who can secure tickets for a “hot lap” in an 812 out on the track.

Exactly 29 Monza owners attended the Finali Mondiali, and were treated to a private lounge with panoramic views of the racing, an espresso and champagne bar and all the Monza accessories: a stunning hand-made carbon-fiber-and-leather helmet, a cashmere scarf, a tailored high-tech driving suit and the opportunity to purchase an exclusive Hublot watch designed in conjunction with Ferrari’s team.

As the official timekeeper of the Ferrari Challenge worldwide, Hublot has found a perfect match for its cutting-edge timepieces, and Ferrari’s design department agrees. While a number of Hublot Big Bang models have been created with Ferrari since 2011, the latest Ferrari edition is built on the Hublot Classic Fusion. Available in titanium, rose gold, or 3D carbon fiber, the Ferrari GT Classic Fusion captures the spirit of the car itself rather than the typical surface cues of the Ferrari brand. This is a refreshingly subtle approach to a collaboration watch.

Hublot worked directly with Ferrari’s designers to build the watch as if it were itself a Ferrari. Most notably, the central part of the watch—which houses Hublot’s Unico in-house Caliber HUB1280, a stunning self-winding chronograph made from 354 individual parts—is suspended in an outer chassis, just as a Ferrari engine is suspended within the car. The sapphire caseback exposes the in-house movement like the windows above Ferrari’s engines, and, meanwhile, the skeletonized dial and steel rehaut pull the eye into the decidedly high-tech movement.

Hublots were on wrists everywhere you turned at the 2019 Finali Mondiali, especially at the trophy presentation and gala dinner that wrapped up the year of racing. With disco lights flashing off the watches’ high-tech surfaces at one moment, and candlelight catching a dial full of pave diamonds in another, appreciating Hublot’s high-tech elegance became unavoidable. Perhaps nowhere else were these timepieces more at home than on the wrists of those in their evening-best at Ferrari’s biggest annual racing event.