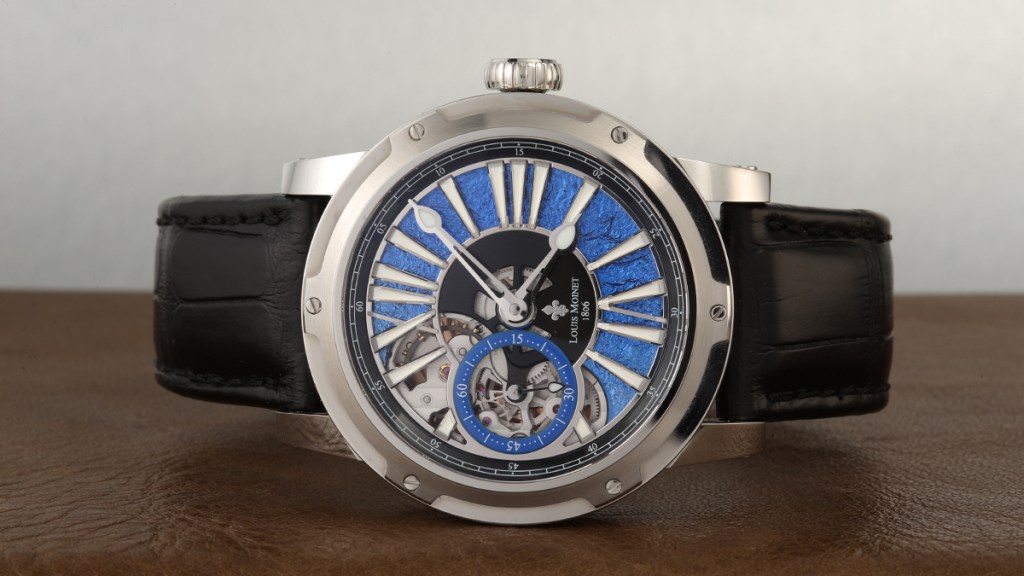 As the years press on, Louis Moinet remains one of those under-appreciated favorites around Robb Report HQ. Producing a total of only 500 timepieces a year (and consistently selling out), the brand continues to build on their relationship with movement maker Concepto—builder of high-grade tourbillon, chronograph, and simple 2- and 3-hand mechanical calibers—all while refining new and unique finishes for their dials and cases.

Getting hands-on time with anything from the firm can be challenging on a good day, so when the opportunity came for the Metropolis—the brand’s new entry-level offering priced at a modest $12,900—to swing by the office for a Watch of the Week review, we simply couldn’t say no.

Over the years we’ve seen a good number of fairly spectacular blue dials, but the “Magic Blue” used by Louis Moinet is in a league of its own. We first saw this new Magic Blue finish on the Louis Moinet Space Mystery at Baselworld earlier this year, and even then, company founder Jean-Marie Schaller flat out refused to give any hints as to how it was produced. A vibrant reflective hue appears to be laid over a textured metallic surface, but beyond that your guess is as good as ours.

This punch of blue on the Metropolis’ dial is (thankfully) not overwhelming, thanks to the use of suspended openworked hour markers, as well as the exposed quadrant of its caliber between 8 and 12 o’clock. Its 43.2mm steel case is equally detailed, featuring a thin notched bezel and an interesting beam-like structure forming the lugs which support the main case barrel. This combined complexity of dial and casework gives the piece a surprising level of balance—arguably more than initially expected.

The self-winding LM45 caliber powering the Metropolis was a co-creation between Louis Moinet and Concepto, and features a 48-hour power reserve running at 4 hertz. The caliber is finished with a mix of Côte de Genève striping, perlage, and finally a concentric Clou de Paris motif on its winding rotor. Unlike the brand’s more complex calibers, the Metropolis offers only a simple hour and minute indication accompanied by a small seconds subdial at 9 o’clock.

There’s a unique design DNA to Louis Moinet timepieces that we make them solid candidates for both formal and casual occasions. The case of the Metropolis is a touch thick (14.8mm, to be precise) when it comes to dealing with shirt cuffs, but it would make a bold statement when paired with the elegant and traditional aesthetics of the recent Caruso X Loro Piana collaboration. If you’re more inclined to streetwear, its punchy blue dial would pair equally well with the limited-edition boots from George Esquivel we recently featured as well.

The 60-piece limited edition has just started arriving at Louis Moinet’s 14 stateside retailers. A total of four dial variants of the Metropolis will be available, including two steel-cased versions, one in DLC-treated steel, and one in 18K rose gold.