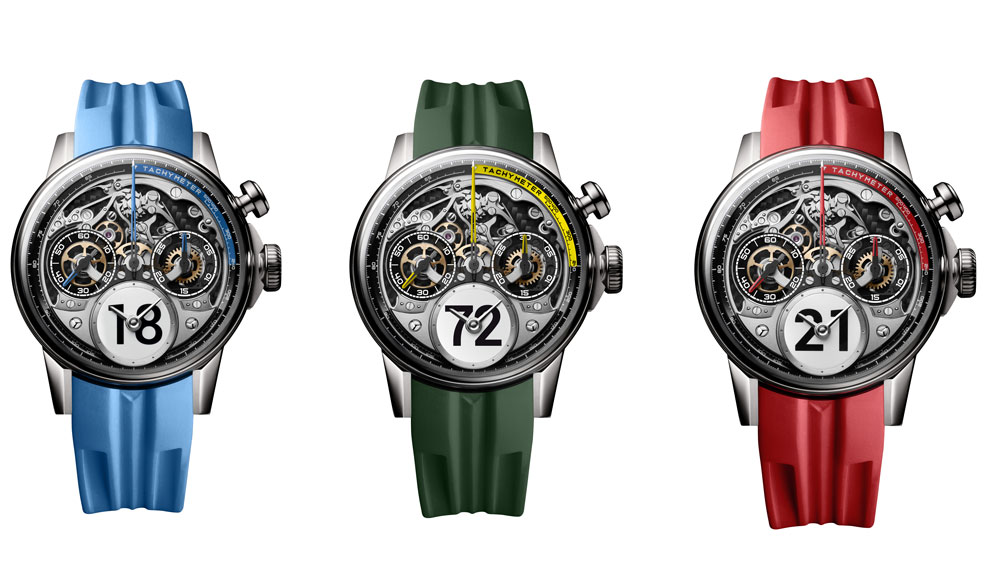 The race to customization among watch companies has led to some pretty creative solutions in the past few years, most of them unattainable by the average collector. Making a piece one-of-a-kind is a difficult proposition because, as a rule, the more unique a watch is, the higher the price. But Louis Moinet is taking a winning lap in the bespoke competition with its Time To Race chronograph.

Here’s how it works: You pick a choice of three colors including Rosso Corsa (the Italian red racing color), Green Racing (a British signature) and Bleu de France (a color that is generally representative of that country). Next, you choose a number between 1 and 99. Put them together and you’ve got a one-off.

Louis Moinet will produce each color with any individual number only once. In other words, it will produce from 1 to 99 in Rosso Corsa, from 1 to 99 in Bleu de France and from 1 to 99 in Green Racing. So, in total Louis Moinet will make only 297 pieces in this collection which, by the way, does not make it a limited edition of 297 pieces, since each piece is different. It’s more like 297 watches that have a lot in common but which are all different. This is one of those times when it will be important to be the first in line for a watch, unless you’re prepared to pick a different lucky number.

The 40.7 mm case is covered with a chevé (dome-shaped) sapphire that curves directly over the triangular flange and then drops to the case. The purpose is to create a panoramic view of the openworked chronograph movement, which is even raised a bit to sit flush with the crystal. The dramatically long, stretched-out, curved seconds hand is also a standout, and it’s designed like that for a reason: It tracks indexes on the tachymeter scale on one side of the triangle peak, and the 60-seconds track on the other.

The chosen color is applied to the rubber strap and the indexes on the first quarter of the tachymeter scale, and the hash marks, hands and numerals light up in the dark thanks to blue and green Super-LumiNova. The chosen number is not part of the functional index but appears as the background on the hour-and-minute dial at six o’clock. It is made with neoralithe, a translucent resin that is fired like enamel and takes a high polish. The Louis Moinet Time To Race is priced in Swiss francs at CHF 30,500 (about $31,000).