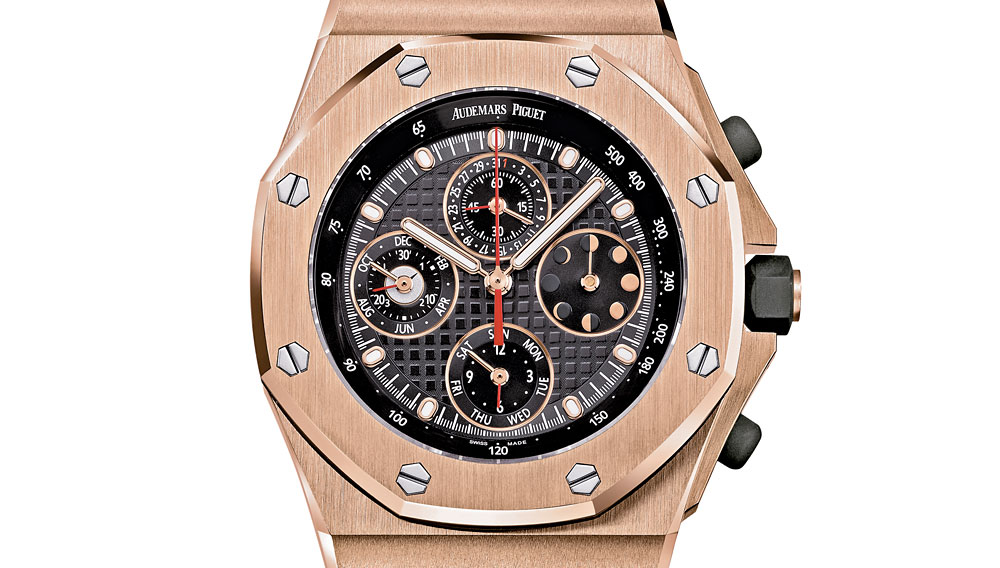 Not long after the 40th anniversary of Audemars Piguet’s flagship Royal Oak model—an occasion the watchmaker celebrated in 2012 with various galas, the introduction of special models, and a global exhibition—another milestone is being observed, though with much less fanfare. The company released the Royal Oak Offshore in 1993, and that addition to the line not only changed the way Audemars Piguet—and its many imitators—designed watches, but also altered men’s taste in timepieces for the next two decades.

Although the Royal Oak Offshore’s dimensions are commonplace today, at the time of its unveiling, the timepiece seemed almost absurdly large. Yet the watch’s proportions, which were meant to convey robustness and durability, proved to be an irresistible draw (especially when rendered in gold) for many young buyers whose style sensibilities were not satisfied by the more discreet Swiss designs then prevalent. Audemars Piguet reinforced this interest by releasing a number of limited editions that personified the bold spirit that customers associated with the large design. Further brand awareness was cultivated by such high-profile clients as Arnold Schwarzenegger and Jay-Z, whose enthusiasm for these timepieces helped to make them among the most collectible examples of the last 20 years.

The creation of these innovative Royal Oak Offshore editions also had a lasting impact on the culture of Audemars Piguet. In 2003, under the direction of then-CEO George-Henri Meylan, company designers were asked to incorporate a number of new features and materials into a version for Formula 1 driver Juan Pablo Montoya. “The complexity of the design forced us to work much more closely with the technical office than we had previously,” recalls Octavio Garcia, the company’s chief artistic officer. “We shared computer files directly with them and engaged in a new design approach based on details.” That same process gave rise to other complicated timepieces, such as the Tradition of Excellence Cabinet #5 and the Millenary MC12, whose unique combination of artistry and precision engineering inspired the industry at large. 212.688.6644, www.audemarspiguet.com