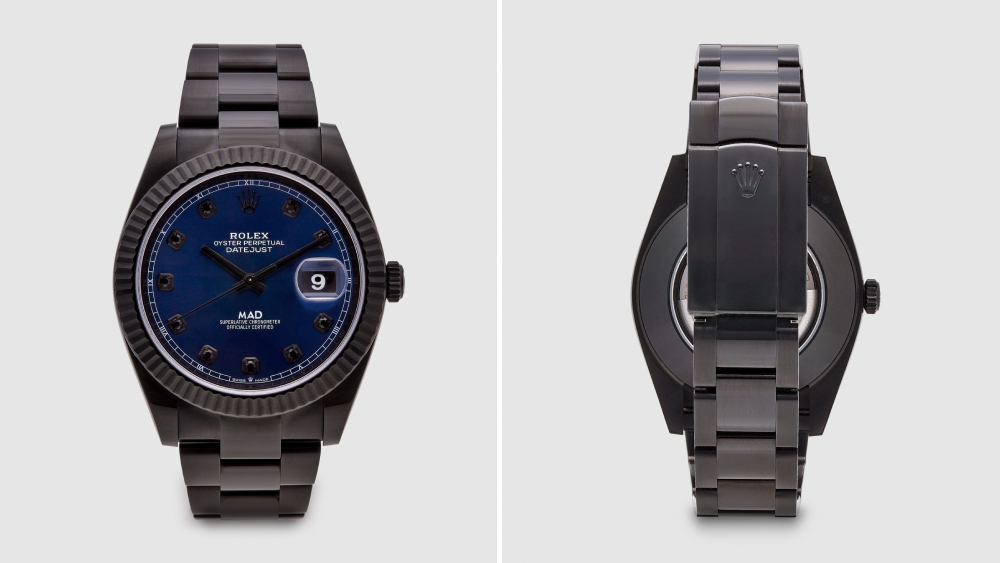 While it’s near impossible to improve upon a classic, MAD Paris seems up to the task with its latest revamp of Rolex’s Datejust 41.

Though its silhouette remains very much intact, this particular Datejust is covered in the kind of black matte finish which has become a signature of the French customization house. It wraps over the bezel, case and bracelet and contrasts with the inky blue dial at the center. The dial is in turn encrusted with faceted black jewels at the hour markings with one exception where the date window lies. Its traditional black and white lettering is mirrored by the white cobranding found on the dial.

Located within the 41mm case is the in-house, new-generation 3235 caliber movement, one of the most precise to ever come out of Rolex’s workshops. All of this adds up to a finished product that stays true to the original design while also imbuing it with a futuristic touch.

The black DLV coating wraps its way around the entire timepiece, including the bracelet.  Courtesy of Dover Street Market

But all the customization doesn’t come cheap. MAD’s version is going for $34,500 while a regulation model straight from Rolex in yellow gold and steel with diamond hour markers sells for a significantly lower $14,450. MAD Paris has built a reputation as the go-to establishment for those with the means and desire to transform some of horology’s most coveted watches to suit their personal aesthetic. The design studio is behind the ‘Rainbow’ version of Rolex’s Daytona and the ‘Grande Fleur’ engraved Audemars Piguet, which have changed the watch game. Most of its production is made-to-order, which means every piece is unique.

Customized watches, however, have long been a thorn in the watchmaking industry’s side. When Bamford Watch Department first started doing blacked-out creations of watches, including Rolex, in 2004 many brands felt that it was taking their original creations and changing them without their authorization, which is, of course, exactly what they were doing. Recently, however, LVMH brands—realizing that if you can’t fight them, you have to join them—started partnering with Bamford on official customized pieces with Tag Heuer, Bulgari and Zenith. Rolex, however, prefers to remain king of its own domain. The brand does not approve of customization of its watches and as a result, anyone that purchases MAD’s version, will forgo Rolex warranties and servicing.

The original version of this Datejust, developed in 1945, became the first self-winding and waterproof chronometer to show the date in a special window located at three o’clock––the feature which lent it its name. The oyster case, fluted bezel, Cyclops lens over the date and the five-piece link Jubilee bracelet have made it a standard-bearer.

But if you’re willing to forgo having a Rolex-approved watch in exchange for MAD’s style, then head over to Dover Street Market’s website to bag MAD’s handsome one-off.