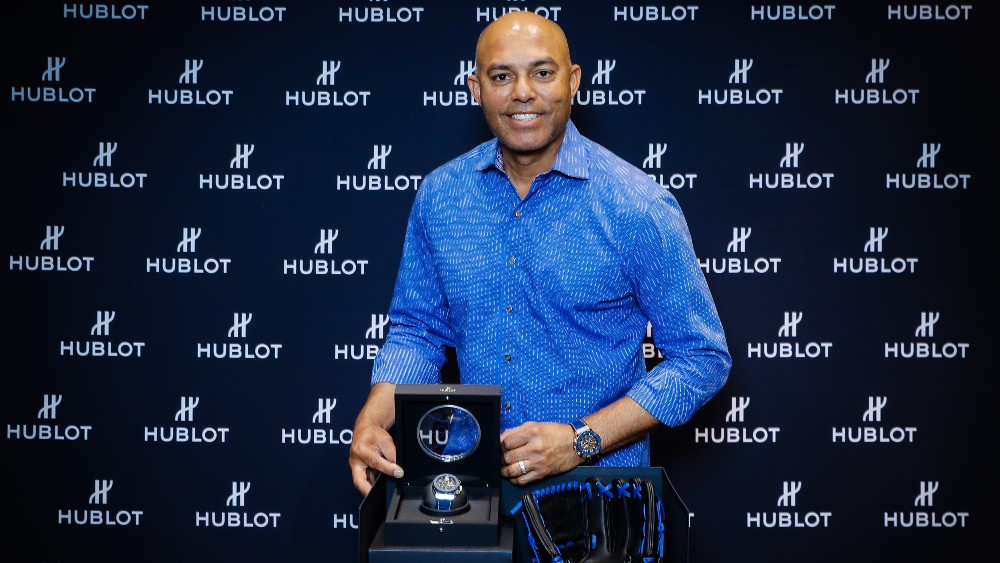 New York Yankee great Mariano Rivera has teamed up with Hublot to celebrate his induction into the Baseball Hall of Fame with a limited edition watch.

Greeted by a violinist playing Metallica’s “Enter the Sandman,” his entrance music as a player, baseball’s career saves leader was on hand for the launch of the Classic Fusion Aerofusion Chronograph Mariano Rivera at America Cut Steakhouse in Tribeca on Tuesday night. Surrounded by friends and owners of the new watch, the “Sandman” toasted the luxe timepiece, which he and New Rochelle, New York-based T & R Jewelers helped the Swiss watchmaker design.

Available in titanium and king gold, the watch is full of callbacks to Rivera’s 19-season-long career with the Yankees, which saw him win five World Series, make 13 All-Star teams and tally 652 saves on his way to becoming the game’s greatest closer. These include a ceramic bezel in the team’s signature navy blue, the number 42 (Rivera’s jersey number) set in stones at 12 o’clock, special counter hands in the shape of bats, and baseball stitching details on the sub-dial and strap. It also features a self-winding chronograph movement, with 207 components and 60 jewels, and a 42-hour power reserve.

“My favorite part was creating the piece,” Rivera told Robb Report of the collaboration. “Just making sure we created something the fans will love and that commemorates the Hall of Fame. You know, 42 pieces. I wanted to make sure I put No. 42 on there. The baseball stitching on the strap. All that was incorporated into the design.”

Rivera, who was presented with a one-of-a-kind Hublot by the Yankees in 2011 in honor of his record-breaking 602nd save, said that a watch was the perfect keepsake to commemorate his induction to the Hall of Fame, the first time any player was voted in unanimously.

“I’ve always loved watches since I was little. I didn’t have the opportunity or funds to buy one. But when I came to the big leagues, I was able to buy the watches that I love. I have some other watches,” he explained, before adding with a smile, “but the ones I like the most are the Hublot ones.”

As part of the evening’s festivities, Jean-François Sberro, Hublot North America’s president, presented Rivera with the first of the numbered gold chronographs, which the baseball player said he plans to raffle off in order to raise money for a learning center his foundation will be building in New Rochelle.

“I’m building the learning center, but I need help—I cannot do it alone,” he told Robb Report. “To everybody who is going to read about this, I need people to donate. It can be a dollar, it can be a million dollars. Together we’re going to build something special.”

And that raffle is the only way to get ahold of the watch now. Limited to just 47 units—42 of the titanium (which retails for $21,100) and five of the gold ($37,900)—the timepiece had already sold out by the time of Tuesday’s party.