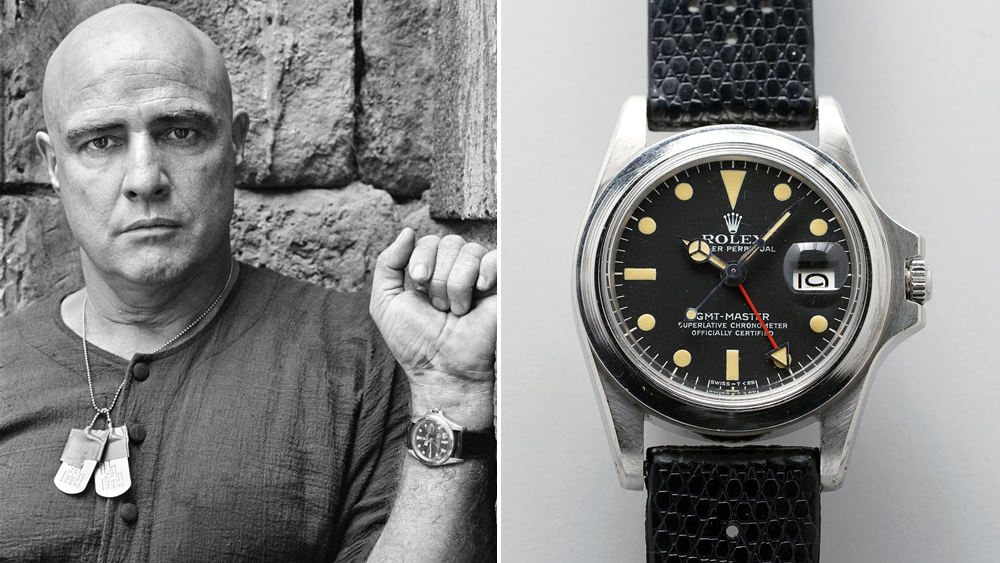 Almost certainly the most important watch owned by the Hollywood legend, the silver GMT-Master, a reference 1675 manufactured in 1972, is missing its bezel, has a black face and matching strap. The watch, which was presumed to be missing for years, is presented in the same shape as when the actor gifted it to his daughter, Petra Brando Fisher, in 1995. What makes the timepiece even more unique is that fact that Brando hand-engraved “M. Brando” on the case back himself.

“Widely considered the greatest actor of all time, Marlon Brando’s storied career has come to the define the 20th century—his seminal films serving as cornerstones of American culture over the course of six decades,” Paul Boutros, Phillips’ Head of Watches, America, said in a statement. “This Rolex GMT-Master is the holy grail of watches owned by Marlon Brando and one of the great ‘long lost’ watches to finally surface after years of speculation.”

In the Palme d’Or-winning film, Brando plays Colonel Walter E. Kurtz, a renegade Green Beret who’s started an army of his own in Cambodia and who Martin Sheen’s Captain Benjamin L. Willard has been sent to assassinate. During the notoriously troubled production of the movie—during which the actor reportedly showed up for filming overweight and completely unprepared for his role—Brando was said to have been told to remove his Rolex, but refused, saying, “If they’re looking at my watch, then I’m not doing my job as an actor,” though he did remove the watch’s bezel.

Scheduled for December 10 in New York, Game Changers other lots will consist of iconic timepieces owned by “extraordinary” people considered “game changers” in their fields. Another watch set to go up for sale is legendary golfer Jack Nicklaus’s Rolex Day-Date. While the auction house did not offer an estimate for Brando’s GMT-Master, it sold Paul Newman’s Rolex Daytona for $17,752,500 in 2017, and followed that sale by auctioning Elvis Presley’s white gold and diamond Omega for $1.8 million in 2018.