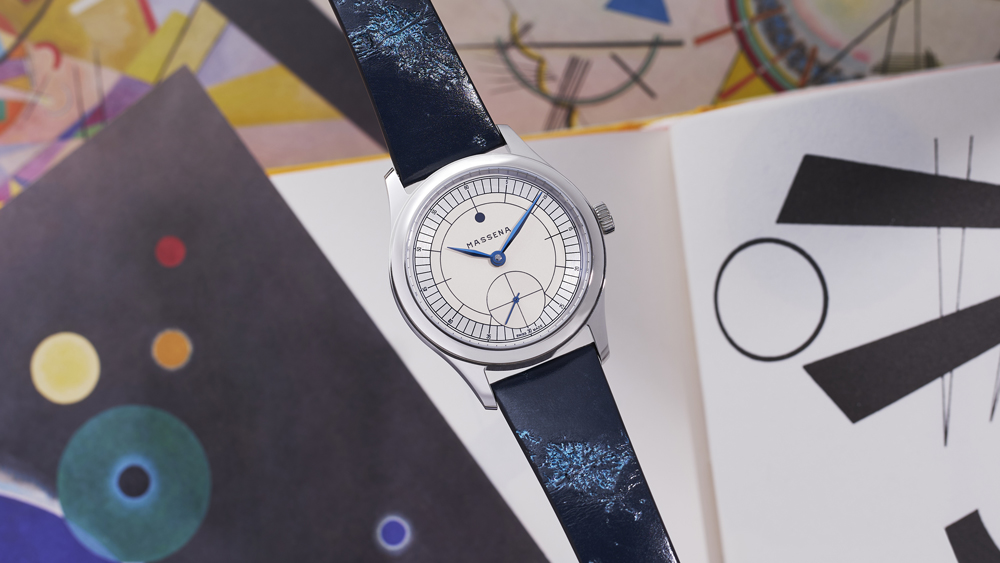 Since its founding in 2018, Massena LAB, the watchmaking studio created by industry veteran William Massena, has released 25 watches, 18 of them in collaboration with independent watchmakers with a knack for taking elements of vintage design and using them to create original contemporary timepieces.

Today, with the introduction of its newest watch, the Magraph by Massena LAB and Raúl Pagès, the brand is embarking on a new chapter. For the first time, a Massena LAB watch is equipped with its own proprietary movement, in this case, the M660, designed and developed in Switzerland under the supervision of the independent Spanish watchmaker Raúl Pagès.

And unlike Pagès’s highly limited timepieces, which cost upwards of $80,000, this one is available for about a tenth of the price.

To explain his business model, Massena drew an analogy to the high-end restaurant business, comparing his 2021 collaboration with the independent watchmaker Luca Soprana, with whom he created a limited edition of 11 pieces, each priced around $40,000, with the new Magraph.

“You know you can go to Daniel and it’s $1,000 per head and then you have Daniel Lite—it’s not Daniel, he didn’t make the watch himself, but he supervised it,” Massena tells Robb Report. “Last year we did the real chef thing—we only made 11 watches and they were $40,000 a pop. This time, Pagès supervised it, he designed it, and it’s five times cheaper: $8,675.”

The watch’s affordability, however, shouldn’t overshadow the effort that went into making it. “It’s a very ambitious project,” says Massena. “We wanted to have our own movement, something that was ‘affordable’ for the beginning collector, and we had Raúl help us design it. The goal was to make a watch below $10,000 and to make it a fun movement where you have all the different aspects of hand finishing.

“It’s based on the Valjoux 7750, but Raúl made the design to our specs,” Massena adds. “We had a company do all the CNC cuts; we had parts made industrially and we had people hand-finish it and Raúl supervised all of it.”

Available in a limited edition of 99 pieces, the Magraph is a throwback to the 1930s. The inspiration for the graphic Bauhaus-era dial design was a timepiece Patek Philippe made for a retailer in Berlin in 1935. “It’s a very obscure piece,” Massena says. “The watch sold at auction for $200,000 about 15 years ago, and I liked it.

“And Raúl also has that kind of design taste,” he adds. “He likes Corbusier, simple clean lines, so we kind of clicked on this.”

Impressed by Pagès’s talent as a watch restorer (the Spaniard cut his teeth working in Parmigiani’s restoration department, and then landed a restoring gig at the Patek Philippe Museum in Geneva), Massena approached him about three years ago.

“He liked the idea of creating something for watch collectors who could not afford the expensive stuff,” Massena says.

And therein lies the throughline connecting virtually all of Massena LAB’s timepieces: “The idea is: Bring artisanal talented watchmakers forward and have them show what they’re capable of,” Massena says. “Also, try to make it as affordable as possible, for people who don’t have access to that type of product.”

The formula seems to be working. Every single timepiece Massena LAB has introduced has sold out—sometimes, as was the case with a monopusher chronograph and perpetual calendar created with Habring, within minutes.

Not that Massena is thrilled about the brand’s unavailability. “Without humble bragging here, I’d like the ability to sell watches on a daily basis,” he says. “But that’s the nature of the business now.”

He should know. A collector, consultant and former auctioneer, Massena has been an astute observer of the watch business for decades. To explain the current mania for luxury timepieces, including his own, he cited the advent of digital shopping tools — such as Shopify and PayPal — that have made it easy for consumers to conduct transactions online

“Then you have, finally, watchmakers that are slowly getting to the internet, and then lastly, Covid shows up and people start to think watches are an investment and they’ll be rich with watches,” he says. “And all of a sudden you have a company that tries to launch a watch and is overwhelmed with demand. Obviously, not every company, but certainly Patek, Rolex, Journe.”

Massena cites the new white gold successor to the Patek Philippe Nautilus Ref. 5711 as a prime example of the mania. “I have a very different clientele,” he says. “Mine has the Nautilus, but didn’t buy it yesterday; they bought it 20 years ago. Another part of my clientele doesn’t care about the Nautilus—they want something much more affordable, but also more fun and more original.”