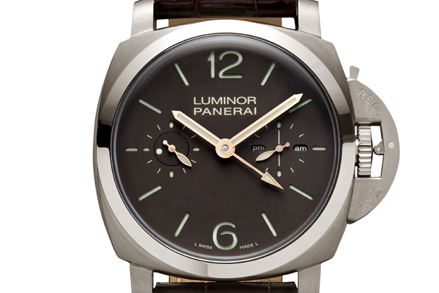 Panerai’s caliber P.2005 is a new take on an old concept. But that doesn’t mean that the latest timepiece to house the caliber, the Luminor 1950 Titanium Tourbillon GMT, is any sort of copycat. The P.2005 uses an earlier version’s three-barrel configuration to create a six- day power reserve?even as it now powers a vertically rotating tourbillon?and for the first time the timepiece is offered in titanium. The back of the watch features a large sapphire crystal window, which reveals the entire manual winding movement, and sits along an alligator strap with a titanium buckle. The Italy-based company produced only 150 of the $122,000 watches for 2008. (www.panerai.com)