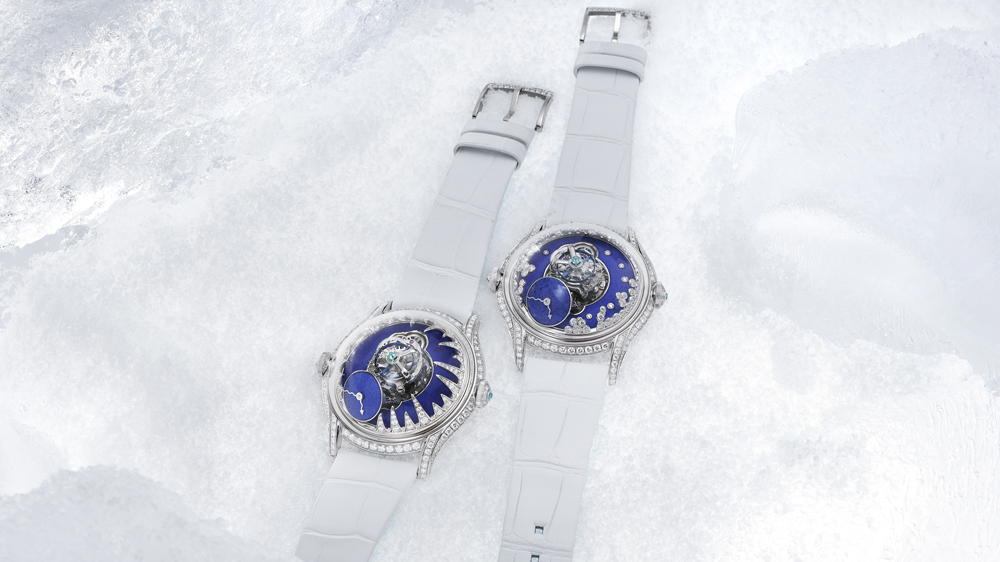 Calling all ice queens! Temperatures may be dropping but MB&F is turning up the heat with a pair of iced-out LMFlyingT watches inspired by winter, each limited to eight pieces. The watches were created in partnership with ultra-exclusive French jeweler, Emmanuel Tarpin.

For MB&F (which stands for Max Büsser & Friends), collaborating is part of the company’s DNA. Last year, founder Büsser teamed up with Fabrizio Buonamassa Stigliani, Bulgari’s product creation executive director, to dress up the LMFlyingT—MB&F’s first and only model for women—and the brand is known for creating timepieces with other watchmakers like Kari Voutilainen to designers such as Eric Giroud.

For Tarpin, however, it was uncharted territory. “I don’t really do collaborations because I prefer to focus on my own work,” Tarpin tells Robb Report. “I do one-of-a-kind appointments, so it’s this idea of a private and discreet way of working.” But when Büsser reached out via LinkedIn, Tarpin remembered meeting the watchmaker when he was in school at Geneva’s Haute École d’Art et de Design where Büsser had come to give a lecture about his creative process and his brand. It was a connection that ultimately sold him on the project. “I loved when I talked with Max because there was something very simple and very easy,” says Tarpin. “He told me about this project and I said, ‘Oh that could be interesting but I don’t really know that much about watches.'” But his fresh perspective is perhaps exactly why the pairing of Büsser and Tarpin’s creative minds turned out not one but two stunning creations.

Tarpin started with winter, a theme seen often enough in jewelry, but the combination of his interpretation of the perennial motif in Büsser’s voluminous and out-of-the-box FlyingT is pure magic. “I wanted to do two propositions but quite linked, with one which is more poetic with the idea of a snow globe with the diamonds [the Blizzard model] coming up a bit and the other one [the Ice model] more aggressive with stalagmites,” says Tarpin. Both feature diamonds rising up beneath the FlyingT’s bubble shaped sapphire crystal glass and hovering over a matte lapis dial—a juxtaposition that Tarpin felt offset the shininess of the diamonds.

“With his help we created this incredible micro-casting and setting of diamonds which gives you the impression that the diamonds are actually glued on but it’s actually the whole structure in gold which is holding up every diamond following the curve,” Büsser told Robb Report.

Other elements that set these new versions of the LMFlyingT apart from earlier iterations is that Tarpin requested the removal the yellow and red-gold elements of the movement, visible in the center of the lapis dial, as to not clash with the white gold case and the ice-like diamond structures. “He didn’t want them which I can understand because it just didn’t work,” says Büsser. “So, we have to redo all the wheels and you know in watchmaking this is like a nightmare.” But it’s also proof that both Büsser and Tarpin are committed to the excellence of the finished product and design. The balance wheel was also blued and the diamonds formerly set in the center of the tourbillon were removed. Rare turquoise Paraiba stones have taken their place on the tourbillons of each model and on their two crowns to further drive home the wintery wonderlands.

For fans of the MB&F LMFlyingT that haven’t been able to get their hands on previous models, this will be a no-brainer. For both admirers and newfound enthusiasts of Emmanuel Tarpin this will be a very rare opportunity to own a piece of his work. Tarpin only takes on clients with whom he has developed a rapport, working on very select and very few one-of-a-kind pieces each year. These will be true prized collectors pieces for any well-curated vault. Each retails for $170,000.