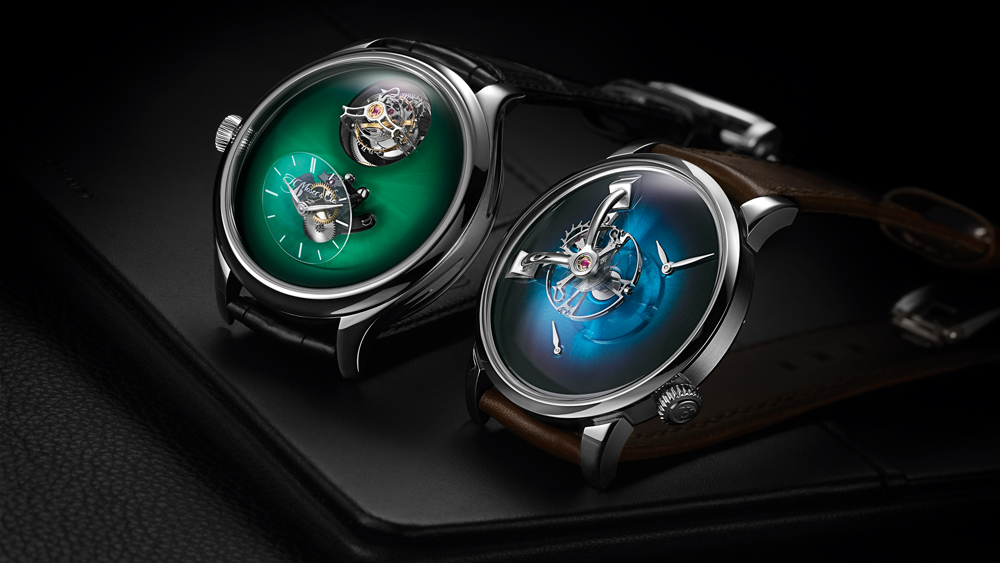 Upon meeting Edouard Meylan of H. Moser & Cie and Maximilian Büsser of MB&F—both CEOs of their respective brands—the stereotype of the overbearing visionary leader falls away to reveal two of watchmaking’s most affable and collaborative people. While these two men and their companies have had relations going back a decade through hairspring manufacturing partnerships, their new collaboration represents a wide-open two-way exchange of aesthetics, concepts, and mechanical prowess that has resulted in two limited editions that blend both brand’s avant-garde tendencies with uncanny ease.

Both Meylan and Büsser have had long and robust experiences in the watch industry. Meylan’s father led Audemars Piguet for 20 plus years while his sons absorbed deep insider-knowledge of the watch industry. Büsser took a job at Jaeger-LeCoultre straight out of school and was then made CEO of Harry Winston at just 31-years-old; he left that position to start MB&F in 2005. Both men bring daring aesthetics and high concepts to the table, yet are seasoned enough to understand the practical compromises necessary in turning outlandish horological ideas into realities.

Though the two resulting watches differ vastly in their horological goals and accomplishments, when seen together it’s clear that these two timepieces are deeply related. Obviously Moser’s fumé dials, the high-dome crystals, traditional round cases, and selective exposure of mechanical parts tie these watches together, but there are more subtle similarities as well. Both watches show off very sophisticated hairsprings, which are custom produced at Moser’s affiliate company Precision Engineering AG. Beyond mere skeletonization, this is micro-architectural avant-gardism, with unique structures emerging to support and spotlight the most active component in the movement. The result is two totally different watches which ask us to meditate on the beating heart of the mechanism.

The Legacy Machine suspends the balance spring above the center of the dial by way of two futuristic, sculptural arms, but despite that wild configuration The Legacy Machine’s traditional round case provides a natural environment for Moser’s fumé dials. Importantly, MB&F has replaced the Legacy Machine’s domed subdials with more traditional dial-mounted hands, for hours and minutes and a power reserve indicator, that concede just enough of Moser’s aesthetic to successfully bridge the gap between these brands. The arcing arms that hold dual matched balance springs are configured to reduce torque differentials and friction for improved precision and isochronism.

MB&F’s movement was created in conjunction with renowned watchmaker Kari Voutilainen, but here is updated with black NAC coating that lends the movement a contemporary visage. The bridges are especially handsome and masculine in black, while the movement’s pedigree remains at the highest level. Given the watch’s domed crystal, wearing the 40mm LM101 MB&F X H. Moser is surprisingly comfortable. The fit is traditional, and the domed crystal doesn’t interfere with even the tightest of cuffs (I got it under a Brunello Cucinelli tunnel cuff with little fuss). While legibility is rarely a concern for such avant-garde timelieces, the LM101 MB&F X H. Moser offers at-a-glance time telling that (combined with the comfortable fit) makes it a rather practical everyday watch.

Not content to simply let MB&F riff on Moser’s aesthetic, Edouard Meylan insisted that this collaboration be a two-way street. The resulting second watch is the Endeavour Cylindrical Tourbillon H. Moser x MB&F ($79,000). At 42mm and with a total height of 19.5mm, this model isn’t quite as wearable as the LM101 MB&F x Moser model, but under that high-domed crystal is a unique horological world that buzzes with the clever, yet tasteful, innovation that has set the reinvigorated Moser & Cie. apart since 2013.

From many angles, the sapphire dial of the H. Moser x MB&F Endeavour Cylindrical Tourbillon nearly disappears, leaving the tourbillon and beautiful main dial to dominate beneath the domed crystal.  Allen Farmelo

The exposed one-minute tourbillon at 12-o’clock employs a cylindrical balance spring, the same Precision Engineering AG unit in MB&F’s LM Thunderdome watch. Dating to the 18th century, the cylindrical balance spring has a corkscrew structure that helped improve marine chronometers during the age of naval colonization. Breguet overcoil ends to the spring reduce friction and thus improve isochronism. As the tourbillon makes its one-minute revolution, the mechanism rises above the dial to compliment the raised sapphire time-telling dial.

That dial is illusive, but purposefully so. Made of sapphire and including Moser’s script logo, the 40-degree lean-angle provides excellent legibility for the person wearing the watch, but off-axis the dial enters a play of light and shadow that adds intrigue and unexpected beauty. At one angle you might catch the ghostly shadow of the angled time indicating dial on the fumé dial, and at another angle you might not see the dial at all, revealing instead the Funky Blue, Cosmic Green, Burgundy, Off-White or Ice Blue fumé finish in full splendor. Mounted directly to an exposed conical gear train, and thus providing uninterrupted torque transmission, the transparent time-telling dial repeatedly gives visual access to essential parts of the motion works. This configuration challenges our notions of skelentonization, while also asking us to consider specific sections of the movement individually. The rear window tells a fuller mechanical story in the gorgeously decorated in-house auto-winding movement.

For those already familiar with MB&F’s collaborations, this venture provides a new take on the exchange because we see both teams working together to do their own watch. Serious collectors of both MB&F and Moser timepieces are likely going to want one of each, and as there are only 30 in total to be made in steel, we imagine they’ll go fast.