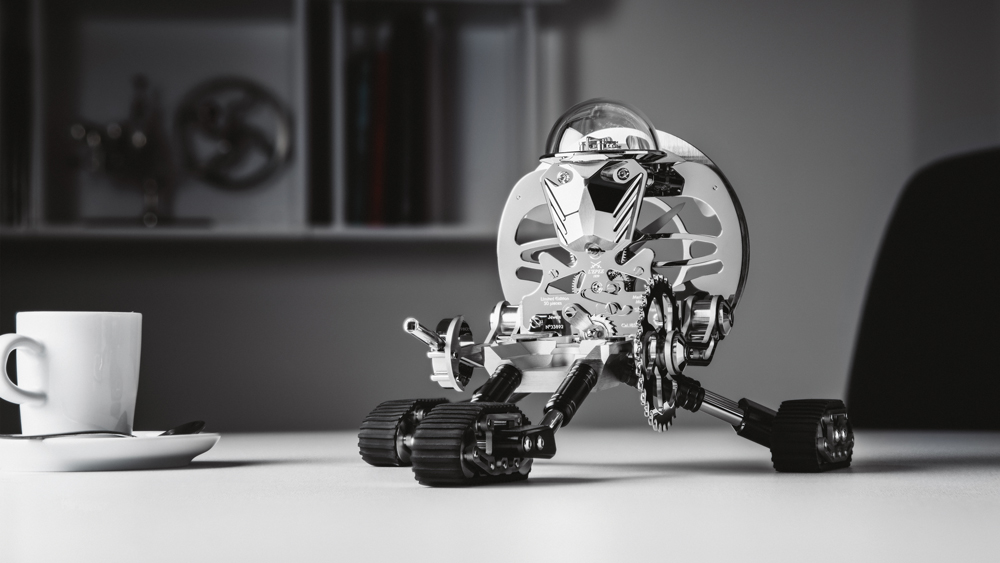 MB&F and L’Epée are at it again. The watchmaker and clockmaker have teamed up again for their latest wild table clock creation, Grant. The roving machine is described by the duo as “Grendizer meets Mad Max meets Transformer.” Known for his robot-inspired designs, MB&F’s Max Büsser’s latest android wears a time display on its circular shield—representing the fight against the speed of time. In fact, Grant is on a mission to slow down time. It features no seconds hand and moves slowly on its WALL-E-like rubber tracks meant to travel across “rough” terrain or piled up desks. Think of Grant as a transformer toy—a clock meant to remind you to take a time out of your busy day. Or to encourage you to procrastinate a bit.

To that end, Grant comes equipped with a “grenade launcher” on its left side, directly across from its spinning disk on the right. This removable feature actually doubles as the clock’s winding and time-setting key for its 8-day power reserve, ensuring the robot doesn’t run out of time. The manufacture movement that ensures this level of power features the same superior decorative treatments as high-end wristwatches including Côtes de Genève hand finishing, anglage, polishing, sandblasting, and circular and vertical satin finishing. It takes incredible effort to do this kind of finishing by hand on a small wristwatch, and on a clock of this surface (166 mm tall x 212 mm wide x 238 mm deep in its vertical position) is even more difficult.

But its visual appeal goes far beyond its decorative elements as Grant can transform into three different positions: lying horizontally over its chassis at its lowest profile, crouching at a 45 degree angle, or sitting up at 90 degrees. Morevoer, all of its gears are fully on display so that the mechanics of the timepiece can be fully appreciated, while it’s “belly button” or glass-domed piece reveals the regulator action. The regulator also includes Incablock shock protection, a common feature in wristwatches but a rarity in clocks which are typically stationary.

Grant (22,000 CHF or $22,665 at current exchange) is made of stainless steel and nickel-plated and palladium-plated brass with a mineral glass domed “head” and is comprised of 268 components. It is limited to just 50 pieces each in nickel, black, and blue versions.