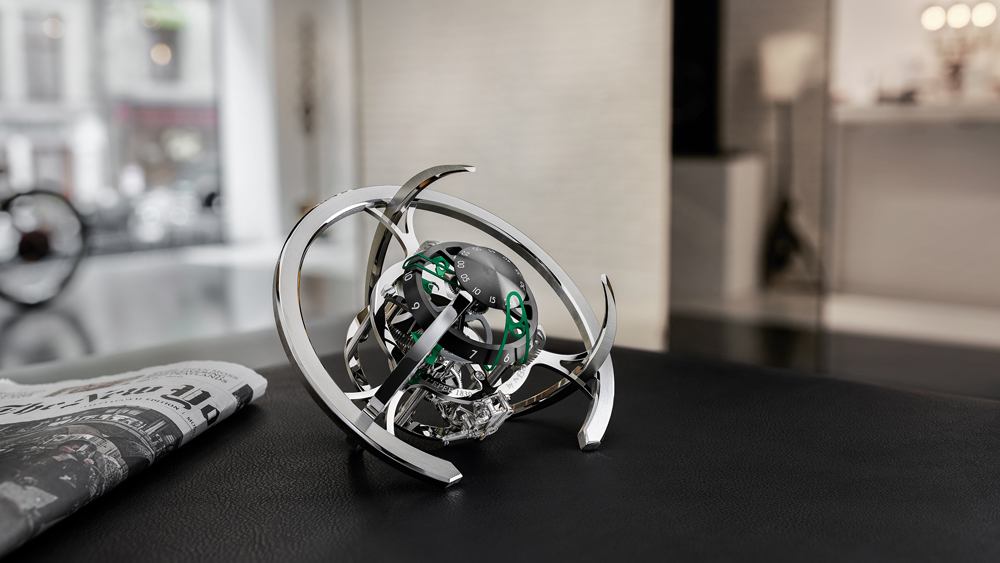 Are desk clocks poised for a comeback? Vintage dealers are already starting to talk about a resurgence in pocket watch collecting and Christie’s is hosting an upcoming auction of Cartier desk clocks in June, but MB&F and L’Epée’s version is a wildly futuristic take on old-school timekeepers. The new Starfleet Explorer desk clock is an updated version of the first collaboration between MB&F and L’Epée six years ago, now in smaller dimensions of 16.5 cm wide and 11 cm tall.

Poised for liftoff, the spaceship-inspired steel clock with hand-lacquered accents perches on your work station with c-shaped “legs.” In the center of the spacecraft, three smaller animated space explorers orbit two disc indicators that tell the time, every five minutes.

The in-house movement that powers MB&F’s latest machine for 8 days is manually wound with a double-ended key, which is also used for setting the time. Aiding in the winding and setting is another cool design feature—the structure can rest on both ends of its “legs” or “vertical landing gear,” as the brand refers to it, which makes it easier to access the point where the clock is adjusted.

Either way it’s positioned, you will get a good view of the expert finishing on the structure, which actually takes longer on a sizable desk clock than a wristwatch due to the increase in surface area. And for good measure, it also comes with an Incabloc shock protection system, so that your mothership can safely travel with you, when the time is right, to any location your heart desires. In the meantime, you can space out on the object at your desk and dream of a life beyond this realm.