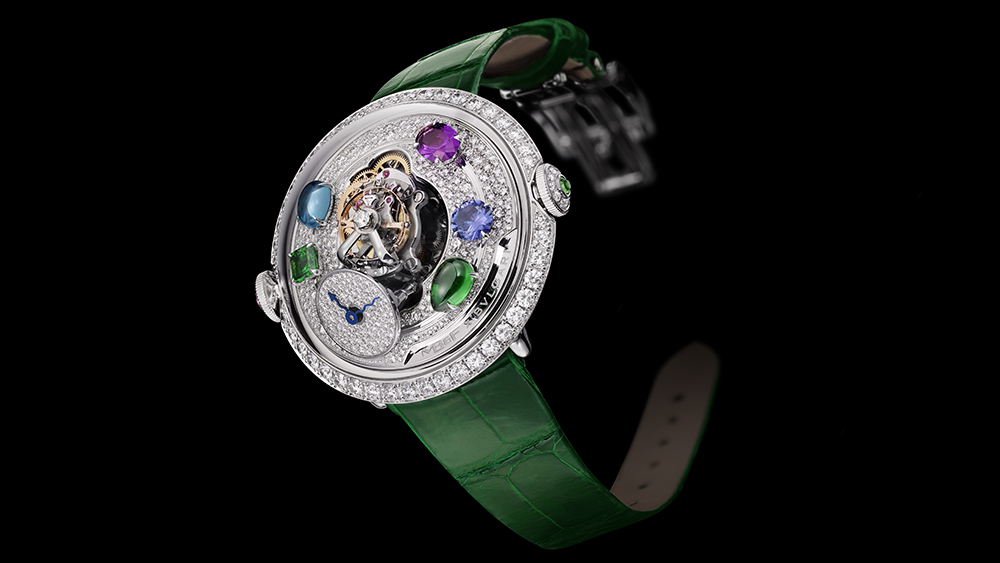 MB&F founder Max Büsser is leaning into his female clientele. Back in 2018, during a sneak peek of his first ladies’ watch, the LM FlyingT, he admitted to Robb Report that he was unsure of his ability to design for women. “Men don’t understand women,” he said, “so I thought, ‘How am I going to do this?’ ”That may sound like an antiquated notion of gender norms, but the watch itself was anything but conventional. Its futuristic design was unlike anything on the market and proved to be such a hit the company has since launched seven versions. The eighth, a collaboration with Bulgari that debuts at the end of November, may be its biggest headliner yet.

The joint design was born out of a friendship between Büsser and Fabrizio Buonamassa Stigliani, Bulgari’s creative director of watches. Both have a penchant for bucking tradition and are known for housing extraordinarily inventive mechanics in out-of-the-box designs. The new 39 mm-by-20 mm LM FlyingT Allegra uses the same vertically built 3-D movement (it features a flying tourbillon on the upper end of the axis) and space-age domed case design as the original but now comes decked out in Italian opulence. A system of large, colorful gems orbit the tourbillon, all set within a galaxy of diamonds covering the mainplate; the combination of stones—which include tsavorite, topaz, amethyst, tanzanite, rubellite and tourmaline—varies depending on whether you opt for the 18-karat white-gold or rose-gold case.

In addition to the case, buckle and crown, the offset dial is likewise decked in diamonds, and the fact that it’s positioned at a 50-degree angle, so that only the wearer can read the time, is perhaps the only discreet feature of the new FlyingT. The crowning touch: a presentation case that displays the timepiece in an aluminum orb encircled by a large, waterjet-cut metal ring; when dramatically tilted on a desk or dresser, it has the effect of a Saturn-like planet from some ultra-luxe universe far, far away. With the LM FlyingT priced at $185,000 and just 20 pieces made in each case material, it’s a fitting home for a rare piece of watchmaking from two of the most relentlessly creative minds in the business.