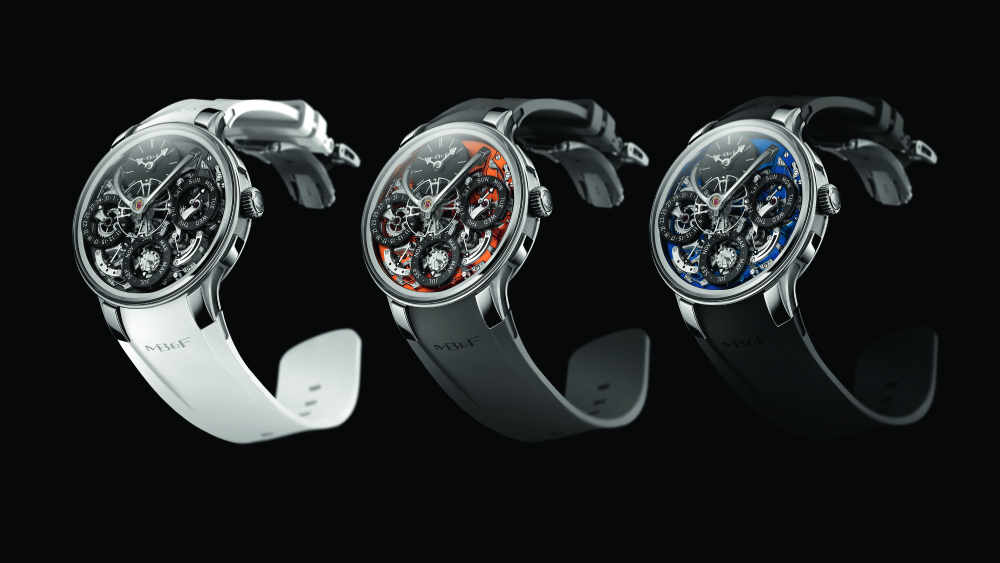 MB&F’s coveted timepieces have transported us everywhere, from the depths of the ocean to the furthest reaches of outer space through their innovative designs. With its latest release, the Swiss watchmaker relinquishes its role as navigator and entrusts that position to someone unexpected: the wearer.

The Legacy Machine Perpetual EVO is an athletic, limited-edition update released to celebrate the firm’s 15th anniversary, and combines some of its most novel materials and technologies so that it can go anywhere you do. The resulting piece leans more toward haute horology than a traditional sport watch—and that’s what sets it apart.

Composed to achieve maximum clarity and legibility, it is constructed with a 44mm zirconium case with sapphire crystal across the face and case back. The silver-gray metal is rarely used in traditional fabrication––MB&F has only employed it in two prior models––as the dust created when milling it can be combustible. However, it is lighter than steel and stronger than titanium while also having hypoallergenic and anti-microbial properties that make that complicated process worth overcoming.

The elements are all more or less intact from the 2015 edition, but the new version is bezel-less, allowing for the domed crystal to be fused directly to the case (which is water-resistant to 80 meters). This creates an open look and clarity rarely found in watches of this caliber. Indeed, the detailed perpetual calendar, one of the most impressive components of this new update, is easier than ever to read.

Originally devised by Stephen McDonnell and debuted in 2015, the hand-wound LM Perpetual Engine remains a marvel of engineering. Where most traditional perpetual calendars are designed to assume every month has 31 days, skipping ahead for shorter months, this version assumes every month has at least 28 days, adding extra days as required. The shift may seem minor, but it allows owners to avoid unintentionally damaging the mechanism (and costly repairs) if they try to manipulate or adjust the date during changeover.

And, because this model is meant to do more than simply look nice, it is built with a FlexRing shock projection system––an annular dampener fitted between the case and movement to provide shock protection along the vertical and lateral axes. Adding to its overall sporty feel is the choice of practical rubber strap that comes in both white and black.

This model is built with an innovative perpetual calendar.  Courtesy of MB&F

The MB&F Legacy Machine Perpetual EVO is available with either a blue, orange or black movement, with each limited to a production run of just 15. It’s available online for $167,000.