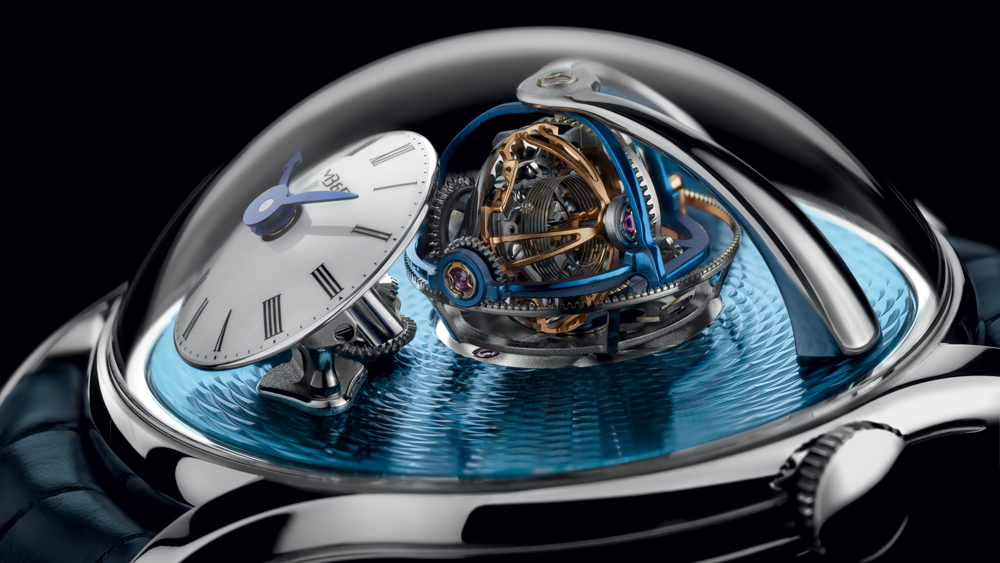 For this masterpiece, MB&F’s Max Büsser tapped two of the world’s most renowned watchmakers—Eric Coudray, known for creating wild and complex mechanisms and Kari Voutilainen, a top-tier collector’s darling who creates exceptional timepieces under his own name—with the directive to create “the craziest, most cinematic three-axis tourbillon ever.” Working together for the first time, the pair created a spherical tourbillon complication with three axes revolving at different speeds, on different planes, in a record-breaking 8 seconds for the innermost structure, 12 seconds for the middle cage and 20 seconds for the outer cage. The proprietary TriAx mechanism, the world’s fastest triple-axis regulating system, rises like a tornado above a light-blue guilloche dial plate in a whirlwind of caged gears and pinions. The new timepiece is a masterful follow-up to the MB&F’s incredible Legacy Machine FlyingT for women, which won Women’s Timepiece of the Year in Robb Report’s 2019 Best of the Best awards.

While he isn’t known to the larger public, since he typically creates movements behind-the-scenes for big-name brands, Coudray is considered a rock star in the watchmaking world. He’s the man behind Jaeger-LeCoultre’s first spherical dual-axis Gyrotourbillon, introduced in 2004—the latest version was another timepiece included in Robb Report’s Best of the Best awards this year. The concept for the Gyrotourbillon, according to Coudray, was inspired by another watchmaking genius, Anthony Randall, a protégé of the late master of time, George Daniels. “It’s not exactly the same, but it’s a similar idea with the same philosophy,” Coudray told Robb Report. “I thought it would be great to transpose this to a wristwatch, but I thought it would be too big. But they [Jaeger-LeCoultre] told me they would create a box around it, and that’s how it happened.”

That invention, released in 2004, was the early precursor to the Thunderdome’s triple-axis tourbillon. It was a natural collaboration for Coudray and Büsser—their professional relationship began at Jaeger-LeCoultre when Büsser worked in sales and marketing and Coudray in watchmaking. Ultimately, it took Coudray 15 years to develop the dual-axis Gyrotourbillon at Jaeger-LeCoultre, but the idea for the mechanism came to him as far back as the mid-80s, when he was still in watchmaking school, meaning it took nearly 20 years to come to fruition. (Franck Muller was the first to release a dual-axis tourbillon, a year before Coudray, but both were working on its development at the same time.)

The Thunderdome’s TriAx Tourbillon in profile.

Meanwhile, Voutilainen lent his high-level expertise in finishing, not just in the aesthetics, but also on the movement—the shape of the bridges, ratchet wheels and general layout visible from the back of the watch. He also created the guilloché pattern on the plate sitting just beneath the movement and the off-center, tilted dial. Voutilainen’s refined techniques lend an elegance to Coudray’s wild mechanical creation—a process that reportedly required “countless sessions” between the two watchmakers.

MB&F already has a cult following among collectors, but blending Büsser’s imagination with two watchmaking prodigies put the already inventive construction (debuted in the LM FlyingT as mentioned above) of this timepiece on a whole new level. Collectors that do get their hands on this 44 mm x 22.2 mm piece of history should feel inclined to hang onto it as an heirloom.

The $280,000 Legacy Machine Thunderdome is limited to 33 pieces in platinum 950 with a light-blue guilloché dial. Versions in Tantalum (five with a dark blue dial and five with an Aventurine dial) will be delivered to The Hour Glass in Southeast Asia with a price set by the retailer according to local currency.