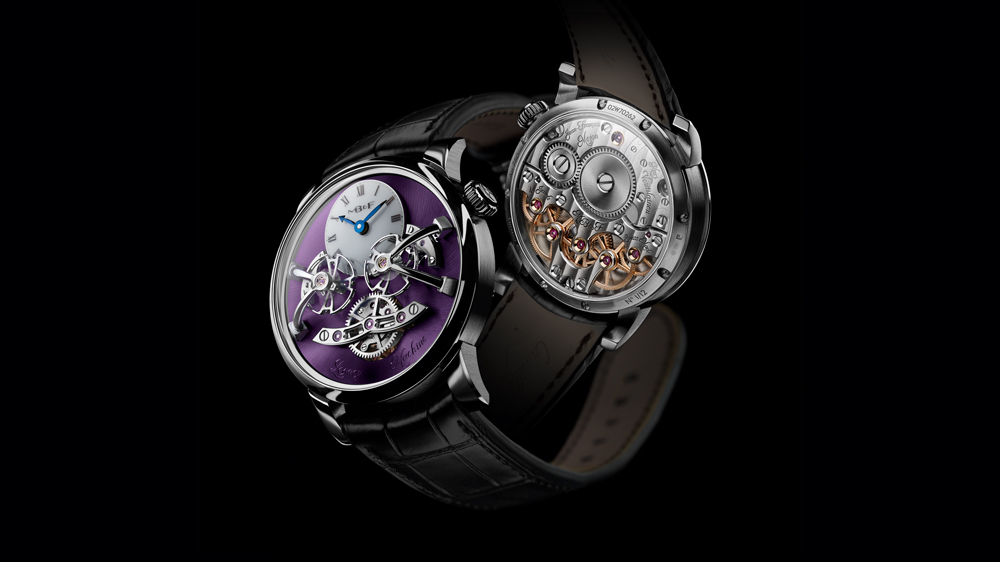 When watchmaker Max Büsser of MB&F (Max Büsser and Friends) decided in 2011 to add a second, more classic line to his horological machines, his first creation was the Legacy Machine No. 1—an innovative timepiece with a movement created by watchmaking stars Jean-Francois Mojon and Kari Voutilanien that would effectively put MB&F on the map as one of watchmaking’s most exciting new independents. The watch made history as the first-ever timepiece to win two top awards at the prestigious Grand Prix d’Horlogerie de Genève the following year for the Public Choice Prize and the Best Men’s Watch of 2012.

The watch boasted a 14 mm flying balance wheel, a vertical power reserve indicator, and independent dual time zone functions. The Legacy Machine No. 2 was released the following year and featured two flying balance wheels suspended over the dial by arcing arms and a planetary differential (a function which keeps the axles and pinions of the watch running smoothly). The watch—which comes in 18-karat red gold, 18-karat white gold, platinum, and grade 5 titanium—is now being offered in 18-karat white gold with a purple dial that is limited to just 12 pieces. Purple is not a common color choice for watch dials, but the hue magnificently highlights this timepiece’s innovative watchmaking in a way that collectors of independent watchmaking, looking for something outside of the norm, will appreciate. It’s not the first time MB&F has used the color on a Legacy Machine; its Legacy Machine Perpetual, released in 2016 and featured in Robb Report’s Best of the Best list the same year, was also produced in 18-karat white gold with a purple sun-ray dial in a limited run of 25 pieces.

The Legacy Perpetual has significantly more functions on the dial, which only allowed for hints of its purple hue, but the architecture of the Legacy Machine No. 2 allows for the color to stand out on the 44 mm timepiece. MB&F’s timepieces are not for the collector that seeks subtlety, after all.

Hovering above the futuristic dial is an ode to historical watchmaking’s greats created by its current masters. The timepiece is a tribute to dual regulator watches created with two balances first conceived, sans modern machinery to the glow of candlelight, by 18th-century watchmakers like Abraham Louis-Breguet, Ferdinand Berthoud, and Antide Janvier. A modern-day genius also served to inspired the LM2—Philippe Dufour, creator of the first wristwatch to contain dual regulators and a differential.