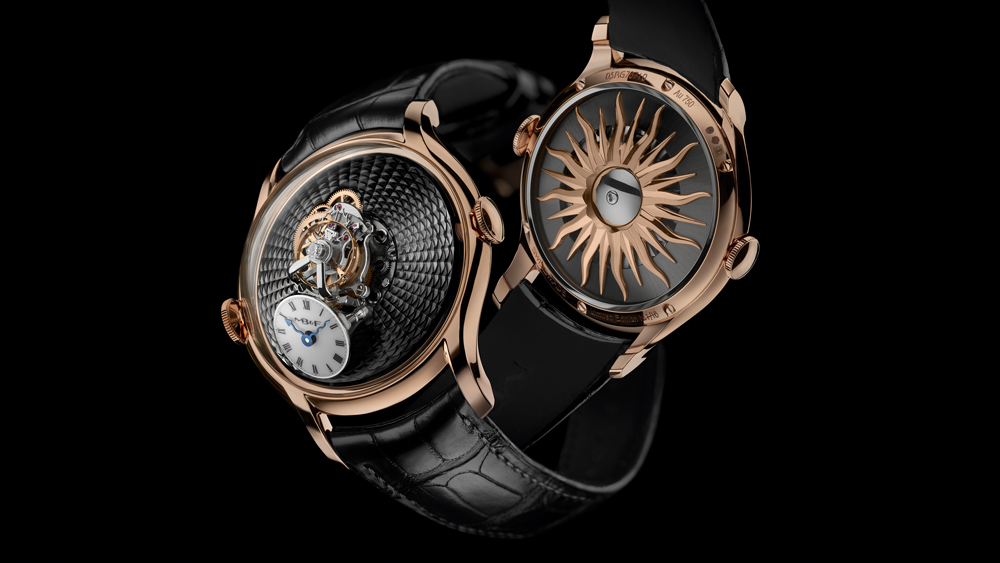 When MB&F unveiled the Legacy Machine FlyingT, its first ladies’ timepiece, last spring, founder Maximilian Büsser wasn’t sure the model would be a success. “Men don’t understand women, so I thought, ‘How am I going to do this?’” he told Robb Report in March 2019.

To say the watch was well-received is an understatement. It went on to win the Prix de la Complication pour Dame—best women’s complication watch—at the 2019 Grand Prix d’Horlogerie de Genève, watchmaking’s answer to the Oscars, and became MB&F’s best-selling machine of 2019.

Originally presented in three diamond-set white gold editions, the Legacy Machine FlyingT is now available sans ice in either red gold or platinum. Limited to just 18 pieces each, the LM FlyingT Red Gold and Platinum editions feature a guilloché dial plate handcrafted in master watchmaker Kari Voutilainen’s workshops. (The dial plate on the 18-karat red-gold case is black, while the one housed in the platinum case is sky-blue.)

Unchanged from the original LM FlyingT is the distinctive inclined white lacquer dial positioned at 7 o’clock, an intimate detail designed to allow only the wearer to tell the time.

Meanwhile, the automatic winding rotor, fashioned in the shape of a three-dimensional sun, provides 100 hours of power reserve. The feature provides power to the central column of the 60-second flying tourbillon. At the top of the device’s cage sits a single diamond that rotates simultaneously with the flying tourbillon.

Although the red gold and platinum editions, which retail for $105,000 and $116,000, respectively, have been on the market for less than a week, some have already been spoken for.

“Interestingly, the first two non-diamond set pieces to be sold at launch this week were bought by important male collectors who had been waiting for those versions to come out,” Büsser says. “The unique guilloché base plate by one of the greatest master-watchmakers today, Kari Voutilainen, brings an incredible additional depth to what was already a very 3-D piece of kinetic art.”