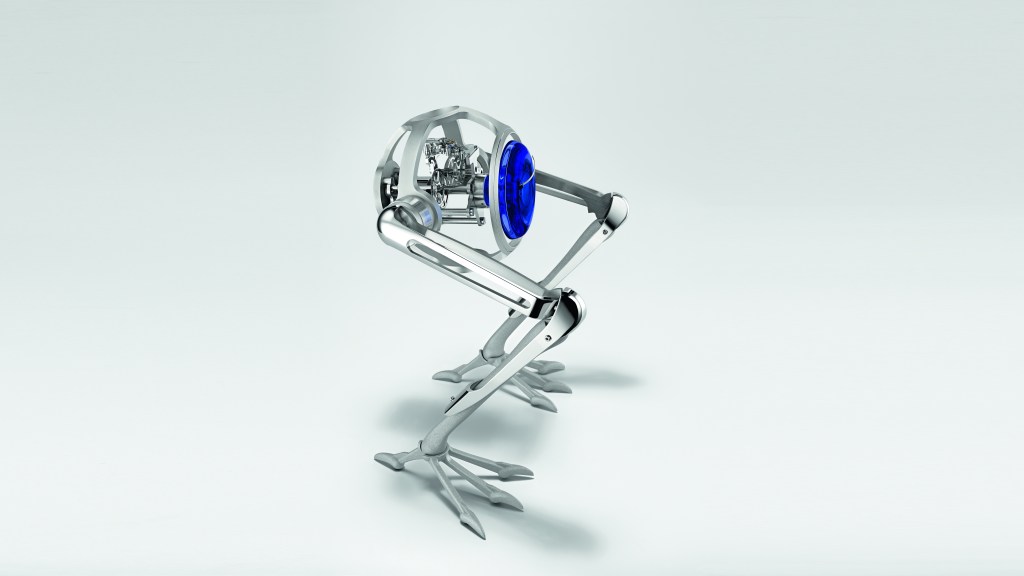 If you happened to glance at MB&F founder Max Büsser’s Instagram stories in late August, you might have caught a glimpse of a bright blue Christmas ornament perched atop a pair of scrawny chicken feet. For years, the goofy bauble sat on Büsser’s desk.

“When young and very talented Maximilian Maertens started his design internship with us just out of the ECAL school of design two years ago, I gave him that art piece asking him to turn it into a ‘dinosaur clock,’” Büsser recalls. “The legs being the dinosaur and the central body the clock. It took him a while to find the right direction—initially too organic, then too robotic—but at some point, he struck it just right as far as I am concerned. The result is probably my absolute favorite co-creation.”

Dubbed “T-Rex,” the clock marks the 11th time since 2014 that the brand has joined forces with L’Epée 1839 on a table clock that combines Büsser’s obsession with toys, many nostalgic throwbacks to his 1970s childhood, with the classic movement-making skills of Switzerland’s premier clockmaker.

“It seems to me I have been creating clocks for L’Epée for as long as I remember!” Büsser says. “It is a little mindboggling to realize that they have all come to life in less than six years. It is also a testimony to the incredible team at L’Epée, who not only have welcomed some of my wildest ideas, they have transformed them into real ticking works of art.”

The “T-Rex” clock was preceded by the one-off “Tom & T-Rex” table clock the longtime collaborators created for this year’s Only Watch auction, a unique piece that was unveiled in July. Now available in three limited editions of 100 pieces each in deep blue, green or red, the nearly 12-inch-high clock contains more than 200 components crafted from palladium-plated brass, bronze, stainless steel and, on the dial, hand-blown artisanal colored glass from the Venetian island of Murano.

The in-house eight-day power reserve movement resides in an open sphere suspended between the dinosaur’s legs. T-Rex retails for $24,525.