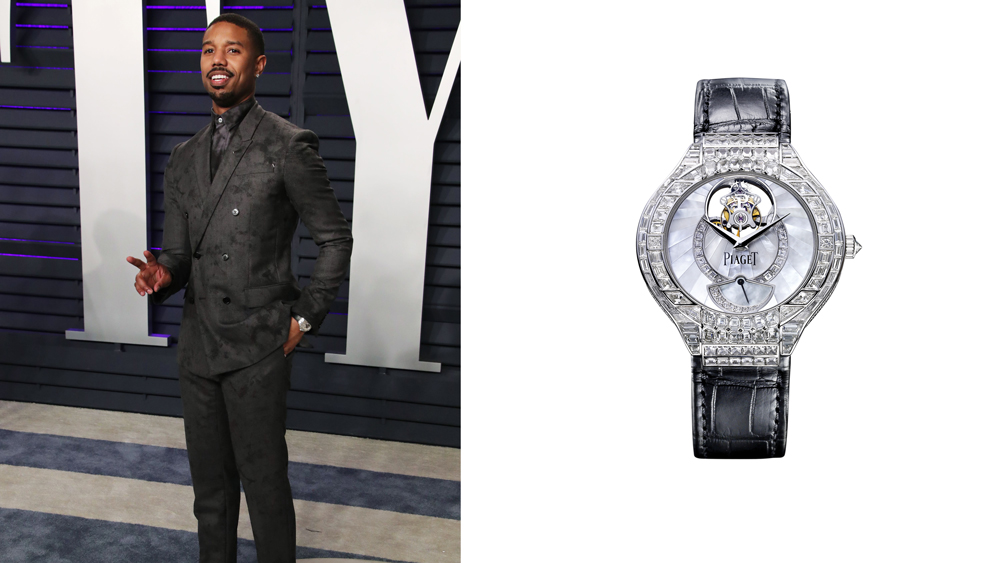 At Sunday’s 91st Academy Awards, there were plenty of high-end Swiss watches that graced the red carpet, but Michael B. Jordan’s certainly took the cake for the priciest timepiece of the whole affair. Jordan’s Piaget Polo Tourbillon stole the spotlight with its 680 diamonds of various cuts and shapes (and a whole lot of carats). He wore that piece of wrist candy with a navy velvet Tom Ford tux for the show, but slipped into a double-breasted textured and marble-patterned grey Berluti suit for Vanity Fair‘s after-party. Both looks ensured he was one of the best-dressed men of the evening, but funnily enough his Berluti suit was reminiscent of a Piaget timepiece we caught him wearing during the Salon de la Haute Horlogerie (SIHH), back in January.

There in Geneva, we caught up with the rising star about his Piaget Meteorite Altiplano timepiece—a little slice of the heavens to match his skyrocketing career—as well as his newfound love for watches, the merits of a tightly tailored suit (as exhibited by Jordan at the Oscars), and what he misses most now that his time is more precious than ever.

It’s been a huge couple of years for you. How has the meaning of time changed over these last few years?
Not having enough of it. I’ve gone from a time where I was sitting around waiting for the phone to ring to hear if I got an audition, or if I booked this, or when the next audition was coming in, to having that dramatic switch to not having enough hours in the day to get everything that I need to have done. Time management is so important.

Is there anything that you used to love that you literally have no time for now? Basketball. I love playing basketball. Actually, it hurts me a lot to even say that. It really bothers me because that was one of the few things that I could do and not think about anything. I don’t have time for it anymore and I can’t afford to twist the ankle and get hurt.

What team do you root for?
I’m a New York Knicks fan. It’s been hard for us over the years, but I’m a LeBron [James] fan so I’ve been rooting for him. I want him to end up as the best ever.

Tell me about how you first got involved with Piaget.
It was for The Independent Spirit Awards for Fruitvale Station. I was going through the film circuits for award season and I was a presenter there. I wore the watch, it was my first time wearing it on the carpet, and got a chance to meet the family, and the whole team, and it just started from there—organically over the years, I would always wear the watch, and they supported me early on in my career. I just kind of stuck with them and we kind of grew to be this family now. So it just make this much more enjoyable knowing that you have been dealing with somebody from the beginning till now and that they’re there for all the right reasons on both sides.

Do you still wear the very first watch you wore with Piaget?
I have it. I don’t wear it as much, but its definitely in the collection. But that’s the thing about watches—you can take off a new one and go throw on a old one and not lose a step.

Who will you pass yours on to one day?
I don’t have any kids now, but who knows what the future may hold—the watches will have a story to them and I think that’s pretty special.

Were you into watches at all before this partnership?
At that time, I was too broke to be into watches. It wasn’t really something I had been introduced to, but then over time, the more I had to dress up, it was something that I realized was a vital piece of fashion. It was something that I didn’t know I needed, and once I kind of saw that, I was hooked. It’s become something I’ve grown to care about over the years and I can’t go without now.

What’s the style that you gravitate towards?
It depends on where I am. I don’t like clashing, so for me if I’m doing white gold, I’m doing all white gold. If I’m doing yellow gold, I’m doing all yellow gold. I like to just match colors up. I like thinner watches sometimes for suits, or if I’m doing a red carpet maybe a little more diamonds in it—watches that grab a little bit more attention. Or sometimes it depends on if I’m going from office meetings to the gym, to going out at night, then I need a watch that I can wear throughout the day. The great thing about Piaget is they have a watch for whatever you need. It works.

Let’s talk about your style. What kind of brands do you gravitate to?
Fashion is another thing I’ve kind of grown to love over the years. I love suits. The first time I ever put on a tailor-made suit I was like, “Oh man, I’m never taking this off. I’m sleeping in it.” It just fit completely different—my confidence went through the roof.

What was your first tailor-made suit?
It was from G.Q. I can’t remember exactly who the designer was, but I remember the first time I had it on I was like, “Man, this is tight. What is this?” I wasn’t used to it being fitted—now, for me, it’s like tighter, tighter, tighter. Everything’s tighter. As far as brands go, Coach is a brand that I work with a lot. I really love their style and they’ve been evolving over the years—to be able to work with them now is definitely a pleasure, an honor of mine. Tom Ford, great suit. Givenchy, great; Louis Vuitton, another great brand. Ferragamo makes great suits. I also like A.P.C., G-Star RAW…there’s a lot of street wear brands.

Do you find that you are having to think a lot more about what you wear on the red carpet?
I can’t take credit for that, because I have a stylist directly for the red carpet, her name’s Ade Samuel. She’s awesome. So, I don’t really get nervous anymore, when it comes to what I’m wearing. Carpets are just the norm, now.

What are you wearing today?
Today is Ferragamo, Jimmy Choo shoes, and the Altiplano Meteorite watch from Piaget. This watch is so dope—the fact that this came from space…? No, literally it came from space! You can’t even make that up! And they were able to dye it, and give it this extra texture, and they sliced it and put it in this watch. This is completely badass, and it has a story to it. So, I’m rocking something that’s literally an ounce of space—it’s pretty cool.