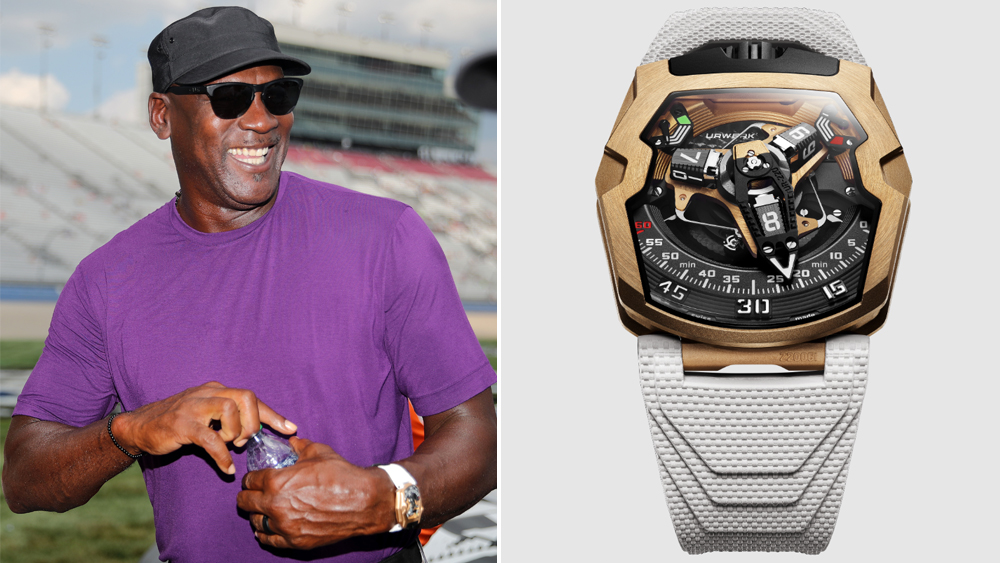 Championship rings and gold hoops aren’t the only accessories that Michael Jordan has collected over the years. He’s got a thing for watches, too.

The NBA legend and NASCAR team owner showed off the latest addition to his collection, an Urwerk UR-220 RG, at last weekend’s Ally 400 race at the Nashville Superspeedway. The angular timepiece is brash, just as one would expect from the Swiss brand, taking specific visual inspiration from one of the most famous TV shows of the 1980s, Miami Vice.

Jordan’s new watch is the final edition of the UR-220 and was released in May. The timepiece’s ergonomic case is made from satin-finished red gold. Beneath its sapphire crystal, you’ll find a “dial” with wandering hours on a rotating satellite complication, a 3-D retrograde minutes hand, double power reserve indicators and completely redesigned numerals. Meanwhile, the black DLC-coated caseback has a two-roller oil change indicator that will tell you how many months the movement has been running. Topping off the whole package is a white strap made from sculpted rubber with a Velcro fastening. It’s the sort of watch that would have looked perfectly at home on either Crocket or Tubbs’s wrist on the show.

“Gold and white may seem an unlikely combination, yet the combo resonates deeply with me as a happy memory,” Urwerk’s co-founder and chief designer Martin Frei said in a statement. “I remember the super-cool heroes of my teenage years that we all wanted to resemble. They were ruggedly handsome and nothing could faze them.”

While all of Urwerk’s watches are exclusive, this is especially true of Jordan’s UR-220, which is one of just 10 the company made before closing the books on the model for good. Each example costs around $155,000, but considering Jordan is the highest-paid athlete of all time, we imagine he didn’t even have to think twice about adding it to his roster.