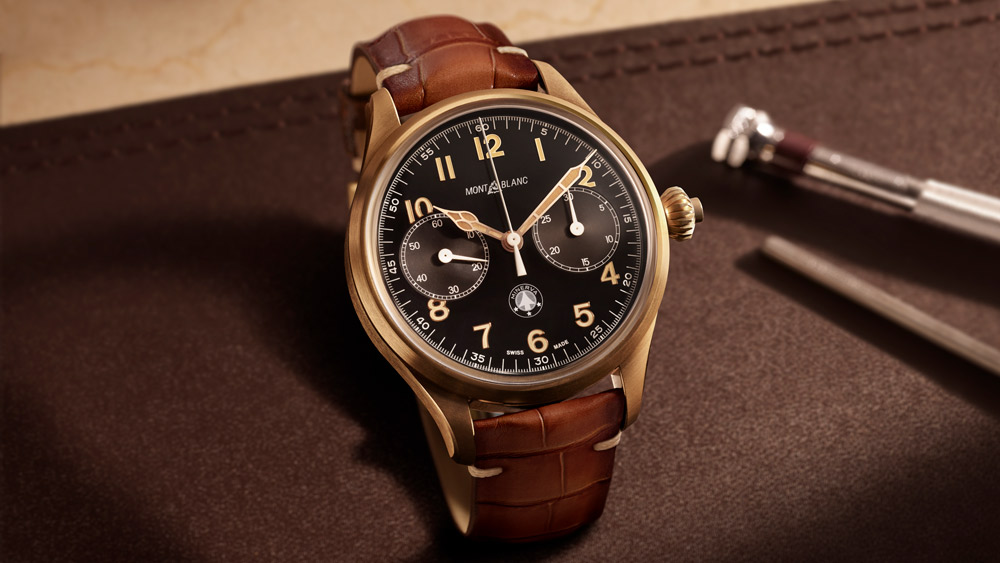 Timepieces inspired by vintage models are a perennial favorite of the watch industry, but faithful re-editions of early references are a bit more rare. For its latest tribute to Minerva, the Swiss manufacture founded in 1858 which Richemont (Montblanc’s parent company) purchased in 2006, Montblanc revamped a 46 mm 1930s military monopusher chronograph. It is almost entirely faithful to the original, save for a modernized movement, touches of titanium in a new engraving and Super-Luminova.

Like its predecessor, it comes with a black dial and rose gold cathedral-shaped hands and Arabic numerals which have now been outfitted with modernized lume for better visibility at night. In addition to its own logo, the company kept the original Minerva marking on the dial, placed just below “Montblanc” at 6 o’clock. And it comes with the same bi-compax counters for large small seconds and chronograph minutes indications, and a railway minute track.

But the star of the show is on the caseback. Beneath the officer-style cover, which comes with a laser-engraved 3D image of the Greek goddess Minerva in titanium, is the manufacture caliber MB M16.29. The inside of the cover comes with the French inscription, “Ré-édition du chronographe militaire Minerva des années 1930 doté d’un calibre fait main dans la pure tradition horlogère suisse”, which translates as “Re-edition of a Minerva military chronograph from the 1930s equipped with a hand-made calibre following the Swiss watchmaking tradition.”

Inside is a reconstruction of the original caliber 19-09CH right down to the V-shaped bridge design (first patented in 1912), along with a German-silver mainplate and bridges (in a slightly yellow finish, rather than a typical rhodium coating), as well as traditional finishings in Côtes de Genève decor and circular graining and beveling. It features a column wheel, horizontal coupling and a frequency of 18,000 vph. And in keeping with the 1930s version, it also features the Minerva arrow on the edge of the chronograph blocker.

Adding to its retro appeal, it has been outfitted in bronze which will develop an aged patina over time. And it keeps the same 46 mm case size, considered enormous for civilian watches in the ’30s but more in-line with today’s standard sizing, despite a recent trend towards smaller diameters. The 1858 Monopusher Chronograph Origins LE 100 comes on a brown Sfumato alligator leather strap and is limited to just 100 pieces at $30,500.