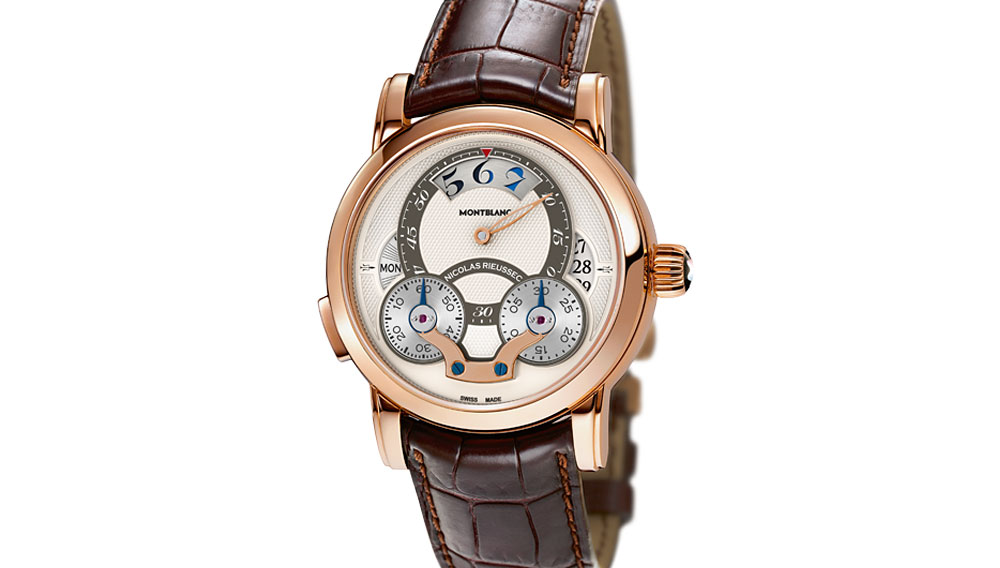 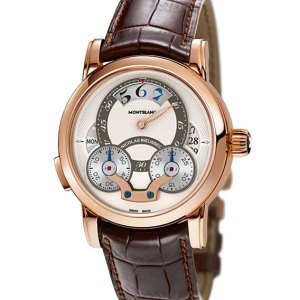 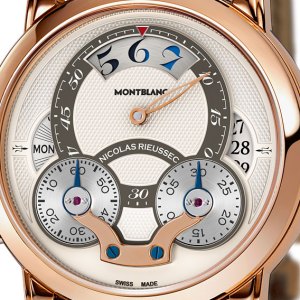 Montblanc has introduced the newest model in its Nicolas Rieussec chronograph collection, which launched five years ago boasting a rotating disc in the place of hands to measure the hour. The new Nicolas Rieussec Rising Hours watch features an additional disc with a day-to-night indicator.

Visible through an aperture at 12 o’clock, the hours display features 12 cut-out Arabic numerals turning in continuous motion. Directly beneath it, a second, day-night disc turns in intervals, casting a pale blue color through the numerals at night and black during the day; the two discs rotate one atop the other, controlled by two wheels in a Maltese-cross formation.

In addition to the double-disc mechanism, four other disc displays indicate the day of the week (at 9 o’clock), the date (at 3 o’clock), and the passage of60 seconds and 30 minutes, respectively, for the chronograph. A double barrel operated by a self-winding mechanism maintains a frequency of 28,800 vibrations per hour (4 Hz) with 72 hours of power reserve and a constant level of torque.

Between all the apertures and displays, the watch features a grain d’orge guilloche dial and a 43 mm round 18-karat-rose-gold case set on a brown alligator strap ($34,700). The chronograph is also available in a limited number of platinum and stainless-steel versions. The platinum variant, limited to 28 timepieces ($62,600), is set on a gray alligator strap; the 922-edition stainless-steel version has a black alligator strap ($13,900). Each model bears Montblanc’s emblem inlaid in the crown in mother-of-pearl. (800.995.4810, www.montblanc.com)