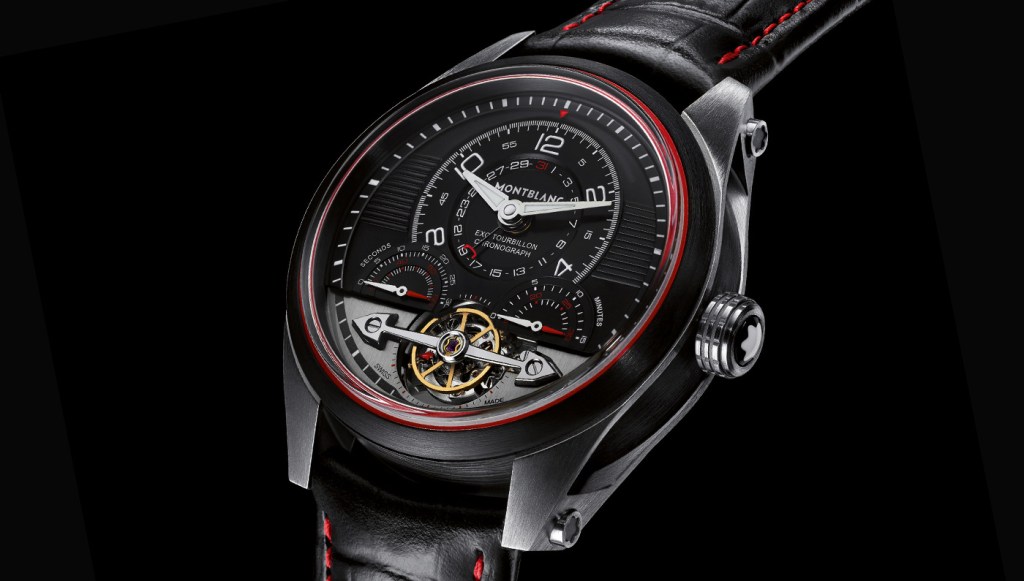 Taking a cue from modern alpinism, the new Montblanc TimeWalker ExoTourbillon Minute Chronograph Limited Edition 100 summits challenges with high-tech materials and precise action. Designed for peak performance, the German manufacturer’s recent release relies on an impressive strength-to-weight ratio and is the first in its TimeWalker collection to feature the patented, in-house ExoTourbillon complication—one that is 30 percent more energy-efficient than its counterparts.

Secured within a case crafted from carbon fiber, titanium, and diamond-like carbon (DLC), the watch face presents an offset subdial at 12 o’clock. Appearing concentrically inside are the hour, minute, and date hands, along with their indices. Two semicircular counters, each with dual hands, are located at 4 o’clock and 8 o’clock and indicate elapsed minutes and seconds, respectively.

For convenience, the time display can be advanced or reversed in hourly increments with each press of the crown (when in the second position) while minute and second hands remain unaffected. Adjusting through a full 24-hour cycle will also alter the date function accordingly. Minute and second hands can be set from the crown’s third position.

The timepiece’s accuracy is enhanced by the automatic movement’s 1-minute ExoTourbillon (revealed at 6 o’clock on the dial), which is much lighter than conventional designs as its screw balance is positioned outside of the tourbillon cage (which lends the complication its name, “exo” being Greek for external), thus reducing the amount of energy needed to rotate the cage. This positioning of the balance also improves the precision of the movement’s stop-second function. When activated by the monopusher crown, only the screw balance’s motion is stopped, rather than the entire tourbillon cage, since it is set outside the ExoTourbillon’s cage. If the tourbillon cage itself was halted, the balance could continue to swing, resulting in inaccuracy.

Along with its name, the watch is also long on looks with its grainé dial dressed in white and red arabic numerals complemented by a backdrop of black horizontal stripes and a satin finish. A coating of black rhodium accentuates the other side, where Montblanc’s emblem-emblazoned winding rotor is revealed through the domed sapphire-crystal caseback.

Limited to 100 examples, as its appellation attests, the meticulous Montblanc is priced at $39,400. (montblanc.com)